As Masters wins are tallied, how about the environment?

With apologies to the long, gritty history of the Open Championship-aka British Open-and the difficulty of the U.S. Open, but in this reporter’s opinion, no tournament has more of a "Big Game" feel in golf than (pregnant pause)— The Masters.

Yes, friends, I’ve bought into Masters hype just a tad, despite the awful, treacly theme music, the piped-in bird sounds on CBS-ESPN, and the gravitas-laden "a tradition unlike any other" tag line. By the way, aren’t all traditions unlike all others anyway? For example, Thanksgiving is unlike the Sadie Hawkins dance. But, I digress.

The course seems like nature’s attempt, with the superintendents’ help, to create the most beautiful golf course in the world, from the majestic pine trees to the white sand traps to the dazzling, in-bloom azaleas.

The course seems like nature’s attempt, with the superintendents’ help, to create the most beautiful golf course in the world, from the majestic pine trees to the white sand traps to the dazzling, in-bloom azaleas. But it occurred to me that, given the Masters mega-profile, the huge carbon footprint associated with golf, the growing sports-greening movement and the small but growing greening-of-golf sub-movement, that the tournament would likely be doing something in the sustainability arena.

So I started digging. I didn’t find much — just this: A March 2012 article by Matt Hickman in Mother Nature Network’s which offered an environmental sustainability scorecard at Augusta National that, unfortunately, had more bogeys than birdies.

Other than that, Google searches for "Sustainability" and "Masters" and "Augusta National" yielded a raft of stories on the tournament’s poor social sustainability record (the well-documented and silly banning of women as members until 2012, the lack of black members until 1990, the ramshackle nature of the neighborhood outside the gates of the club). But nothing more of substance on "the Masters" and "the environment" and/or "climate change" could be found.

That Augusta National and the Masters ignore environmental issues, including climate change, is as behind the times as it is predictable. 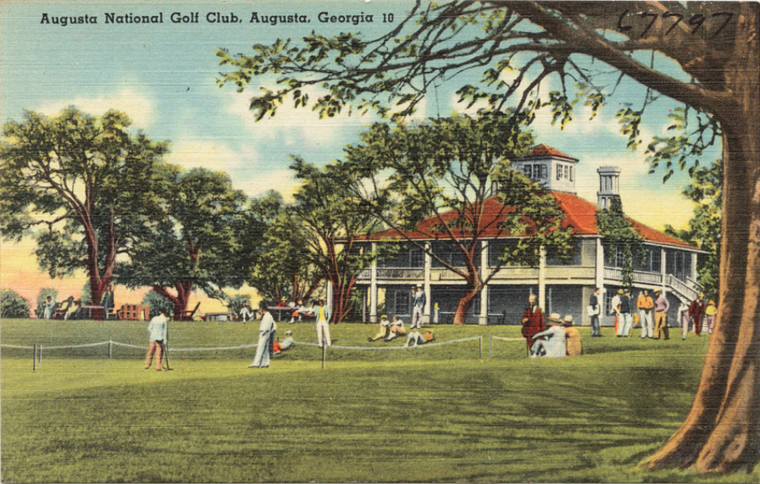 The club and the tournament, two separate but related entities, are relics from a largely bygone era: Per Hickman, Augusta National "is an old-school, invitation-only, (mostly) good ol’ boys club. … steeped in discrimination, decorum, discretion and, of course, dough of the mostly old variety." At the Masters, patrons  — do not dare call them "fans" or "spectators" — cannot ask for autographs, and TV announcers have been given the heave-ho for straying from tournament protocol. Legendary golf broadcaster Jack Whitaker was given his walking papers in 1966 after he termed a gallery of patrons as a "mob scene."

Here’s another Google search that yields next to nothing of value: "Augusta National" and "Progressive." If it took losing a high-profile public fight for the club to finally admit its first women members in 2011, the famed Rae’s Creek on the 12th hole will freeze over before Augusta National will take a proactive stance on the environment and climate change.

But imagine if this were not the case.

Instead, imagine if Billy Payne, chairman of Augusta National, said something like this at his pre-2017 Masters press conference:

"The Masters, as perhaps the most beloved tournament in golf, and Augusta National, as the most iconic golf course in the world, have a tremendous responsibility to be good citizens of Georgia and of the world. Living up to that responsibility means we have to acknowledge human-caused climate change and the threat it poses to golf and to humanity more broadly, both now and in the future.

The Masters, as perhaps the most beloved tournament in golf, and Augusta National, as the most iconic golf course in the world, have a tremendous responsibility to be good citizens of Georgia and of the world.

"Over the winter, over many discussions with climate scientists, business leaders, including the good folks at the Waste Management Phoenix Open, it became clear that the golf industry has to step up to the tee on climate change.

"We spoke with NHL Commissioner Gary Bettman and his sustainability team. They see how climate change is adversely affecting the heritage of outdoor pond hockey, which has served as a springboard for countless numbers of players. Well, if the NHL, which plays its games indoors, sees climate change as an existential threat and is taking action to combat it, how can we in golf, which is played outdoors, in climate-change-threatened locales from California to Florida, from Long Island to Texas, turn a blind eye to it? We can’t.

"That’s why we’re launching ‘Go for the Green,’ an 18-step initiative that will take on many aspects of the climate change fight, from limiting water use at courses to funding research on low-carbon jet fuel; from making the Masters a zero waste event to advanced recycling programs. CBS’s Jim Nantz, our longtime voice of the Masters, will narrate public service announcements on Masters broadcasts letting golf fans and golfers worldwide know how they can ‘Go for the Green,’ too. Golfers who help green up their own courses will be eligible to win their own ‘Go for the Green’ green jackets, made of recycled fibers. Former presidents and current golf lovers Barack Obama and George W. Bush will help lead the effort."

OK, OK. I know what you’re saying: "Lew, you are more likely to win the Masters than Billy Payne is to say this stuff." Sadly, you’re right. But, as I read Billy Payne’s fictional-but-not-outlandish future quote over and over, I thought to myself, "Billy, this isn’t an outlandish statement. C’mon, be a leader rather than a laggard on a social issue for a change! It’s no harder than a 2-foot putt." Probably not a good analogy the day after Ernie Els’ excruciating 7-putt, first hole implosion. But you get the idea.

Hopefully, Billy Payne will see the light and my golf game will not be needed as I haven't played in probably eight-plus years.

The Rockefellers vs. ExxonMobil