The McDonough Conversations: Save the soil, save ourselves

Look to the ground to find promise for the future — and a massive business opportunity, says "cradle-to cradle" designer Bill McDonough.

Joel Makower: Let's talk soil. What have you been thinking about?

Bill McDonough: One of the most astonishing books I've ever read is An Agricultural Testament by Sir Albert Howard. He was a British agronomist who had been sent by the Crown during the Raj to India to explain Western agriculture to the Indians. And when he got there, he realized that we had it backwards and they had it forwards. That essentially what they were doing was treating the soil as a living organism, which it is, and that you're essentially feeding the mycorrhizal bacteria and the fungi, which are then building the soil, accruing nitrogen, carbon, and so on.

Makower: What brought you to thinking about soil?

McDonough: I'm very focused on soil because now that China has declared 19.4 percent of its farmland toxic to food, we have to fix this. It's really critical, because you can talk about all the green revolution stuff in the world, but if you toxify the farmland and take 20 percent of it out of production. I mean, this is huge.

McDonough: And so that's why we are working on that and focusing on it, because I'm looking at all these techniques we can use to clean it up.

Makower: It sounds like there are two parts. There's the detoxifying or cleaning up, but it's also changing the way we make things, like packaging.

McDonough: Right. The packaging we are designing will either go back to soil or go back to industry, using the Cradle to Cradle protocol and looking at whole new systems of packaging for all food and dry goods where the packaging is safe for soil. We want to go to a global-scale packaging protocol that allows things to either heal soil or give soil lightness and nutrition, or go back into industry forever and stop contaminating.

Makower: How do we detoxify the soil?

McDonough: At this point I’m just looking for the wisdom-keepers around this. We're looking at all kinds of things., based on our experience with phytoremediation — using plants for cleanup, like we did at the River Rouge at Ford, using plants to pull heavy metals out of the ground, then harvest them and purify the soil.

That's very interesting, but I don't know that we can afford to remove these materials from the soil. It's a massive contamination. We are looking at ways that we could bind them so that these minerals and heavy metals can't be taken up by the plants in place.

Makower: Where does that technology come from?

McDonough: I’ve just put my toe in the soil, so to speak. We are doing a review of whether there are chemical protocols that can bind it and just beginning to frame the questions of this review. From my early readings and from some of the scientists I've called, I'm very excited about what fungi can do — the kinds of things you see Paul Stamets doing on mycoremediation. He used oyster mushrooms to handle benzene contamination and so many other things.

Makower: You referred to some of this as Cradle to Cradle basics. Talk a bit more about how soil relates to C2C.

McDonough: If you start with soil health, it's very similar to starting with material health for product. Half of Cradle to Cradle is the biological metabolism, which is agriculture.

The biological nutrient program starts with the soil. So Cradle to Cradle is inherently on one half of the program coming from soil as an organism. Soil is at the root of it, so to speak.

Makower: So, this changes the way we farm, no?

McDonough: There’s a farmer named Gary Zimmer, who is working with other farmers on how do you constantly build a healthier soil, where the minerals are not being bound up by applied chemicals that are used at herbicides, and where the minerals are bio-available, because you're encouraging the soil to reuse its nitrogen and phosphates all the time.

His program is based on the fact that when you make a healthy soil, you actually get higher yield.  It can cost more in specialty fertilizer, but less in other inputs.  The real key is that you get higher yield at lower unit costs — dollars per bushel. That is how you get more profit.

Yet what'll happen in the industry is that they'll say, “We are here to achieve high yield.” But the question is at what cost. That's the question that often gets forgotten.

Makower: It reminds me of the notion of “carbon farming” that the Marin Carbon Project is doing, and which is happening at New Mexico State University, where a guy named David Johnson is looking at how you sequester carbon in the soil in a way that also enhances the soil and makes it more productive.

McDonough: Such a beautiful thing, and it's so obvious. It's like discovering the obvious: very light applications of carboniferous things, organisms, and carbon have an effect that outweighs the expectation of this small act of carbon introduction.

Makower: It strikes me as a massive business opportunity. Obviously, there's a number of them.

The business opportunities I see are quite astonishing. They've come to me because of the work I'm doing in packaging with Walmart. It keeps growing every month. 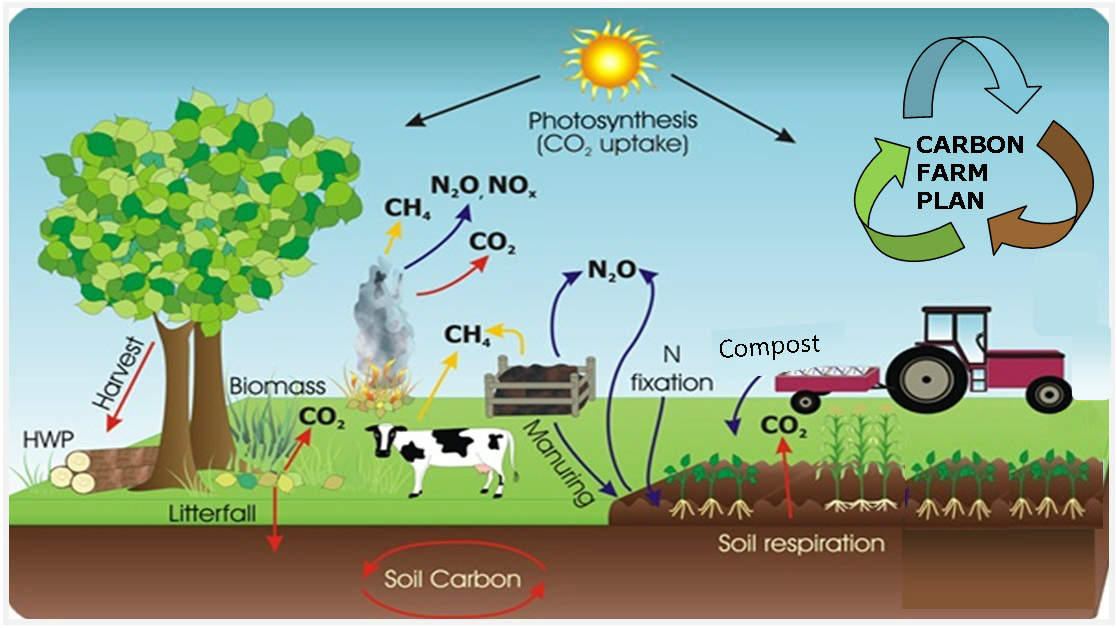 So, China had a real problem with air pollution from farmers burning rice straw. Some of these straws are 35 percent silica. Some of the rice husks, for example can be up to 65 percent silica. This is nature's fiberglass. We're designing new packaging from rice straw, wheat straw, corn stalks, bagasse, all that stuff, because why are we using old paper that's full of inks and mineral oil-based materials?

What they've inspired in us is a whole pile of technologies that we're reviewing carefully with the large chemical companies and large producers of packaging. These are immense opportunities, because nobody's doing it, really. Opportunity that hasn't been seen yet.

Makower: This seems like one of those issues that is so overwhelming to ponder that it's almost hard to know where to start. How do you suggest we think about this?

McDonough: There are three scales to consider. The first scale is to look down at your feet. And that's fun. So, think of soil as the thing you stand on.

Composting for the kids is so beautiful. I'm experimenting with a new kitchen appliance that desiccates the organics and then turns it into a powder. We want to do some research into what is missing in that process in terms of, are there various kinds of organisms that are being destroyed in that process.

But the idea that you can have these sort of vegetable dusts that come out of your kitchen instead of some composter that you have to manage as a living thing that smells, or is looking for maintenance that you don't have time for in your urban apartment. You could actually be developing nutrition for your window box.

The next level is your community. That's where you could ask the city parks to be butterfly habitats, like you and I have talked about, but also allotment gardening. A great example of that was Curitiba, Brazil, when Jaime Lerner decided not to encourage favelas to develop in the flood plains, because people would get flooded. And so he said, “No more building in these flood plans. It's dangerous. So if you're going to build an informal community, please do it on these hillsides where you don't get flooded out.”

And since he couldn't provide garbage collection services, he said, “You bring out the garbage, put it in the right sorting bin, you’ll get paid with bus tokens,” because he had developed a bus system that’s world famous. So, the mothers could get on the bus system and go to organic farms for the day, garden and get paid. They get paid with organic produce.

That the middle-level thing, where we encourage our communities. So, do it at home, and then do it in your community.

And then there's larger-scale things, like why don't we design packaging that goes back to soil? The materials that go into composing systems were never designed for composting. If you end up composting paper, but the paper's full of old inks and stuff from magazines, you know, that begs the question: What exactly is the quality of this thing? We ought to design it as compost, or fuel, if that's where it ends up.

We are also seeing new solar farming techniques that use solar collectors for shade and with integrated grazing and cropping for soil health and water retention. SunPower is leading in this. This is very exciting.

Makower: That is, I have to say, a lot of food for thought.

McDonough: Well, we used to say “waste equals food.” I said that after listening to Michael Braungart back in 1991, and then started using that. And then we realized that if you're using the word “waste,” you're still talking about waste. But we're actually trying to eliminate the whole idea of waste, so why use the word?

So, now we say “everything is food” — food for life, food for energy, food for water, and especially food for thought.