As a woman who has chronicled the technology business for close to three decades (ahem), I’m used to being at briefings where the gender demographics are way out of balance and I am decidedly in the minority.

So I must admit feeling an unusual kinship with the mostly female audience at last week’s inaugural Women4Climate conference in snowy New York City — although the event’s rallying cry about the need to protect vulnerable communities from the effects of climate change is one that people of all genders, ages and ethnicities really should hear.

"As women, we know all too well that the powerful often seek to silence our voices when we speak out to protect the most vulnerable in our communities," Anne Hidalgo, the first mayor of Paris and chairwoman of the C40 Cities Climate Leadership Group, said in a statement prepared for the gathering at Columbia University. "We are here today to show that we refuse to be silenced. All around the world, in city halls, corporate boardrooms and on the streets of our cities, women are demanding action to protect the planet from the threat of climate change." 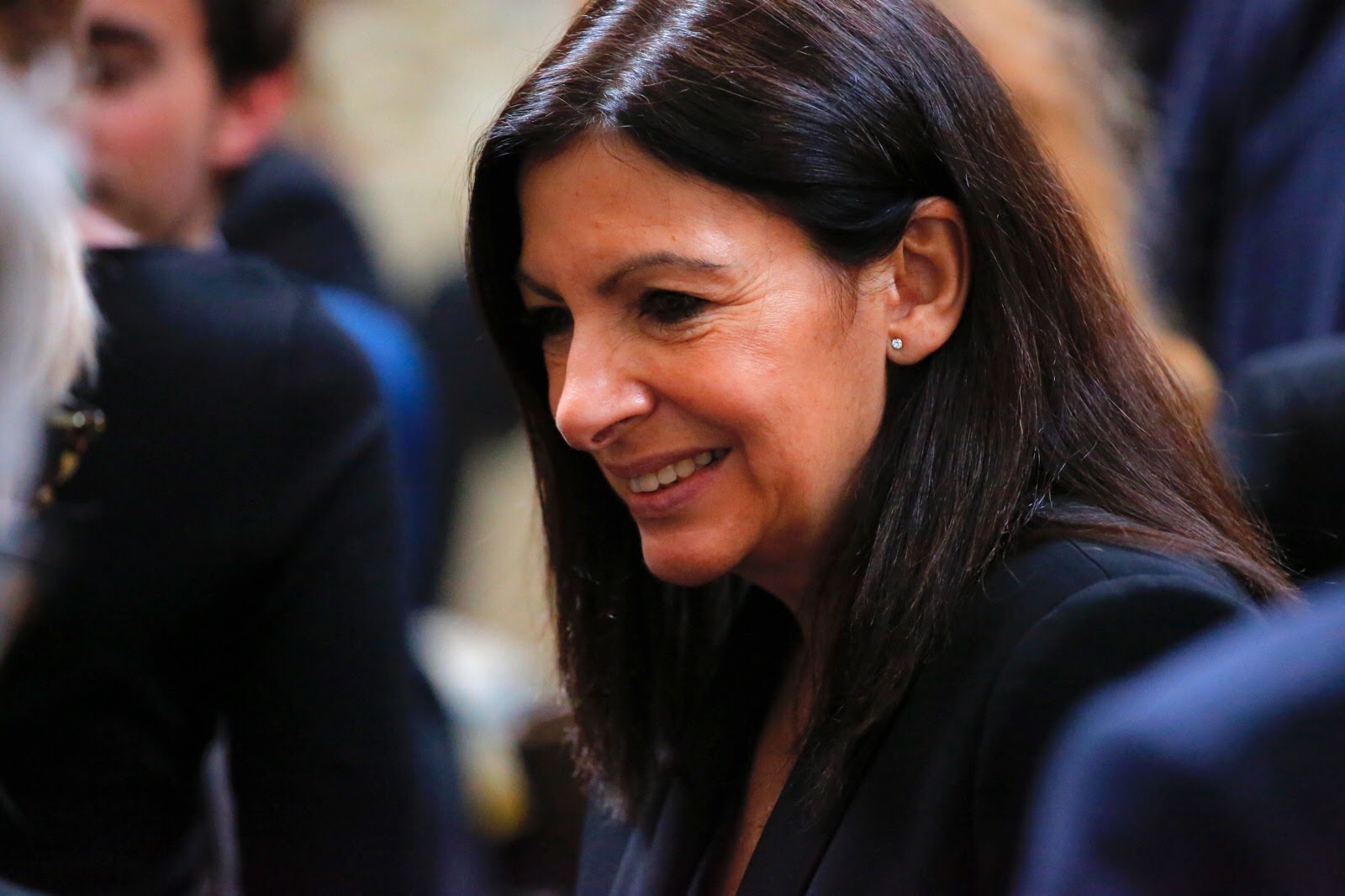 As she commanded the podium to open the conference last week, Hidalgo, apologizing for her heavily accented English, was far more candid and far less formal. "Be confident on this, American women, we will stand by your side," she declared during her opening remarks, referring to the steps that President Donald Trump is already taking to step back the country’s federal commitment to reducing carbon dioxide emissions and other decades-old environment protection measures. "Climate change and women’s rights are not questionable."

Data shows that women and children are the ones who feel the effects of global warming most acutely, although that’s not exactly common knowledge, she reminded the attendees. But she also believes women are "strongest when it comes to collectively changing the world... We have always needed to work 10 times harder."

In 2014, there were just four women mayors in the C40 network, a forum created to address the threat that climate change poses to cities around the world. Now there are 15, representing more than 100 million urban citizens and more than $4 trillion in gross domestic product. Among those who trekked to New York last week with Mayor Hidalgo were Patricia de Lille and Zandile Gumede, the mayors of Cape Town and Durban in South Africa; and Helen Fernandez, mayor of Caracas, Venezuela.

The former mayor of New York, Mike Bloomberg, president of the C40 board and a special United Nations envoy on cities and climate change, also lent his voice to the discussion.

Bloomberg drew a direct connection between climate health and human health. "Women leaders are speeding our progress," he told the gathering. "Cities are committed to these goals. No matter what happens in Washington, I really am confident that the U.S. will deliver on its Paris commitments."

As women, we know all too well that the powerful often seek to silence our voices when we speak out to protect the most vulnerable in our communities.

In just one example of how this could play out, dozens of U.S. cities last week revealed an initiative under which they collectively could place about $10 billion in orders for electric vehicles. The participants, which include New York, Chicago and Los Angeles, could buy up to 114,000 vehicles, which represents 72 percent of all the EVs bought in 2016, reports Bloomberg. "Now matter what President Trump does or what happens in Washington, cities will continue leading the way on tackling climate change," the chief sustainability officer for Los Angeles, told the news service in an email.

Here, in alphabetical order, are nine public-sector and NGO women likely to be up-front-and-center in the cities movement, all around the world, both at the civic and grassroots level. Seven of them spoke during last week's event.

In office since 2015, she last week announced plans to set aside $7 million for the District’s first Green Bank to support building improvements that will reduce carbon dioxide emissions. The program would emulate statewide initiatives in places such as Connecticut and New York. In a statement, Bowser positioned it as the nation’s first city-level effort, one meant to support her interest in "inclusive prosperity" across the 660,000-person city. (The D.C. region is home to nearly 6 million people.) She added: "As the nation’s capital, we need to lead the way when it comes to protecting and preserving the environment."

In early March, WHO published a new report linking environment risks such as indoor and outdoor air pollution, and unsafe water to the deaths of more than 1.4 million children younger than 5 annually. Chan’s rule is one of credible advocacy. "A polluted environment is a deadly one — particularly for young children," she observed in a press release about the research. "Their developing organs and immune systems, and smaller bodies and airways, make them especially vulnerable to dirty air and water."

Intimately involved with the COP21 climate negotiations in Paris, de Lille is leading the charge for Cape Town to procure between 10 percent and 20 percent of its energy from renewable sources by 2020. A big part of this is an initiative encouraging home owners and businesses to install rooftop solar photovoltaic panels. The city, home to 3.7 million people, leads the C40 Municipal Building Efficiency Network, which is identifying and defining best practices for energy contracting and management. It also has spearheaded a 30 percent reduction in water consumption over the past 15 years. "Every single decision and every single department is overlaid with climate considerations," de Lille said at the Women4Climate conference. "This needs to be worked into everyday decisions."

Since rising to power in 2015 after the arrest of her predecessor, the leader of Venezuela’s capital city has become an outspoken advocate of gender equality, which for her goes hand with the climate movement. Speaking through a translator at the conference, Fernandez said she views every policy through that lenses and decries the "jargon" that sometimes can cloud the real impact of climate change, and the ability of advocates to win support. The commitment of this 5.3 million-citizen city is pretty nascent, a side effect of the nation’s political turmoil. But she sees women becoming protagonists in the emerging climate movement there. "We can and should simplify this strategically," Fernandez said.

This South African seaside city of around 600,000 is facing the reality of fiercer droughts and more frequent floods with a wide array of ecosystems projects aimed at making it more resilient. Among them: green rooftop gardens; reforestation efforts; riverbed restoration; and bioswales, to name a few. Gumede, a vice chairperson of C40 Cities (the governor of Tokyo, Yuriko Koike, is her co-chair), views addressing climate change as unprecedented opportunity to help women become entrepreneurs. "As women fighting for change, we must make sure that we don’t lose hope, we keep pushing," Gumede said.

Elected in 2016 to head the C40 Climate Leadership Group, Hidalgo’s top priority is to ensure that the world’s biggest cities are firmly committed to the Paris Agreement. That will include encouraging new financing approaches, helping mayors get a better handle on their energy consumption and clean up their power sources, and setting pathways for inclusive and sustainable growth. "This will take political courage and concrete action," she said during last week’s conference.

It’s no accident that the woman beyond the NGO’s enormously successful Beyond Coal Campaign comes from one of biggest coal-producing regions, West Virginia. The original goal was to advocate for the retirement of half the coal-fired power plants in the United States by 2020. It already had exceeded that target, with more than 248 facilities closed or intending to do so, and a lot of the action that inspired this progress happened at the local level. "In this grassroots movement, many of the leaders are women," Hitt observed. "Because it’s women who are often on the front lines of family emergencies that are tied to coal pollution."

Her organization’s trust fund, established 25 years ago, is one of the oldest financing mechanisms for funding development projects meant to mitigate the negative effects of global warming. One example is a public-private initiative launched in mid-March to strengthen support and awareness for "green chemistry" and safer alternatives to hazardous substances. GEF describes itself as the world’s largest funder of environmental projects. Ishii, previously the deputy vice minister of finance for Japan, was promoted to her post five years ago. Her job: transform GEF from a "silent partner" in the movement to one that will work more closely, and vocally, with a global coalition of partners. We cannot afford to be "gender-ignorant" in these discussions, Ishii said at last week's conference, noting: "We have missed opportunities by not paying attention to this."

The former minister of climate for Nigeria, who is also an advisor to the Bill and Melinda Gates Foundation, was named to her United Nations post in December. In her previous role, she was instrumental in convincing West Africa’s biggest economy to approve a series of green bonds intended to support climate-resilient infrastructure projects, such as renewable energy development or electric vehicles for commuters. The first bonds worth $63 million were issued this quarter.