It’s been almost exactly one year since the world’s most valuable technology company declared its intention to make future iPhones and MacBooks entirely out of recycled materials. And behold: Just in time for Earth Day 2018, Apple is introducing the latest manufacturing innovation that it believes will help the company automate its way toward that goal.

Dubbed "Daisy," the robot builds on a previous generation of technology called Liam, which Apple developed to deconstruct iPhones and strip out components to reuse for other purposes — and not necessarily just for new electronic gadgets. She’s featured on the cover of Apple’s 2018 environmental progress report and can handle nine types of iPhones.

"We created Daisy to have a smaller footprint and the capability to disassemble multiple models of iPhones with higher variation compared to Liam," the company writes in its report. 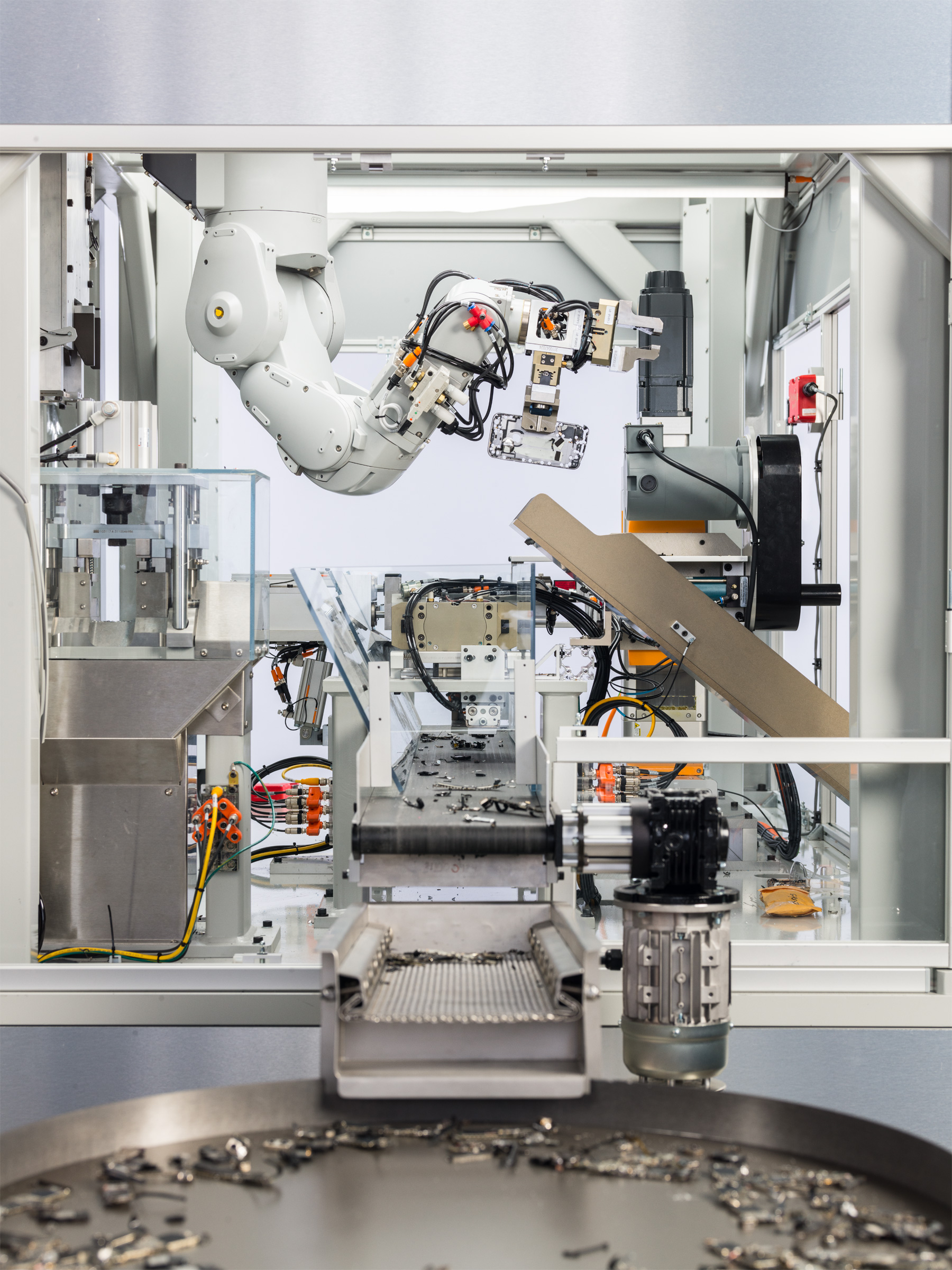 Apple believes it can recover materials that traditional recyclers don’t yet have the capability to recycling — and at a higher quality.

From the report: "We hold ourselves to a strict definition of closed loop: To meet our goal, we must use 100 percent responsibly sourced recycled or renewable materials and ensure the equivalent amount is returned to market. Recognizing that this goal could take many years to reach, we remain committed to responsible sourcing of primary materials as we make the transition."

While the Cupertino, California, company hasn’t set a timeline for its ambitious push into a circular manufacturing model for its products, it has prioritized what it’s recovering from the older ones. It has active projects focused on mining aluminum, cobalt, copper, glass, paper, plastics, stainless steel, tin, tungsten and rare earth elements including neodymium, praseodymium and dysprosium.

According to the Apple report, Daisy can recover 1,900 kilograms of aluminum (used in enclosures), 770 kg of cobalt (a material crucial for making batteries), 710 kg of copper (crucial in circuit boards) and 11 kg of rare earth elements (which play a role in controlling magnets, and also are used in the cameras and haptics devices). That’s just a partial list.

The company plans to install Daisy in multiple locations, starting in the United States (she’s already in Austin, Texas) and Europe. Here’s the list of products the system can handle: iPhone 5; iPhone 5s; iPhone SE; iPhone 6; iPhone 6 Plus; iPhone 6s; iPhone 6s; iPhone 7; and iPhone 7 Plus.

And here’s the caveat: Right now, Apple can only work with end-of-life devices that are returned to it directly. So the company is putting considerable muscle behind the Apple GiveBack trade-in and recycling program. That includes offering credit toward a future purchase. 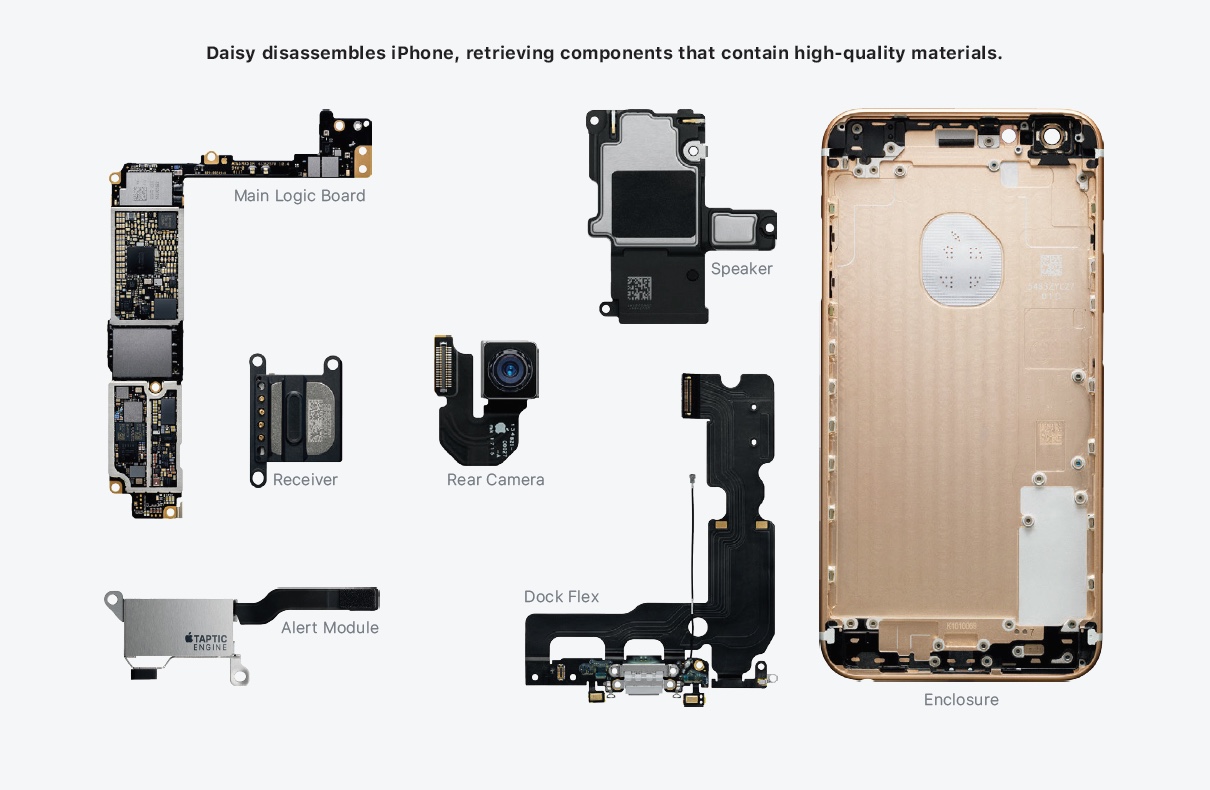 Apple didn’t disclose much detail about current recycling rates in its new report, but the company recycled 68.5 million pounds of materials across its own operations during 2017, according to its latest environmental index.

The collection challenge could limit Daisy’s potential, at least initially, according to a statement by Gary Cook, the senior IT sector analyst at Greenpeace USA.

"Rather than another recycling robot, what is most needed from Apple is an indication that the company is embracing one of the greatest opportunities to reduce its environmental impact: repairable and upgradeable product design," Cook noted. "This would keep its devices in use far longer, delaying the day when they’d need to be disassembled by Daisy."

Apple already has reduced "primary aluminum consumption" across all of its products by 23 percent since 2015, according to the report. And it has "specified" 100 percent recycled tin for the solder used on logic boards for several iPhone models. "Unfortunately, tin is not recovered by all electronics recyclers," the company noted in its report. "So, we're prioritizing responsibly operating recyclers that recover tin, in addition to the copper and precious metals, from the main logic boards retrieved by Daisy."

Let’s get together: Intel’s 2030 commitments include ‘shared’ climate and social goals