That NASCAR has had a green initiative for 10 years surprises some, heartens many and engenders skepticism about greenwashing from others. GreenSportsBlog had wanted to get the real story on NASCAR Green for several years and so we were pleased to be able to talk with Catherine Kummer, one of its many driving forces.

Lew Blaustein: Catherine, one of the most common questions I get when I tell people I write about the intersection of green and sports is "What is NASCAR Green all about? Is it legit?" So I want to get into that with you. First, though, I want to find out how you got to NASCAR Green. Are you a lifelong auto racing fan? An environmentalist from way back?

Catherine Kummer: I love that it’s one of the first questions you get, means folks are paying attention and catching wind of our work. I was not a motorsports fan growing up in Raeford, North Carolina, a small farming community in the southeastern part of the state, near Fayetteville and Fort Bragg. I was fortunate to grow up spending time on the North Carolina coast and unfortunately saw the erosion of the coastline firsthand.

In fact, the area just a bit further inland was devastated by Hurricane Matthew and, more recently, Hurricane Florence in September. I was also incredibly fortunate to have amazing parents and siblings. My family has a grocery store, Home Food Market, that has been in our family for over 100 years — I grew up there and my brother runs it now.

Blaustein: This sounds like a Mayberry type of childhood…

Kummer: It was … and, in addition to amazing vegetables, the store gave me a deeply rooted appreciation for growing local, shopping local and buying local from an early age. Respect for the outdoors and keeping the environment better than we found it is in my DNA. I’ll give you an example. When I was in middle school, I wrote letters about the environment to then-President George H.W. Bush. The White House would send back a signed (aka stamped) photo of the president. I was also reminded by my dad a few weeks ago that I started an early recycling initiative at my middle school ... I wore my "reduce, reuse and recycle" shirt all the time. 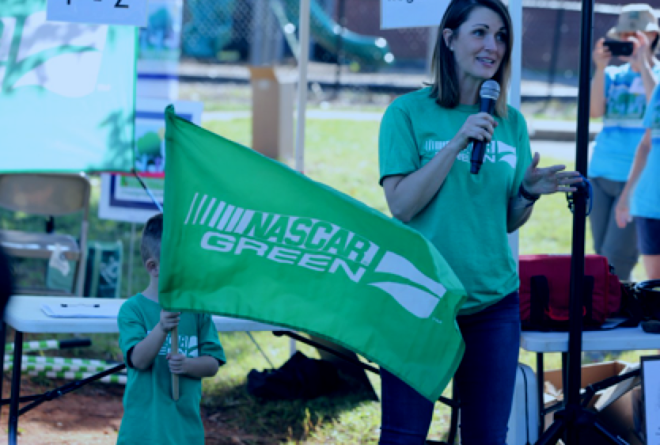 Blaustein: So maybe it was destiny that you’d end up working in sustainability. But how did you end up at NASCAR and NASCAR Green specifically?

Kummer: Well I went to UNC Chapel Hill for undergrad…

Blaustein: You were a Tar Heel born…

Kummer: … And a Tar Heel bred. That’s right. I was a journalism major and wrote for The Daily Tar Heel. I saw a job posting in 2004 at NASCAR in its publishing division. Graduated UNC in May, started at NASCAR in June. I also bleed a bit of gold and black, however, as I am currently finishing a master's in sustainability at Wake Forest University and have been fortunate to also join courses taught by Leith Sharp at Harvard in sustainability leadership.

Blaustein: Were you a NASCAR fan?

Kummer: Not originally. My first project was editing "NASCAR For Dummies," which gave me a deep dive into all things NASCAR, real quick. It was a really amazing job. I grew to respect the sport, what the drivers and team members go through, from the physical challenges to the stress. I love the competitiveness of it and the idea that NASCAR is a tight-knit family, its own ecosystem.

Blaustein: Talk about how NASCAR Green came about.

Kummer: NASCAR Green launched in 2008. But the idea came a year or two prior, when NASCAR leaders met with former vice president Al Gore.

Blaustein: During the time of "An Inconvenient Truth"? I can absolutely see the former vice president talking to an organization, NASCAR, who might seem an unlikely partner in greening. But he is a guy who sees possibilities and so, it sounds, did NASCAR.

Kummer: NASCAR had always wanted to influence, educate and inspire our fans on fuel efficiency, reforestation, sustainability, etc. So after meeting with former vice president Gore, our key stakeholders brought in Mike Lynch to be our VP of Green Innovation. Thanks to his leadership, NASCAR Green was built, and I got connected with him soon after.

Blaustein: What was NASCAR Green like at the beginning and what part did you play?

Kummer: Leadership supported us from the beginning, allowing us to pilot new things, even mess up occasionally. The vibe from the top down was "some things will work, some won’t, but we need to always look 10 moves ahead and keep the big picture in mind." Our sport, like all of society, has an environmental impact; therefore we started and continue to keep our focus on three key areas of environmental impact: waste; emissions; and energy.

One of the first things we got involved with is automotive fluid recycling. Safety-Kleen, owned by Clean Harbors, which safely recycles and transports oils, is in every NASCAR garage as well as many team shops. They re-refine the waste oil and put it back to work in various team cars as well as asphalt re-paving initiatives at track. Circular economy from the beginning. We also kicked off an aluminum and PET waste diversion program with tracks, which was environmentally and financially beneficial. The tracks do a great job of ensuring they are disposing of waste responsibly inclusive of food and other potential landfill items. Many of the teams in our sport also recycle their race cars. Our leaders and others liked that we were able to drive value to the business and inspiration to the industry, employees and fans.

Blaustein: That is really impressive. But I have to ask — how did NASCAR fans react to this green programming? Have you ever gotten negative push-back from them? Implied in the last question — and with my New York City bias likely baked in — is that green programming that might be well received in Boulder or Berkeley might not get such a good reception in places such as Talladega, Alabama or Bristol, Tennessee.

Kummer: I have never gotten negative pushback from fans. Not once, other than one fan being upset that they did not have a blue recycling bag for their campground location. I think one reason our fans support NASCAR Green is many are outdoorsmen and women so they understand that protecting our environment is very important. And a number of our corporate sponsors get that our fans, well, get it. They embraced a number of green initiatives. For example, working with Goodyear and Champion Tire, we recycle all of our tires through an innovative sponsorship with Liberty Tire Recycling. The tires are recycled and turned into mulch for landscaping and playgrounds as well as used in rubberized asphalt projects … many of the roads on the West Coast are being made with recycled tires, as I’m sure you know already.

Blaustein: What about composting?

Kummer: We’ve tried it at several tracks. Available composting infrastructure is challenging, but we are excited to watch it advance as our tracks are supportive of green initiatives. Pocono Raceway in Pennsylvania is one to keep an eye on for sure. They have been an environmental leader for quite some time.

Blaustein: I know. Their solar array in an old parking area powers the entire facility. Amazing.

Kummer: They also have, according to their sustainability report, one of the highest diversion rates and one of their family businesses, Pocono Organics, just broke ground on a new project this summer working with the Rodale Institute, a leader in Regenerative Organics…

Kummer: The result of the partnership is a 55-acre regenerative organics farm across the street from the track that will provide produce for events, "Farm to Track."

Blaustein: How cool is that? What are other tracks doing, green-wise?

Kummer: You’ve got to check out www.NASCAR.com/Green for the whole scoop as I’m not sure you have enough space for me to properly note all of the work. However, to name a few, Indianapolis Motor Speedway now has a nine-megawatt solar array across the street on their land. Green Sports Alliance-member Sonoma Raceway in California has solar on-site as well along with Daytona International Speedway and Charlotte Motor Speedway. These are just solar applications; readers can check the site for more detail on how tracks support the three areas of environmental focus I mentioned earlier: waste; emissions; and energy.

Blaustein: What are the tracks and NASCAR Green doing to minimize carbon emissions?

Kummer: Blended fuels. Sunoco Green E15 specifically which is a 15 percent ethanol blended biofuel used in our top three national series. We’ve now run well over 10 million miles on it. This has helped in reducing emissions by 20 percent per the EPA Renewable Fuel Standard. We’ve also invested in offsetting our carbon emissions, through verified carbon offsets programs globally and our long-standing reforestation efforts with the Arbor Day Foundation and others. Our NASCAR Green Community Tree Recovery Effort is the first of its kind in sports and was launched just this year where with partners such as K&N Engineering and Ford we’ve been able to go into race markets affected by climate-related natural disasters and support those race fans with trees, LED lighting kits and more.

Blaustein: Really impressive, Catherine. NASCAR Green has done terrific — and many would say surprising — work on what I call Green-Sports 1.0, the greening of the games or, in your case, races. Now let’s turn to Green-Sports 2.0, the much more important, in my view, effort to engage fans, especially those who don’t attend races, on the environment, especially on climate change. I understand NASCAR Green has surveyed NASCAR fans on the environment and climate change. What do those results show?

Kummer: We survey fans and non-fans regularly. As of April, we know that more than four out of five NASCAR fans (88 percent) believe the Earth is going through a period of climate change, and three-quarters of them feel a personal responsibility to combat it.

These survey results have given us confidence that our environmental programs and activations with partners, including nationally broadcast television commercials, reach a largely receptive audience.

Blaustein:  Great commercial, but I notice it doesn’t mention climate change. Why is that? And will future commercials mention it?

Kummer: More than half of our fans believe climate change is real. Our work including these television commercials contribute to that belief based on the increases we’ve seen year over year. Their actions as a result are most important. Will they contribute to our digital tree planting tool? Will they better understand their carbon footprint? Will they push our social and digital content…. to date, they have and that’s what makes sport and sustainability impactful.

Blaustein: That’s great. More sports leagues should survey their fans on climate. What are some of your drivers doing NASCAR Green-wise?

Kummer: A lot of our drivers support NASCAR Green and sustainability initiatives. Ryan Newman, for example, one of our top Monster Energy NASCAR Cup Series drivers, and his wife Krissie have a non-profit called the Rescue Ranch, whose mission is to promote, through education, respect for all animals, as well as agricultural, environmental and wildlife conservation.