With stores shelves filled with laundry detergent that is 2x concentrated, cleaning product maker Method is shrinking the footprint of detergent even further with its new, 8x concentrated detergent.

Method was able to cram more loads of laundry in a smaller space with its patent-pending Smartclean technology. Instead of using the traditional route to make detergent, which involves adding ingredients to water, Method found a way to put the water inside of the ingredients, drastically reducing the amount of liquid needed to wash a load.

"What we do at Method is constantly re-innovate," said Method co-founder Adam Lowry. "We felt like it was time to shake the category up a bit again."

Aside from using much less water than other detergents, the new Method detergent, which is a plant-based formula made with 95 percent natural and renewable ingredients, requires 33 percent less energy and oil to produce and is packaged in 36 percent less plastic.

The product's package is completely made of HDPE, the widely recycled plastic identified by the number 2 resin code. Half of the plastic in each bottle is post-consumer recycled content. 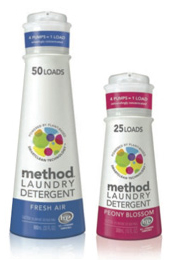 The 25-load version comes in a 300 mL bottle; the 50-load version is 600 mL. A normal, 2x concentrated detergent can't even fit inside of the six-pack box of 25-load bottles, Lowry said. The smallness of the bottle was a big selling point when they showed the new product to buyers for retail stores, Lowry said. Since the bottles take up so much less space (on shelves, in storage, on trucks), they are less costly all around.

All of Method's efforts to reduce water, energy and other resources have resulted in the product being the first detergent to earn Cradle to Cradle (C2C) certification. Method received silver-level C2C certification, which is given by McDonough Braungart Design Chemistry (MBDC) and also looks at the makeup of products and the company's social responsibility record.

Method also rethought how consumers put detergent into laundry machines. Instead of using a cap that consumers have to use to measure out detergent, the new product's bottle includes a pump that squirts out a specific amount of detergent.

"I think the time is right for America to kick the jug habit," Lowry said. "Why are we still doing laundry the way we did it 40 years ago?”

"Overdosing (of detergent) is a huge problem," Lowry said. "The dosage line on bottle caps is only a small fraction of the total volume of the cap and that is not an accident." If consumers use too much detergent per load, they need to buy more detergent more frequently. If overdosing were eliminated, Lowry said, it could cost some companies hundreds of millions of dollars a year.

Just as important, Method has a patent on the technology for its detergent, making it difficult for others to make the same kind of product.

The laundry detergent will also be the centerpiece of Method's first major ad campaign focused on a product, as well as it's own website, www.MethodLaundry.com. The $10 million effort will focus on the benefits to the consumer, including showing that the bottle leaves out the chance for using too much or spilling detergent, and showing how the product is used since the packaging is so different from what detergents typically look like.

"It makes sense to combine the most innovative product we've ever launched with that kind of investment," Lowry said.