As the epicenter of the new Rust Belt, the state of Michigan is struggling. With some of the nation's highest unemployment rates, a struggling auto industry and its ripple effects, the state has become shorthand for the Old American Economy and its inevitable demise. But, to borrow from the proverb, crisis is the mother of opportunity -- and in Michigan, we're seeing an unprecedented level of enthusiasm and funding for sustainable business initiatives.

If you cast your mind back a few decades and substitute "high tech" or "life sciences" for "sustainable business," you'll recall that, not so long ago, major economic transformations were created in Silicon Valley and on the East Coast, particularly in the Boston area. Like the two coasts, Michigan's seismic shift will happen not just because one industry fails. Rather, it will be a combination of government tax incentives, an existing knowledge base, and a groundswell of entrepreneurial and VC activity around green business, much of which is generated through the University of Michigan -- just as Stanford, MIT and other leading universities have helped foster innovation in their own backyards.

Michigan's economic history, like that of much of the country, isn't particularly green. But alternative energy, clean technology and other green areas have taken center stage in the state recently. At the highest level, led by Governor Jennifer Granholm, the state has begun offering compelling tax incentives and is attracting keen investors and startups, along with federal government stimulus money supporting green development. Further advancing the charge is a conflation of interests from a variety of stakeholders -- government, corporations, small business, environmental leaders and academia -- that are aligning to redefine how Michigan approaches its future.

The really interesting changes, though, are at the ground level. Michigan is suddenly emerging as a hotbed for clean tech, green tech and socially responsible investing because of a surge in social and environmental entrepreneurship. For example, the University of Michigan's Erb Institute for Global Sustainable Enterprise launched an internship program that places MBA/MS students like me with local VC firms, business incubators, small business associations and startups that need expertise in business and in the environment.

As part of my work at Ann Arbor-based Shepherd Advisors, a cleantech management consulting firm, I was engaged in a wide variety of projects that were geographically located within Michigan but had a far-reaching impact. One particular project with the Small Business Association of Michigan involved a plan to implement "Economic Gardening" in the state, which would provide a variety of services and support to small businesses seeking to grow.

Economic Gardening is the idea that sustainable economic growth happens most effectively when done from within. Getting GE to move some of its Ecomagination operations to Michigan is great, but nurturing the next GE from a seedling entrepreneur, is even better.

Instead of focusing energy and resources on getting the big companies to stay, which at times can be a daunting task, Economic Gardening focuses on helping small companies grow, create jobs and generate innovation. This initiative will lay the foundation that allows the fledgling cleantech startups coming out of the Engineering and Business Schools in increasingly larger numbers to gain traction. This project only scratches the surface of what Shepherd Advisors, and many other organizations in the state, are doing in the green economy.

The hope is that full-scale strategic change will support sustainability at companies in the region, both at start up incubators and at established firms like Dow, Ford, DTE and others. VC money focused on supporting these initiatives will continue to pour into the state. Jobs will follow both at inherently green companies working in clean technology, alternative energy and related industries, as well as those with more traditional products and services who are making substantive changes toward sustainability. Michigan's knowledge base -- held both within skilled manufacturing and within the engineering, science, business and technology expertise emerging from state universities -- and its existing manufacturing infrastructure will be put to use in entirely new, more effective ways.

Here are my three key take-aways from having a first-hand look at the Michigan experiment:

1. Be both patient and impatient -- A green economy cannot develop in a matter of mere months. There's a large, complex web of relationships between consumers, government, academia, startups and large corporations that must be understood and managed in order for changes to stick. That said, it is never too early to ask the difficult questions and start changing direction on a large scale in order to take advantage of new market paradigms like the sustainable business movement.

2. Garden, don't hunt -- In the same way that renewable energy seeks move away from extracting energy to creating it sustainably, building an economy, or even just building a company, requires us to create new kinds of value sustainably, not bring them in from somewhere else. A business can only differentiate itself by innovating from within. Similarly, Michigan -- and other regions across the country -- can only differentiate and rebuild by nurturing these innovative new businesses that are on the leading edge of the market.

3. This really is where it all starts -- It's not an exaggeration to say that the seeds for green business growth that have been planted here will put Michigan on center stage and help shape sustainability policies across the U.S. and globally in the decades to come. The Michigan experiment presents the opportunity for a fundamental economic transformation, similar to what Silicon Valley and Boston experienced when state, federal, university and VC funding converged in previous decades, and provides an example for other regions looking to replace "business as usual" with business for the post-recession, green-oriented economy.

Companies cannot ignore sustainability, and the economic recession has begun to catalyze those organizations whose obsolete products (like gas-powered cars) are now on the chopping block. There are plenty of obstacles to overcome and change will not happen overnight, but we believe that the business case can be made for sustainability, and it is exciting to see these efforts begin to bear fruit in Michigan before blossoming across the country.

Sam is currently a student at the Erb Institute, a dual MBA/MS program between the Ross School of Business and the School of Natural Resources and Environment at the University of Michigan. 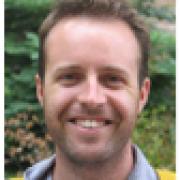 See all by Sam Lines