Is this the microgrid moment?

California's planned power shutdowns have communities, cities and companies scrambling for solutions, and microgrids are at the top of the list.

In mid-October, one week before more than 3,000 people descended on downtown Oakland, California, for GreenBiz Group’s VERGE 19 conference, an estimated 1 million people lost power in Northern California. On purpose.

It was part of Pacific Gas & Electric’s Public Safety Power Shutoff (PSPS) program, an initiative that shuts off portions of the region’s electricity grid to avoid wildfires when the risks are high; that is, when conditions are hot, dry and windy.

Given the national exposure these actions received, the GreenBiz team received a flurry of questions from VERGE 19 attendees and exhibitors: What would happen if the power went out during the event?

The answer: The show would have gone on. Why? Because for the past six years, the power to run big portions of the conference have come from an on-site microgrid.

The VERGE 19 mainstage was powered by a fully functional, renewably powered temporary microgrid built onsite in two days, using existing technologies available to any business or organization seeking to improve its resilience.

"Part of why we build it is we want to demonstrate that the technology exists today," said GreenBiz Group CEO Eric Faurot during the VERGE event. "In two days, we can pull together off-the-shelf, energy assets and have a fully functioning distributed, renewable and resilient energy system we need."

At its most simple level, a microgrid is made of three components: something that generates energy; something that stores the energy; and a controller to monitor and manage the flow and use of that energy.

At VERGE, those components were brought together by willing partners in a sort of clean energy stone soup: Ageto Renewable Controller managed the energy flow; Blue Planet Energy brought in its commercial energy storage system; All Power Labs provided additional power (in the form of gasified walnut shells), ensuring power if the sun wasn’t shining.

Speaking of which, the microgrid tapped into the Golden State Warriors’ solar array, next to the Oakland Convention Center at the Warriors’ former practice site. (The team just moved to its new facility at the start of this basketball season, the Chase Center in San Francisco.) 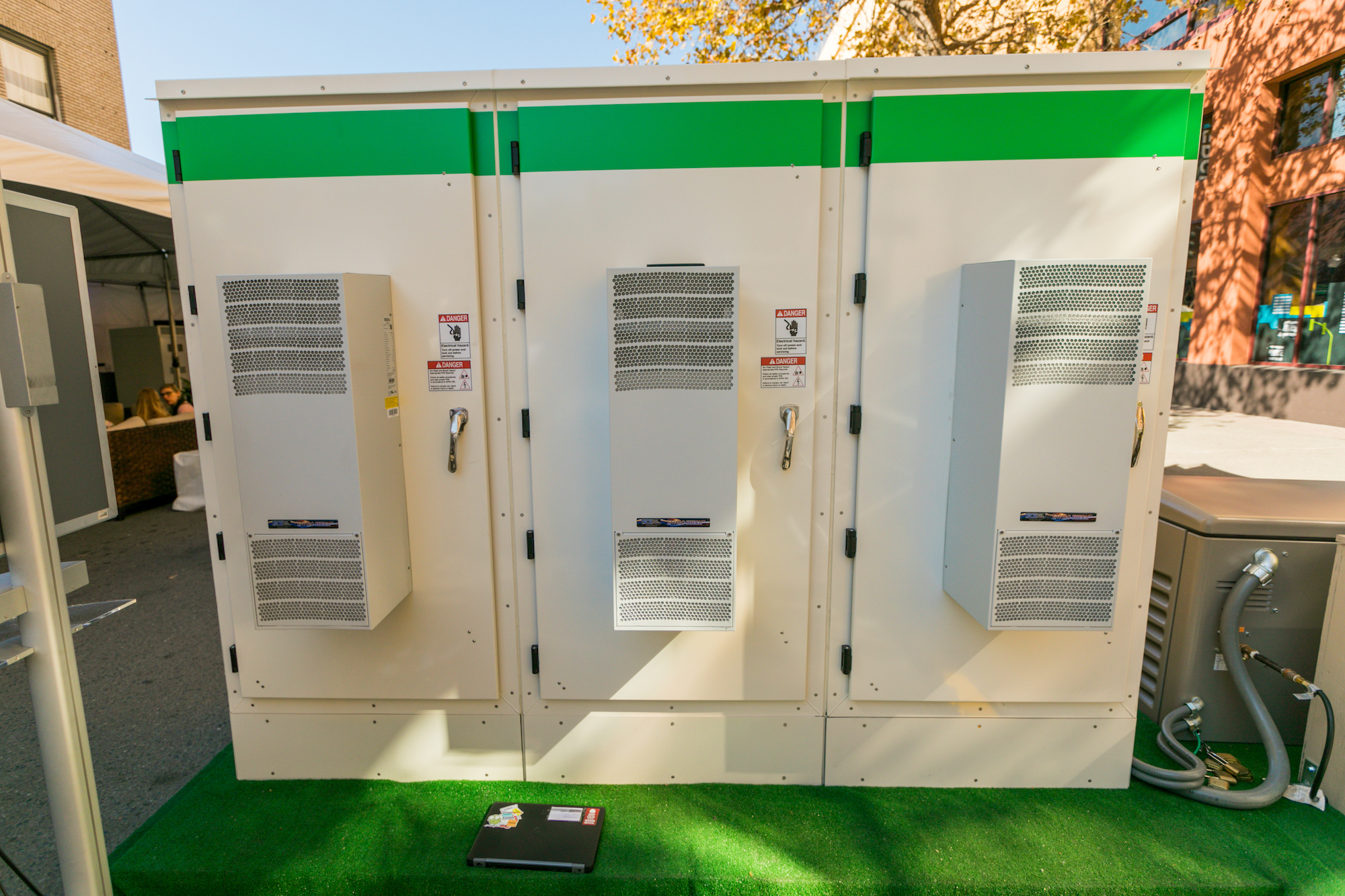 The role that microgrid technology can play during this time of massive energy industry disruption has never been clearer.

"Education has been a challenging barrier for microgrid adoption, but in a way, the [shutdowns] have created widespread awareness of the vulnerability of the grid," said Blue Planet Energy’s COO Chris Johnson via email. "Microgrids are a building block of a modern grid that is resilient, reliable and fossil-fuel free that is accessible today."

The value of microgrids

The technology to build microgrids — temporary and permanent — has existed for years. As with much of cleantech, the price of the components has fallen precipitously. The price tag on both batteries and solar, for example, have fallen by 85 percent since 2010.

Still, the price tag for a fully functioning microgrid can’t compete on a watt-to-watt basis with centralized energy generation (such as the power that could be commissioned from most power plants, no matter the energy source).

California’s recent power shutoff reminded the corporate world that there is value to being able to control energy beyond the price of a watt.

Consider that California’s planned power shut-offs cost the California economy upwards of $1.5 billion. Northern California small businesses, already running on thin margins, reported losing thousands of dollars a day, and the long-term impacts on the economy are yet to be seen. That’s a scenario few businesses are eager to repeat.

"These sustained PSPS events cannot be the new normal for California," California Public Utilities Commission President Marybel Batjer said in an interview with Utility Dive. "The frequency and scope of the PSPS events of 2019 impacted communities, and in a profound way."

While the key value proposition for a microgrid has been the ability to customize energy solutions, there is now a counter-movement to develop pre-configured systems that would be plug-and-play.

When factoring in business continuity, it’s possible companies large and small will begin to view microgrids more as an insurance policy; an additional cost to hedge an even larger cost.

What’s more, microgrids may not require an initial capital outlay. Innovations in financing are opening up the potential for more organizations and communities to capitalize on microgrids, similar to how financing for solar led to the uptick in adoption.

Schneider Electric, for example, offers an energy-as-a-service model for microgrids, where the off-taker of the asset does not own the asset itself and therefore avoids the upfront cost.

Obviously, Californian interest in distributed energy technologies such as microgrids that can keep businesses and homes powered up when the grid is down is at an all-time high.

But the shape of those solutions is still solidifying.

And while the technologies already exist for all types of microgrids, it still can take a lot of leg work to get one up and running, as technologies often need to be acquired individually and require bespoke assembly.

The biggest implementation barrier is project developers still have to piece together and integrate the solutions.

"The biggest implementation barrier is project developers still have to piece together and integrate the solutions. Currently, project developers need to purchase batteries, an inverter, PV, and the controller all separately and make them all work together on-site," said Ageto Energy COO Mike Murray. "Every site is different... No project is cookie-cutter, which still drives a bunch of the project cost."

PG&E is considering a stopgap measure it dubs resilience zones, temporary power back-up systems that can be deployed when communities have the power shut off. The utility has two pilot versions deployed already, with the intent to deploy 40 more in the next three years. However, those solutions won’t cover all of the communities dependent on the overwhelmed utility.

"This approach has been pioneered in remote developing world economies and will drive energy access projects," Asmus said in an email. "While the key value proposition for a microgrid has been the ability to customize energy solutions, there is now a counter-movement to develop pre-configured systems that would be plug-and-play and be standardized, which would translate into smaller projects but larger portfolios, perhaps making microgrids more attractive for investors."

What it will take to electrify construction equipment

Rules for a net-zero energy strategy

A vote for clean energy is a vote for the economy

Bill Gates is doing his part for the climate. Now it’s time for corporations to do theirs.

What happens when climate policy collides with real-world constraints?