Microsoft is building a ‘Planetary Computer’ to protect biodiversity

It’s all about collecting and connecting data, which is part of the software giant’s DNA.

"The species of the world are connected with each other. I think that’s actually one of the lessons, the real reminders, if you will, of the year 2020, as we all live every day with the issues obviously created by COVID-19," observed Microsoft President Brad Smith, during a video launch Wednesday for the company’s latest sustainability push — an ambitious initiative to support global biodiversity.

Smith’s remarks, of course, refer to the links tracing the novel coronavirus back to animal origins, a phenomenon that has become far more common as humankind encroaches on forests, wetlands and other habitats.

During the modern era, Smith noted, wetlands that purify and store water for thousands of species have been reduced by 87 percent while coral reefs have declined by 50 percent — data points explored in the United Nations’ first global assessment (PDF) of ecosystems and biodiversity published in 2019. An estimated one-quarter of species are threatened with extinction, which could amplify the collapse of other habitats.

That backdrop makes Microsoft’s new commitment — a master to plan to create a "Planetary Computer" for assessing, monitoring and managing natural ecosystems data — more timely. The initiative builds on Microsoft’s 2.5-year-old AI for Earth program, which has supported grants for more than 500 environmental data projects in 81 countries. Google and Amazon have invested in cloud resources and artificial intelligence platforms working toward similar missions, but not on the grand scale that Microsoft seeks to achieve.

The species of the world are connected with each other. I think that’s actually one of the lessons, the real reminders, if you will, of 2020.

In a unique gesture (at least for the tech industry), Microsoft has also committed to protecting more land than it uses by 2025; its operations footprint is about 11,000 acres of land globally, an area about three-quarters of the size of Manhattan. Its partners in that effort are the Nature Conservancy and the National Fish and Wildlife Foundation.

"We depend on clean air, water, food, medicine, energy and building materials that nature provides, but these very ecosystems are threatened or already in decline," Smith wrote in a blog with more details about Microsoft’s biodiversity mission. "Maintaining nature for the benefit of current and future generations is one of humanity’s greatest challenges. Deploying technology to support this global effort is one of ours."

To that end, Microsoft plans to create a cloud-based computing platform that will provide access to "trillions of data points" — ranging from satellite images to surveys on land and in the oceans to geospatial information. This resource — part of Azure open data — will be publicly available to scientists, conservation organizations and other businesses for use in hypothetical scenarios for species mapping, land cover mapping and land use optimization such as:

Lucas Joppa, chief environmental officer at Microsoft, said not enough of this data exists and what has been collected isn’t readily available to those who might benefit. Microsoft’s aim is to make it more accessible — and to help generate more of it. One of the first new collaborations to build on this database is with the Group on Earth Observations Biodiversity Observation Network; $1 million in grants have been specifically allocated for projects providing biodiversity measurements. 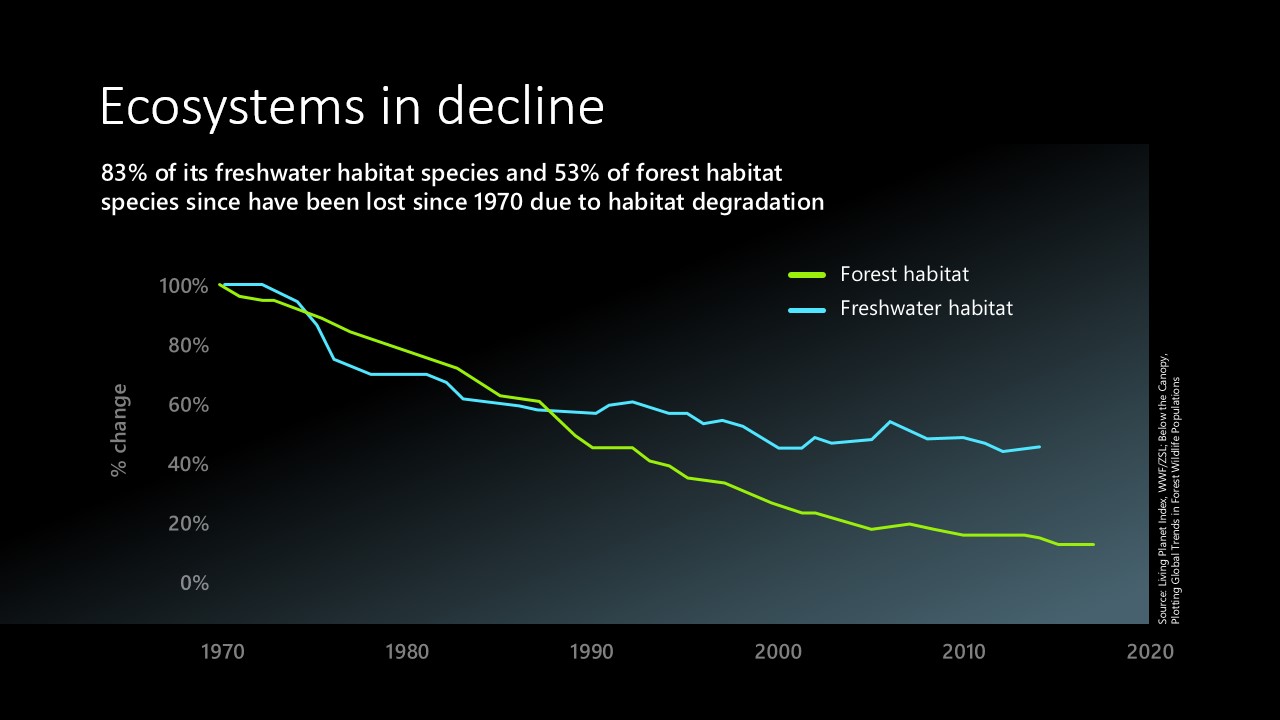 "We haven’t closed the most important gap of all, helping organizations build on the work of each other," Joppa said, during the virtual briefing. "We need to help the world achieve a new level of planetary insights for decision making."

With that in mind, the Planetary Computer will provide sophisticated analytics tools powered by Microsoft’s artificial intelligence technologies as well as the geospatial expertise of its long-time partner, Esri, which specializes in geographic information system software that helps provide valuable insights about the changing climate.

"These are action maps," said Dawn Wright, chief scientist at Esri, during the Microsoft webcast. Location is only the first dimension; these are maps that organizations can use to decide what to invest in, where society should build, what should be protected, what to do in terms of tradeoffs between business or infrastructure needs and species habitat, she said. Her message: "Spatial is special." The secret sauce is the ability to show change — or projected change — over time.

One specific project talked up by Wright during the announcement was the Map of Biodiversity Importance created by NatureServe, which shows at-risk species across the entire United States. "We can see the locations that matter the most for biodiversity," she observed, noting that 90 percent of Americans live within 30 miles of an area of high biodiversity importance.

And using maps such as the one created by NatureServe, the public and private sector can consider the concept of "geodesign" — where nature is a stakeholder — in future projects.

As Microsoft promised earlier this year when it launched its "carbon negative" strategy, Smith said the company intends to use "its voice" to advocate for public policy and more attention to biodiversity on a global basis.

It’s calling on governments to undertake national ecosystems assessments and began to monitor the evolution of those ecosystems on an ongoing basis — something few countries have committed to do.

"We do, today, confront a planetary problem," Smith said on the webcast. "It’s obviously the problem of the moment, when we think about COVID-19. That’s a planetary problem. But when we think about the decade ahead, I think we can all probably agree that in the year 2030, we’re going to be spending a lot more time talking about and addressing the sustainability needs of the world than COVID-19, as critical as that is for the moment. We have to do more to protect the planet."

When organizations and communities link arms, when they work together across artificial planetary boundaries, problems can be solved more quickly, he said.