Microsoft doubles carbon fee as it doubles down on ambition

For the past seven years, Microsoft has held business units accountable for their carbon footprints by charging an internal fee on emissions that it has used to fund climate change mitigation efforts — anything from offsets to energy efficiency projects to renewables investments.

On Tuesday, the cloud computing giant revealed plans to boost that fee to $15 per metric ton — almost double the previous rate. It also joined the Climate Leadership Council, one of several organizations advocating actively for policies that would create a national price on carbon.

Both moves are part of a newly declared strategic shift that places a sharper focus on the potential for Microsoft not just to make its own operations more sustainable — reducing the climate-related risks to its businesses — but to play a deeper role in boosting its customers’ own sustainability agendas, and Microsoft's revenue.

In other words, the tech giant views sustainability as a driver of revenue growth.

"The funds from this higher fee will both maintain Microsoft’s carbon neutrality and help us take a tech-first approach that will put sustainability at the core of every part of our business and technology to work for sustainable outcomes," wrote the company’s president, Brad Smith, in a blog about the pivot. "In practice, this means we’ll continue to keep our house in order and improve it, while increasingly addressing sustainability challenges around the globe by engaging our strongest assets as a company — our employees and our technologies."

The funds from this higher fee will both maintain Microsoft’s carbon neutrality and help us take a tech-first approach that will put sustainability at the core of every part of our business.

Two of the company’s most mission-critical initiatives — cloud computing and artificial intelligence services — are at the center of the shift.

"Data can help tell us about the health of our planet, including the conditions of our air, water, land and the well-being of our wildlife," Smith wrote. "But we need technology’s help to capture this vast amount of data and convert it into actionable intelligence."

Cloud-based data centers are central to powering the computations behind that intelligence, and the energy they consume is a matter for heightened scrutiny.

Microsoft already has made substantial strides toward its commitment to 100 percent renewable energy for its cloud data centers. It should reach 60 percent by the end of 2019, the company revealed Tuesday, thanks in part to ongoing efficiency measures and its sophisticated strategy for investing in renewable energy through power purchase agreements. And it is striving to hit the 70 percent mark by 2023.

This week, the company launched a related initiative that will see it use artificial intelligence, blockchain technology and the internet of things to become more prescriptive about how the power — and the computer servers themselves — are managed. Google likewise uses AI heavily as part of its energy management portfolio.

It isn’t just the energy consumption that will be monitored more closely. Microsoft will use the data gathered and analyzed by those technologies to determine how equipment should be reused or recycled over time.

"Microsoft has reached a scale in our computing infrastructure where it makes sense for us to have clearer ownership structure over different parts of the circle," Microsoft Chief Environmental Officer Lucas Joppa told me when we chatted about the company’s evolving approach.

Doubling down on AI for Earth

The sketch for that master plan, outlined in an analysis produced by Microsoft in collaboration with the U.K. arm of consulting firm PricewaterhouseCoopers (PwC), builds on the company’s $50 million AI for Earth initiative and issues grants to help scientists, startups and academics leverage AI toward researching and better understanding climate change.

One example of a startup funded by that program is Silvia Terra, which is using AI and biometrics to create high-resolution maps of forests down to the tree level. This sort of information could make it far simpler for small landowners to become part of carbon offset marketplaces, Joppa said. "When everybody plays, we all win," he said. 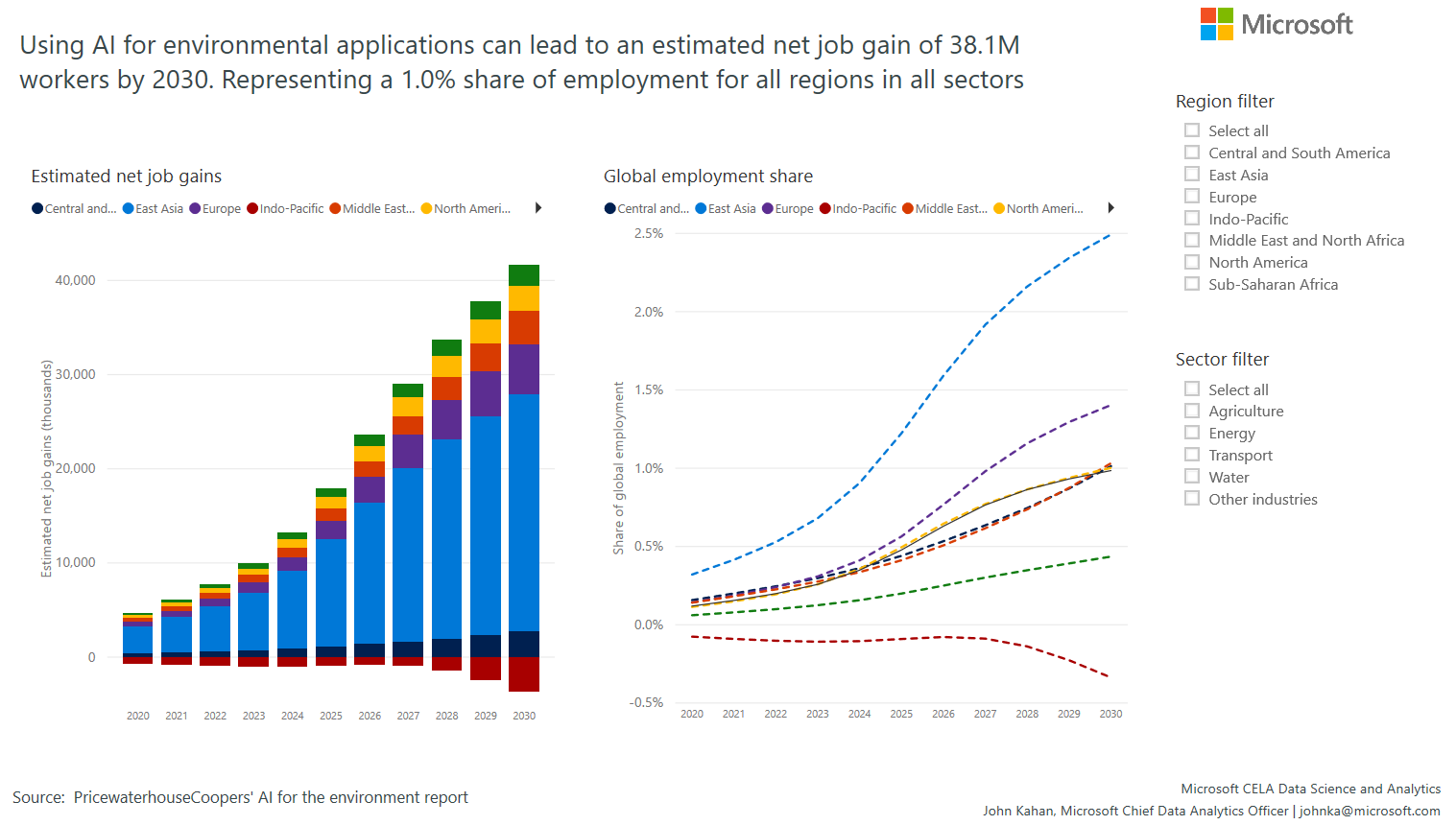 According to the projections developed by PwC and Microsoft, applying AI to transportation, water, energy and agriculture issues could boost gross domestic product by 3.4 percent to 4.4 percent globally, while reducing greenhouse gas emissions by up to 4 percent by 2030.

For perspective, the size of the reduction could be about 2.4 gigatons, equivalent to the combined national carbon footprints of Australia, Canada and Japan. The "economic benefits" in Europe, East Asia and North America could be up to $1 trillion each, in the best-case scenario considered in the Microsoft-PwC analysis.

Water management and services company Ecolab, for example, uses real-time sensors to gather information about water-intensive processes in facilities. That data is then aggregated and analyzed in the Microsoft cloud to help Ecolab’s customers make better decisions. That capability is integral to the company’s long-term revenue growth, and it helps inform the Water Risk Monetizer service offered by Ecolab and Trucost.

The Yield is another illustration of an organization that is creating an entirely new business out of applying AI and analytics toward climate-related challenges. The Australian startup has created a service that helps farmers make better decisions about water and resource consumption, while simultaneously surfacing suggestions about how to improve crop yields.

More details about specific Microsoft products created with sustainability in mind will emerge in the coming months, according to Joppa and Smith. "This tension between environmental sustainability and economic growth is a false dichotomy," Joppa said.

This tension between environmental sustainability and economic growth is a false dichotomy.

Two of Microsoft’s most formidable rivals — Amazon and Google — also have plenty to say about applying AI, cloud services, sensors and other technologies toward sustainability challenges. But neither has linked its sustainability agenda to revenue growth in quite the way that Microsoft intends to do.

People have begun to notice. Just ask Amazon, which is under pressure — from thousands of its own employees — to take a leadership position on addressing climate change. Last week, 6,342 of them signed a letter urging the company to adopt a shareholder resolution proposed last fall that would require Amazon to adopt a more aggressive, specific action plan.

The employees are calling for six specific actions:

Microsoft’s own transition is sure to be rocky. For one thing, there has been a backlash of concern over the ethics of where and how to use AI, and there's substantial angst over its potential to automate certain jobs — such as manual data analysis — out of existence.

It’s only fair to note that, like Amazon, it has plenty of customers in the oil and gas industry. Indeed, just last month, it signed a strategic partnership with another software company, Maana, that is invested heavily in the same sector. Maana’s energy customers control roughly one-quarter of the world’s oil and gas production.

When I asked Joppa about the company’s long-term intentions when it comes to supporting industries focused mainly on fossil fuels, he acknowledged that the switch won’t happen overnight. "Any clear-eyed person recognizes that this happens over time," he said. "We will be relying on fossil fuels for some time."