A recent study by G&A Institute suggests that 81 percent of all S&P 500 companies are publishing sustainability reports. To get to this point has taken roughly 20 years, mostly promoted by the community that evolved around the Global Reporting Initiative (GRI), founded in 1997.

Early on in this process, the big-name brands recognized their progress would be limited without involving their suppliers. Pioneers such as Patagonia began their supply chain program as far back as the early 1990s. HP's social and environmental responsibility program launched in 2000. The likes of Walmart, Philips, Tesco, GE and Marks and Spencer’s began in the early 2000s, with the hard-to-ignore rise in the price of energy. Others, such as Duke Energy, began as recently as 2012. 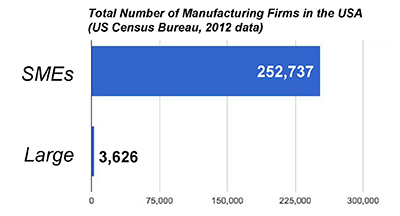 Meanwhile, on the receiving end, suppliers are experiencing a torrent of requests for disclosure, all somewhat similar, but nonetheless different. These unsung heroes of supply chains, mostly mid-tier manufacturers with names often unrecognized by the general public, are the backbone of most name brands in this era of globalization. They are undoubtedly a significant part of a product’s sustainability footprint, as they encompass much of its material and energy demands, its transportation impact as well as its labor. Thus, for brand names to achieve sustainability they must also make their suppliers part of the solution. 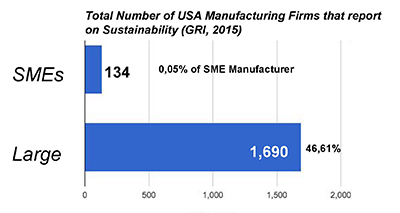 But leaps in sustainability disclosures that go deep into the major supply chains have been far fewer than one might hope considering the rapid rise of this practice among the Fortune 500. In actual numbers, disclosure among the mid-tier manufacturers to stakeholders that are not their strategic clients has been limited. For example, a recent review of GRIs list of 2015 reporters reveals that only 0.5 percent of small and medium-size manufacturers in the United States publish annual sustainability reports — a stark contrast to the almost 50 percent of large-scale manufacturers that are currently reporting. 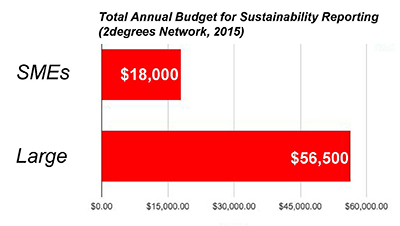 To understand why this is so, we must first describe the pressures mid-tier manufacturers face on a daily basis. For one, they have far less resources on hand compared to Fortune 500 brand names: They live in a world of limited profit margins and harsh competition, allowing them to invest only in "what’s needed." A 2015 review by 2degrees suggests the average budget for SME manufacturers is $18,000, while large manufacturers allocate a sum two to four times higher.

Heads above the water

Such cost constraints leave no room for big-ticket projects — no large strategic sustainability reviews, no broad market studies or product development efforts and certainly no major data-management endeavors that would allow sustainability programs to take a long view. Thus, programs are constrained to simply meeting the regulatory requirements by mostly local and national authorities and any "random" requests by their strategic clients.

Over time, many mid-tier manufacturers therefore have become complacent with tactical approaches, hiring and appealing to staff with engineering or operational background that’s finding it harder and harder to keep their heads above water on the more strategic sustainability needs. The "big picture" performance metrics coming in with brand-name questionnaires are all too often met with cynicism, panic or indifference.

Technical staff do not have the time, resources or day-to-day mindset to deliver "big picture" pivots when most of its tasks require short-term resourcefulness. They need to keep production of the next batch delivered on time and safely, and the 10-year plan falls by the wayside, lacking context that’s relevant to the company’s competitiveness. Questionnaires and audits become yet another compliance challenge, rather than a strategic call for action.

Mid-tier manufacturers' executives find it hard to justify costly external help, other than for the most pressing compliance-related requirements.

Mid-tier manufacturers' executives face a similar problem: They find it hard to justify costly external help, other than for the most pressing compliance-related requirements. They want to keep current strategic customers content, but with the barrage of different disclosure requests find it hard to point towards a clear set of sustainability goals, well suited for their specific conditions. Thus, they conform to rolling with the punches, hoping that at some point consolidation of methodologies and practices will give them the necessary relief.

But, at least for a while, the opposite is happening. I recently visited with one such mid-tier executive, who in his frustration told me what he needs most is a "smart waste bin" — a repository where he throws all the lab reports and raw data coming at him, as well as all the reporting protocols, audits and disclosure requests.

"And out of this mix," he told me, "I would like to get a clean table with each customer and regulator getting their own tailored report, neatly stacked on my table for review. I would also like this smart bin to add one extra report — one that informs me where I am compared to my competition, not in terms of policy, certificates and disclosures, but in terms of action — real performance benchmarking. If I know how others are pushing the envelope, I’ll find my ways to push the envelope as well."

But a fantasy "smart bin" does not need to remain a daydream. Information technology has been known to perform just that type of magic at a fraction of the cost of labor-intensive solutions. Crunching and organizing numbers efficiently is exactly why financial accounting systems have become popular and an essential part of current-day corporate life.

And as software eases the data collection necessary for tracking sustainability metrics, the timeliness and quality of data also will improve, enabling decision makers to use these metrics with greater confidence. Cloud computing, "big data" and state-of-the-art user interfaces have come together to disrupt multiple business activities from straightforward customer relations management and dynamic pricing to lean manufacturing and smart logistics. It’s now time for software to eat corporate sustainability too.

Unfortunately, many in the sustainability arena still view information technology as a mere technical contribution.

Unfortunately, many in the sustainability arena still view information technology as a mere technical contribution. But a study of recent history suggests software soon will release the shackles on sustainability innovation and competitiveness, allowing mid-tier players that are currently prevented from entering the game because of the high entry costs to disrupt the market.

When looking at other aspects of corporate activity the picture is clear: Sophisticated information technology may be our primary hope to truly engage the mid-tier manufacturers, SMEs and various other companies currently excluded from the sustainability front lines due to their limited capacity. Without technological disruption sustainability disclosure will remain an activity for the behemoths and a burden for everyone else.

Editor's note: This article has been changed to reflect HP's program in social and environmental responsibility launched in 2000, not in 2012 as originally stated. 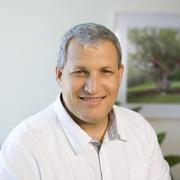 Herd of elephants in the room at COP22 in Marrakech

See all by Noam Gressel

VERGE 21 features sessions specifically for startups and investors, including interactive breakouts and industry expert conversations. We are offering a 40% discount to startups. Please contact [email protected] for your 40% discount code.