The most destructive and costliest wildfire in California’s history, the Camp Fire, killed 85 people and destroyed nearly 19,000 structures in November 2018. A year later, crews were still collecting and carrying away piles of wood, metals, appliances, contaminated soil, toxic household chemicals and other debris and waste totaling more than 3.2 million metric tons (PDF) — roughly the weight of 2 million cars.

Hurricane Michael, which hit Florida in October 2018, left about 13 million cubic meters of debris. To visualize what that looks like, picture a pile of 13 million boxes, each the size of a washer and dryer. More than a year later, crews were still removing the waste.

Dealing with enormous quantities of debris and waste materials is one of the most significant challenges for communities in the wake of natural disasters. Often this task overwhelms local waste managers, leaving waste untouched for weeks, months or even years.

As researchers who study urban engineering, disaster management and planning and waste management, we see this as a critical and under-studied problem. Disasters will continue to happen and the losses they cause will continue to grow as a result of climate change, population growth, urbanization, deforestation and aging infrastructures. Societies urgently need better strategies for dealing with the wastes these events leave behind. 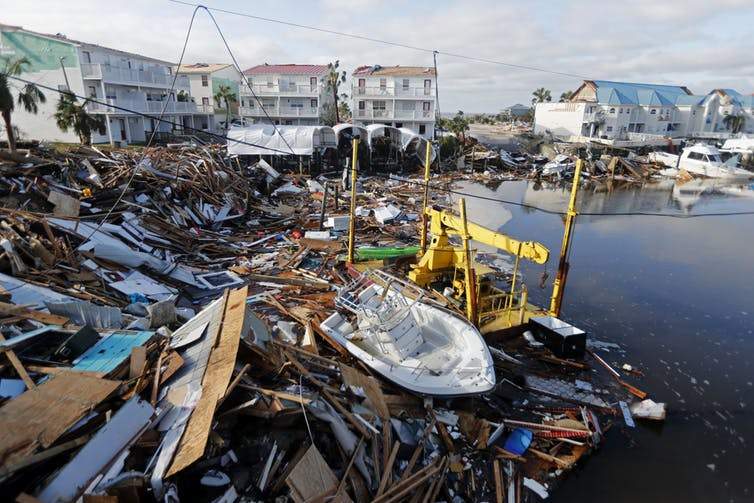 AP Photo/Gerald Herbert
Debris pushes against the shore of Mexico Beach, Florida, Oct. 11, 2018, after a direct hit from Hurricane Michael.

Climate-related disasters such as floods, landslides, storms, wildfires and extreme hot and cold waves afflict millions of people around the world. These events have been increasing over time, particularly over the past several decades, and so have the losses they cause.

Disasters commonly produce thousands to millions of tons of debris in a single event. For example, waste from hurricanes includes vegetation, such as trees and shrubs; municipal solid waste, such as household garbage; construction and demolition materials; vehicles; and household hazardous materials, including paints, cleaning agents, pesticides and pool chemicals.

Debris from wildfires largely consists of ash, contaminated soils, metal and concrete, along with other structural debris and household hazardous items such as paints, cleaners, solvents, oils, batteries, herbicides and pesticides.

Dangerous and in the way

Debris collection and cleanup following a disaster is a slow, expensive and dangerous process. First, crews clear out debris from roads used for rescue efforts. They then move the material to temporary storage areas. No one has yet invented a way to easily sort or contain hazardous materials, so they remain mixed into the debris mass. This poses major challenges for reusing and recycling post-disaster waste.

Beyond direct health and safety risks, debris also threatens the environment. It can emit air pollutants and contaminate groundwater, surface waters and soil. Uncollected debris and waste can hamper rescue and recovery efforts and slow down rebuilding efforts.

Uncollected debris and waste can hamper rescue and recovery efforts and slow down rebuilding efforts.

As an example, when Hurricane Katrina flooded New Orleans in 2005, it left behind an estimated 75 million cubic meters of waste that interfered with and slowed down recovery efforts. The debris included close to 900,000 white goods, such as refrigerators, 350,000 cars and more than 16,000 metric tons of rotten meat. Cleanup costs were estimated at roughly $4 billion.

Residents of Liberty City, Florida complain about dirt and odors from debris processing after Hurricane Irma in 2017.

At an expert workshop (PDF) that we organized in May, we identified steps for sustainably managing disaster debris and waste. As we see it, the key tasks are: to identify what is contained in these wastes; find better approaches to recycling and reuse; design new technologies to identify hazardous components and sort the different types of waste; and develop markets to promote reuse and recycling.

Today public officials and planners know little about the amount and types of materials generated during disasters — what they contain, in what proportions, whether they are large and sortable versus fine and mixed, and how much can be reused or recycled. Developing new technologies and management approaches that can assist debris characterization, reuse and recycling should be a top priority. 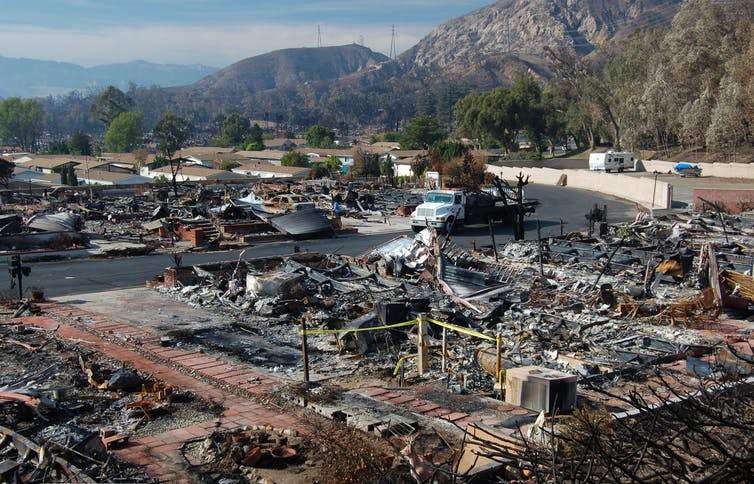 FEMA/Wikipedia
The remains of a mobile home park in Sylmar, California after 480 of the park’s 600 mobile homes were burned in the November 2008 Sayre Fire.

For example, drones and autonomous sensing technologies can be combined with artificial intelligence to estimate amounts and quality of debris, the types of materials it contains and how it can be repurposed rapidly. Technologies that allow for fast sorting and separation of mixed materials also can speed up debris management operations.

Turning the problem around, creating new sustainable construction materials — especially in disaster-prone areas — will make it easier to repurpose debris after disasters.

Finally, new business models can help generate demand for and access to waste and recycled products. With proper sorting, some disaster materials can be used to make new products or materials. For example, downed whole trees can become timber resources for furniture makers. Today, opportunities to match materials with markets are wasted — pun intended.

University of Illinois at Chicago

The risk of 'cascading' natural disasters is on the rise

Should Port-au-Prince be Recycled?