About $272.8 billion is spent annually on energy efficiency (EE) investments — but tapping the full potential of EE will require at least four times as much investment. This finance gap is slowing down the energy transition we need.

As it is, global energy intensity — a measure of the energy efficiency of a nation's economy, calculated as units of energy per unit of GDP — was 1.8 percent in 2015, three times greater than the 2003 to 2013 average, but still falling short of the required 2.6 percent to avoid the 2 degrees rise in global temperatures scenario, or the necessary increase of 3 percent in the efficiency of our energy usage.

Although recent months have seen some steps in the right direction, whether through the launch of the Energy Efficiency Finance Task Group (EEFTG) at the G20 in Hamburg, or the recent signing of the Taskforce for Climate Related Financial Disclosure (TCFD) by 103 chief executives (which calls for the development of consistent climate-related financial risk disclosure and reporting), not enough is being done to redeem this gap.

This is the era of cheap and plentiful finance, so why is there still a finance gap for energy efficiency?

The inadequate accounting of externalities and barriers partly explains the tenacity of this gap. Subsidies for renewables and fossil fuels, as well as the absence of a carbon price that could account for environmental externalities, insulate consumers from full energy prices. These structural conditions prevent consumers from making informed decisions. On the other hand, the intangible and comparatively small nature of EE assets and projects discourages traditional bankers and investors from dipping a toe into this area. The elusiveness of EE benefits is a significant drawback to potential investors. Contrary to other investments, energy efficiency cannot be directly measured in terms of incremental physical production. Rather, it is measured as a saving or reduction against a baseline of consumption or expense. The result is perceived complexity, which manifests itself in requirements for monitoring and verification to confirm the savings and higher transaction costs.

These technical realities underlying EE investments result in investors demanding an implicitly higher rate of return to offset the perceived higher risk of EE projects. These factors often have a reinforcing effect; the risks, both real and perceived, associated with EE projects explain the remaining EE financing gap.

Over two-thirds of our efficiency potential is still untouched. In addition to putting the brakes on the curbing of our carbon emissions, this dormant potential means significant employment and economic markets are being overlooked. In the construction sector, for instance, 80 percent of EE potential remains; public building renovation in the EU alone represents a $141.77 billion market over the 2017 to 2020 period. In France, the estimated market is around $35.44 billion over the next 10 years, and could create up to 1 million jobs by 2025.

We need financial innovation and creativity to unlock EE investments and to grasp these employment and growth opportunities. Could blockchain be the answer?

Blockchain is a distributed, digital transaction technology that permits the secure execution of smart contracts over peer-to-peer networks independently from a central authority such as banks, trading platforms or energy companies and utilities. Other participants in the network act as witnesses to each transaction carried out between a provider and a customer; these are stored permanently on a digital ledger — the blockchain — which is duplicated by every computer on the network.

In the transition to a new energy world — decentralized, digitized and decarbonized — several use case applications already have been developed using blockchain technology, such as automated bill payments, electrical vehicles charging and sharing and renewable cryptocurrencies.

Moving beyond bitcoin — the cryptocurrency most people associate with blockchain — the technology serves as a smart transaction platform at a systematic level that gives rise to true "prosumers": as well as consumers, households also become producers and sellers of energy with a high degree of autonomy. Utilities and grid operators become more efficient by being able to balance supply and demand in real-time by engaging these prosumers directly. It supports renewable energy integration into the grid in a cost-effective fashion. 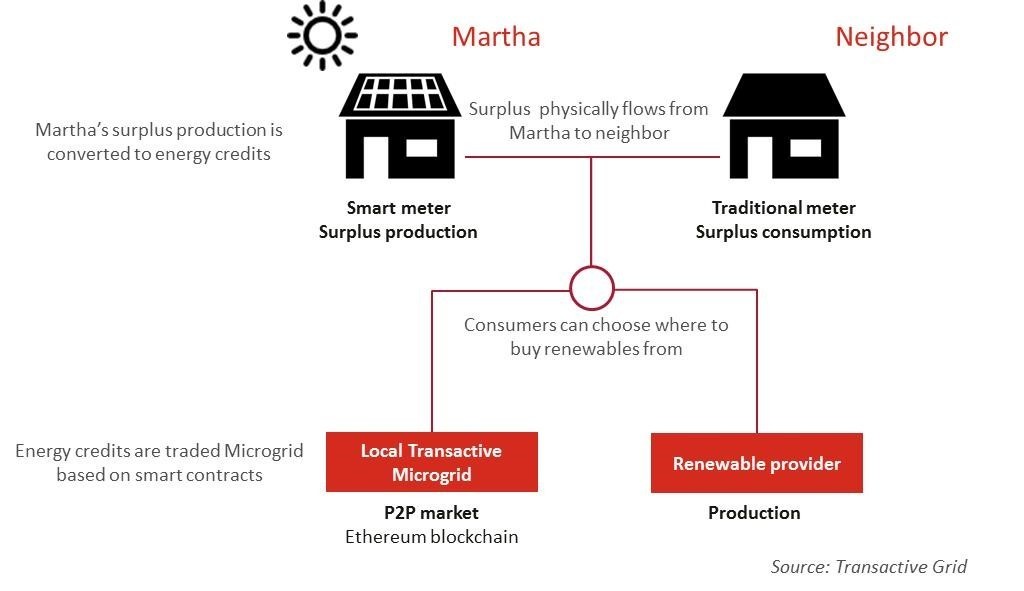 In New York, a small energy company together with a technology company have developed a microgrid project in which neighbors can buy and sell solar power from each other on a blockchain platform called TransActive Grid that documents all transactions. This independent and isolated network solution offers both cleaner and more resilient energy access to its users through its embedded battery storage units. This project has led to the emergence of true prosumers. To date, more than 130 homeowners with or without solar photovoltaic (PV) systems already are buying and selling power from each other through this platform.

In May, several companies joined forces to manage electricity grids in the Netherlands and Germany. The renewable energy company Vandebron will work with customers who own an electric vehicle to make electricity from their car batteries available to the grid in order to help the Dutch national grid operator TenneT better integrate increasing amounts of renewable energy. TenneT is using innovative IBM blockchain technology to manage this electricity grid.

In the future, blockchain technology could allow millions of energy devices such as water heaters, electric vehicles, batteries and solar PV installations to transact with each other at the electric power distribution edge.

The evidence suggests that targeting the risk perception of investors through a variety of instruments is successful in scaling up EE investments. The blockchain peer-to-peer model, built on the trust engendered by its permanent and unfalsifiable digital ledger, is a creative financial tool that can help overcome this perception of risky EE transactions.

In the pilot cases implemented to date, more than half of which have been in Europe, blockchain has proven to be a huge cost-saver and efficiency-enabler. By letting go of intermediaries, blockchain transactions lower costs, speed up processes and result in greater flexibility throughout the entire system. It leads the way to a systemically more efficient, flexible and decentralized energy system. The United Nations Climate Change (UNFCCC) recently recognized the potential of blockchain to boost climate action. Its transparency, cost-effectiveness and efficiency advantages can lead to more effective stakeholder integration to take concerted actions.

Over two-thirds of our efficiency potential is still untouched.

The technology is not yet mature, but is growing fast. It might take five to 10 years before the technology reaches mainstream adoption. Yet it paves the way to an acceleration of energy system decentralization and the emergence of prosumers, where individuals can adapt their behaviors according to real-time data, and a consequential increase in the overall energy system efficiency.

The total value of assets being administered via blockchain over the world is already over $1.6 billion, and grew by a staggering 1,600 percent between 2013 and 2016. Over $1.4 billion was invested in blockchain-related startups in the first nine months of 2016 alone.

The road is still long and the stakes are high

Actions that we take in the coming five to 10 years will lock us in for the next 50. The costs of inaction are rising yearly, with associated economic and humanitarian consequences. Natural disasters already cost over $500 billion a year worldwide and push an additional 26 million people into poverty every year. There are 65 million refugees in the world today, 20 million of whom exist thanks to climate change.

Energy efficiency can account for half of the solution to limit the rise in global temperatures to 2 degrees. Although cost-effective, however, its wider application is still hindered by obstacles. Through its transparency, peer-to-peer dimension, trust basis and growing potential, blockchain can smoothen and accelerate EE investments.

Governments should encourage its rise. At the G20 this year, President Emmanuel Macron announced a summit this month dedicated to climate finance. It is a great opportunity for France, Europe and the world, to further analyze and promote blockchain’s potential in accelerating climate actions. 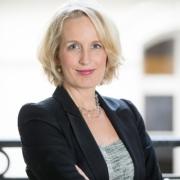 See all by Philippine de T'Serclaes