In early November, India prime minister Narendra Modi surprised his country by banning some of its most widely circulated physical currency — a big shock, considering data from consulting firm McKinsey suggests almost 90 percent of transactions completed there are still conducted in cash, especially in the most rural regions.

Modi justified his action as a move to eliminate black market currency, but it could have far broader economic impacts for the world’s fastest-growing economy. For one thing, the measure could trigger more rapid adoption of digital payment technologies and services. If that happens, one big benefactor could be multinational financial services company Mastercard.

That’s by design. One year ago, the company, which has made financial "inclusiveness" a key pillar of its long-term growth strategy, made a very public commitment to all 17 of the United Nations Sustainable Development Goals. So far, it’s making "very real progress" with the programs it developed to support five of those goals explicitly, said Louise Holden, head of public-private partnerships for the organization’s European division.

We are really accelerating a change, and that change is all about doing well by doing good.

You’ll notice that Holden’s title doesn’t include the words "sustainability" or "social responsibility." For Mastercard, both principles are deeply embedded into the company’s growth strategies.

"We sit within the business, which is a fundamental advantage and a recognition that what we do is ultimately commercially sustainable," Holden told GreenBiz. "Therefore, commercially, we have to wash our faces, which for me and for us means that we can sustain investments, we can sustain our involvement in what we do. It’s not CSR, it’s not philanthropic. What we do is commercially, we grow our markets for the future. Commercially, we strike up partnerships and we support organizations and we work with governments … to help them do what they need to do in markets around the world."

The situation in India plays into Mastercard’s master plan for SDG No. 17 (aka "Partnerships for the goals"). The company’s payments network already sits behind about 2.1 billion cards in more than 210 countries, but there is plenty of upside, considering that almost 85 percent of all transactions worldwide are still handled by check or cash, according to Mastercard data.

Holden credits Mastercard’s "enlightened" CEO Ajaypal Singh Banga, who joined the company six years ago, with driving his company to rally around the SDGs as a framework for sustainable growth. "We were already in a period of transition, where we were recognizing that what we had, what we saw, the way we connected organizations and individuals could really open up more opportunities," Holden said. "We are really accelerating a change, and that change is all about doing well by doing good."

With that in mind, here are the other SDGs that have Mastercard’s particular attention:

Based on GreenBiz’s conversation with Holden, Mastercard’s efforts over the past year have been demonstrable in several areas. Here’s a brief update about two of them.

Part of the company’s work to address poverty and gender equality involves two specific programs: an initiative by governments in Nigeria, Egypt and other emerging economies to link government identity cards more closely to payments. In South Africa, for example, Mastercard is working on an effort to digitize welfare programs. This helps address both fraud and "leakage," according to Holden. It has also worked closely with the Rwanda government.

Mastercard's overall goal is to add about 500 million people and merchants to "the financial system" by 2020, and it’s well on the way: since stating that goal, it has helped include more than 240 million "previously excluded" individuals, especially in sub-Saharan Africa, Holden said.

Some examples of the initiatives that are helping include efforts by the Mastercard Labs for Financial Inclusion in Nairobi to bring small-holder farmers into the digital services being used to power the country's agricultural supply chain. In Nigeria and Egypt, Mastercard's identity management services are helping deliver payments to citizens while reducing fraudulent payouts.

Don’t discount the impact of this effort within established economies, including America and parts of Europe. "Across the globe, even the markets we think we think are the most inclusive are still locking some people out, either by choice or by lack of choice," she said.

Although many programs point to this broad mission, a particular focus is getting more women and girls involved through a two-year-old education program called Girls4Tech, which trains participants for careers in science, mathematics or technology fields. As of April, Mastercard had reached more than 3,000 people with this mentorship effort. 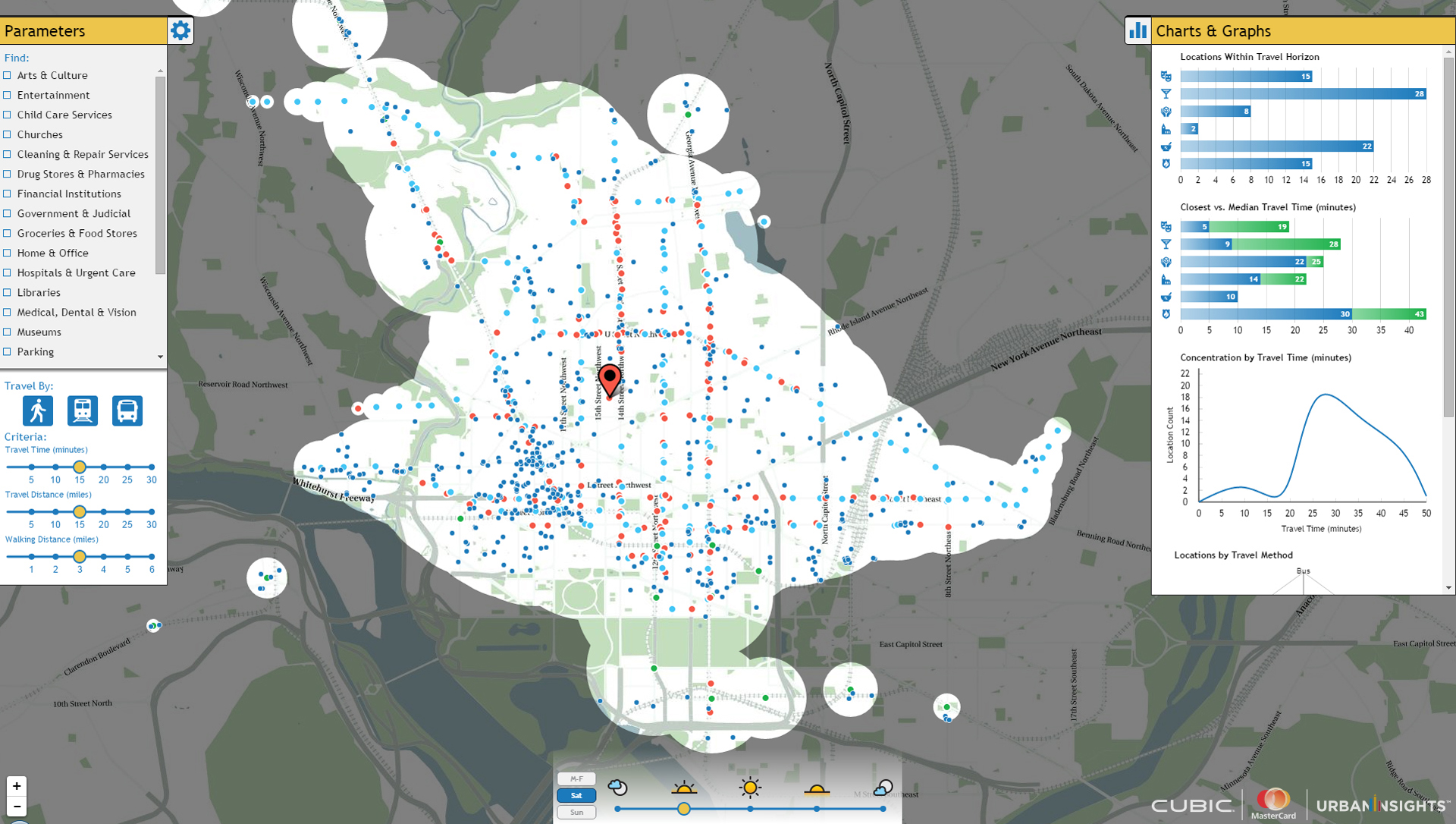 Mastercard’s entry into the smart city agenda centers on the transportation network, a focus personified by the company’s relationship with Cubic Transportation Systems. Together, the two organizations are building links between the systems used by major cities so that travelers can move from city to city more efficiently.

So, hypothetically, a passenger might be able to use the same secure mobile app in the New York subway to pay for a ticket to the London Underground. The data connected to that "mobility" service could be used to inform a wide range of municipal services.

For example, the police might deploy more officers to areas of a city, based on an analysis of where fares are being bought; streetlights might be turned on or off, based on where pedestrians are congregating; over time, the data might be used to inform development decisions.

Mastercard and Cubic were able to track, for example, the impact of New York City’s "Car Free Day" on both the public transit system and local businesses. Their data showed an increase of 30,000 riders on the subway, along with a significant uptick in the use of bicycles. At the same time, however, there was little adverse on commercial activity.

"By combining insights from city government, the private sector and academia, we stand a better chance to address the pressing issues of managing traffic congestion and improving quality of life for residents and visitors alike," said Carlos Menendez, president of enterprise partnerships for Mastercard, in a statement.