Making its debut in the U.S. market, the all-electric Mitsubishi i-MiEV has knocked the Honda Civic Natural Gas car from its eight-year reign as No. 1 on the annual Greenest Vehicles List compiled by the American Council for an Energy-Efficient Economy.

The organization released its annual rank and spank lists this morning of the vehicles that are the "Greenest," the "Meanest" (the worst) and the "Greenest Choices" for their class based on tailpipe emissions, fuel economy and emissions related to climate change.

With a combined city and highway fuel economy of 112 miles per gallon equivalent, the Mitsubishi subcompact fared the best among the 12 cars that made the Greenest List. It scored 58 out of a possible 100 points -- the highest tally ever -- in a list that for the first time is dominated by hybrids.

This year's lists, which coincide with the first year that EPA's stricter fuel economy standards are in effect, reflect car makers' response to the market demand for better fuel economy and a broader array of green choices.

And the increased competition to produce electric cars, hybrids and super and ultra low emission vehicles made it particularly tough to win a place on the 2012 list. For example, Hyundai, Kia and Infiniti brought hybrids to market for the 2012 model year, but none scored among the top 12.

"It was a fight to the death to make the Greenest List this year," said Shruti Vaidyanathan, lead vehicle analyst for the ACEEE.

The Honda Civic Natural Gas, a compressed natural gas vehicle previously branded as the Honda Civic GX, slipped to the No. 2 spot. And the Chevy Volt, which was 12th on the 2011 list, didn't make the cut this year. In fact, no U.S. brand is among the 2012 top 12.

Here is this year's list of the most environmentally friendly cars: 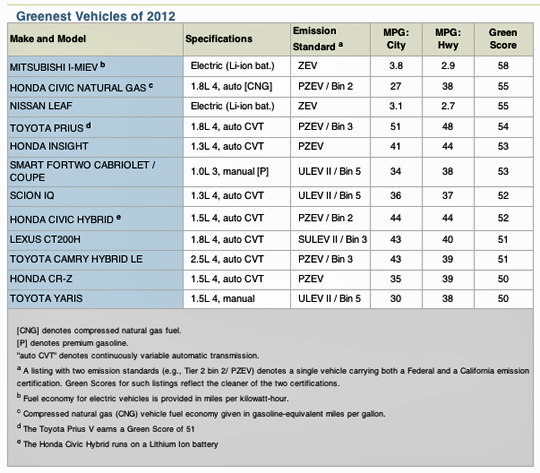 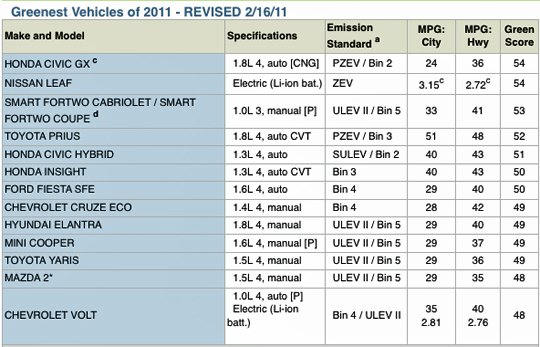 The CNG car from Honda had led the list for so long that its being bested by the i-MiEV, which was introduced as a fleet car in Japan in 2009, was "a little bit of a surprise," said Vaidyanathan. "I didn't think this was the year that it would be knocked off."

The ACEEE's annual rankings, which are available at greenercars.org and via the organization's website, are closely watched by car makers and consumers. The group's annual Green Book, which is now in its 18th year and provides a green score for all cars in a given model year, also is a popular tool -- so much so that ACEEE makes the entire database available via subscription.

The average score among 2012 cars and trucks is 35 and the lowest is 17, a score shared by the Chevrolet G3500 Express Cargo, the GMC G3500 Savana Cargo, which are essentially twins, and the Ford E-350 Wagon.

While U.S. cars are absent from the Greenest Vehicles List this year, they occupy eight of the 12 slots on the list of vehicles that are worst for the environment. That roster is usually dominated by European sports cars. Here is this year's list: 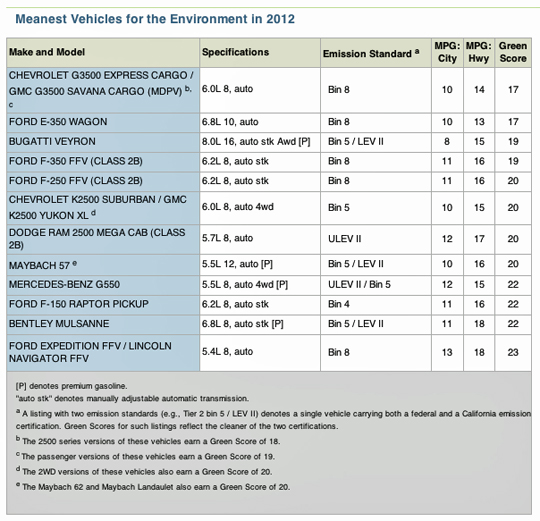