Other companies talk about their environmental footprint. At Molson Coors, the sustainability message is conveyed by a "beer print" -- the positive and negative impacts the company can have on the people and the environment.

For a company that describes its corporate culture and values as "Our Brew" and promotes water conservation in a campaign called "Every Ripple, Every Drop," using the beer print imagery seems like a natural.

Perhaps, but coming up with the concept didn't occur overnight, according to Bart Alexander, Molson Coors' chief corporate responsibility officer. I asked Alexander for the story behind the beer print. Here are highlights from our conversation:

To fully understand the beer print, it's helpful to be acquainted the history of Molson Coors, according to Alexander.

The firm brings together the legacy of the U.K.'s Bass brewing company and Canada's Molson brewery, both founded in the 18th century, and the firm established by Adolph Coors, who tapped the waters at the foot of the Rocky Mountains in the 19th century to create his brand. 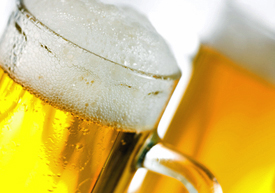 In 2002, Coors brought Bass under its aegis by acquiring Bass Brewers' business in England and Wales. In 2005, Coors and Molson combined forces in what the company termed as a merger of equals. And in 2008, Molson Coors began a joint venture with SABMiller, called MillerCoors, to combine their businesses in the U.S. and Puerto Rico.

A New Vision and BHAGs

The same year, there was another significant change, Peter Swinburn, who started in the beer business at Bass in the 1970s in Wales, became CEO of Molson Coors.

"Peter wanted to sit down with the organization and put together a new strategic plan for the company," said Alexander. "He established a global vision. He established a framework for how we see ourselves, which we call 'Our Brew.' "

With Swinburn at helm, the company also laid out the steps it wanted to take to achieve that vision, Alexander said. "I think most people would call them strategic platforms.," he said. "We called them BHAGs -- big, hairy, audacious goals."

There were four. The first two were typical for any business: profit growth and growth of strategic brands. "The other two were a bit non-conventional," said Alexander. They called for having the most engaged workforce in the beer industry and achieving recognition as "being world class in corporate responsibility."

Taking Steps Forward and Then ...

The company set about pursuing the BHAGs. It pushed the framework for success across the lines of business, identified stakeholders -- investors, employees, retail customers, consumers and communities  -- and sought to better connect with them.

The firm had begun reporting to the Carbon Disclosure Project in 2005, and by 2009 the company's bolstered efforts in corporate social responsibility started getting attention.

"OK, so at this point, we are now talking to our senior management team, and we're talking to our employees, and we put up our website, we put up our CR report, and we're starting to get recognition for what we're doing," said Alexander. "I have to say what we found was that the CR community really liked what we were doing, understood it. They liked all the matrices, all the complexity of all the work we were doing. They saw that we were being comprehensive.

"But I want to be honest to say, internally, at that point, a lot of people -- a lot of our management and our employees -- said, 'We don't get it. This seems very complicated.' And, quite honestly, that was very confusing to me because I knew our employees and our leadership team."

The workforce and its managers had endorsed the BHAGs, he said, and in an annual survey, employees said they considered the company world class for its social and environmental commitments. Yet they didn't understand what the company was doing to make good on those commitments or their roles in helping to make that happen.

Making an Impact with an Imprint

"I started to realize that the way we talk to each other in the corporate responsibility world has a lot of jargon to it, a lot of complexity to it, and I knew we had a problem when what we were doing was not making sense to our own employees," said Alexander.  "So, we took a step back and spent some time trying to figure out how can we better communicate what we're doing."

At the end of a two-and-a-half-day session to brainstorm a solution, a cross-company team arrived at a consensus. "We thought we had something we could all live with, but none of us loved it," said Alexander.

Then a manager from the U.K. stepped up to the board that was being used to log ideas and she peeled off a yellow sticky note. On it was an idea that was brought up on Day 1 of the meeting, discarded and left in a corner of the memo board.

" 'I want to come back to this. I think it's very simple,' " Alexander recalled her saying. "She said, 'Every time you put a beer down, you leave a mark on the table or on the coaster. It's a beer print. And just like a beer leaves a beer print on a coaster, we leave a beer print on our people, on the communities, on the environment, on the earth. Why can't we just explain to people that our objective in corporate responsibility is to improve our positive beer print and reduce our negative beer print?' " 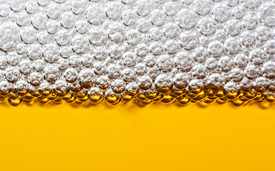 The lessons learned: Don't forget that your employees are both your core audience and your core asset. And above all, don't make anything more difficult than it needs to be.

Or as the manager from the U.K. asked her fellow brainstormers, "Can't it be that simple?"

Raising the Bar for Sustainability

This past fall, Molson Coors went big on its "Every Drop Every Ripple" and "Our Beer Print" message in its second major observance of Water Stewardship Month. The firm has been a lead sponsor of the Carbon Disclosure Project's Water Disclosure program since 2010, and has a goal of reducing water use per unit of production by 15 percent by the end of 2012, based on 2008 levels.

Last year, the CDP recognized Molson Coors in the organization's Carbon Disclosure and Carbon Performance leadership indexes. And for the first time, Molson Coors was included in the Dow Jones Sustainability Index for North America. Of 143 firms named to the list, Molson Coors was one of only six in the Food and Beverage category.

Molson Coors heralded the achievements as milestones toward the BHAG about gaining recognition for world class efforts in sustainability. It now plans to step up its CSR work, emphasizing increased water efficiency and sustainability within the supply chain.

"The fact that we’ve made Dow Jones' [Sustainability Index] is by no means the end of the story," Alexander said. "The metaphor I always use is it’s like we’re in a race and, at a mile marker, someone took a picture. We’re in the front of the pack, or we’re at least within the leaders, but that doesn’t mean that we can stop and catch our breath. We need to keep running harder because there are people who are running with us and people behind us trying to catch up. Their goal is to be ahead of us at the next mile marker."

For more on Molson Coors' efforts in CSR, listen to Chrissy Coughlin's recent interview with Bart Alexander for her Nature of Business podcast on GreenBiz.com. Alexander also participated in GreenBiz's year-in-perspective stories on accomplishments and lessons learned and in articles about 2012 goals and sustainability drivers.

Photos of cold beer glasses, beer in mugs and beer foam via Shutterstock.com