A Moore's Law for Renewable Energy

"Oil companies should think more like technology companies." So said one of the world's largest oil companies, the Chevron Corporation, as part of a 2011 public outreach campaign. This idea deserves to be taken seriously, and at a global, industry-wide scale. Since World War II, the computer industry has transformed the global economy and the patterns of everyday life in ways that would have been unimaginable before.

Could energy companies -- especially those developing renewable technologies such as solar and wind power -- spark a similar transformation by emulating the kind of exponential technological improvement that brought about the digital age?

Moore's Law is well known as a description of the dramatic and continuing reduction in the size and cost of computer technology. In 1954, the average price of a transistor was about US$5. During the next half century, the price of computing power steadily dropped until an integrated circuit was worth about a billionth of a dollar.

This dynamic was first described formally in 1965, when Gordon Moore -- a pioneer in the semiconductor industry and cofounder of the Intel Corporation -- published an article in Electronics, observing that the number of components that could be mounted economically on a standard computer chip was doubling every year, and forecasting that this scaling effect would continue for at least 10 years.

Moore's position within the industry and his technical knowledge gave his words credibility and authority. His prediction, dubbed "Moore's Law" in 1972, has held true for nearly five decades, guiding the development of a burgeoning and increasingly powerful industry.

Many people believe that Moore's Law is driven automatically by the inherent qualities of computer circuitry. Certainly Moore himself recognized the innate pace of technological innovation. In 1975, he recalibrated his prediction in a speech to the Institute of Electrical and Electronics Engineers [PDF], adjusting the rate of doubling from every year to every two years.

However, even Moore could not see indefinitely into the future. Today's computer evolution depends on breakthroughs in nanotechnology and semiconductor materials that were completely unforeseen in the 1970s, and that do not relate directly to the scaling effect at the heart of Moore's original observation.

Moore's Law held true, however, because of its own effect on the industry. As a clear, credible, and widely accepted metric, it created an expectation that the doubling of computer power every two years would generate huge financial opportunities. Engineers and entrepreneurs organized themselves to realize these gains, attracting large and consistent capital investment, which in turn spurred innovation.

As the costs and prices of these successful technologies dropped, this created even higher expectations, driving more investment in innovation and further cost reductions. Moore's Law acted as a powerful organizing principle for the semiconductor industry.

Moore himself recognized this power. In an interview with television host Charlie Rose in 2005, he said that his law had "kind of become a self-fulfilling prophecy."

When Rose asked if Moore's Law would ever become obsolete, Moore replied, "Talking to the Intel technologists, they think they can still see reasonably clearly for the next four generations. That's further than I've ever been able to see. It's amazing how creative the people have been about getting around the apparent barriers that are going to limit the rate at which the technology can expand."

There are many reasons to be skeptical about generating a similar dynamic with energy. Power generation and oil and gas are mature industries, laden with legacy infrastructure. Many energy technologies, including photovoltaics, date back to the 19th century or earlier. Innovation involves such diverse fields as hydraulic mechanics, geologic monitoring and sensing, and wind turbine design. The companies involved are scattered and diffuse, and their interests often conflict.

Most daunting, the expectations that drive the majority of energy investment today -- including the assumptions of all-important institutional investors -- focus not on technological progress, but on such external factors as the price fluctuations of oil, reserve replacement ratios, and government (or citizen) regulations such as carbon taxes or NIMBY ("not in my backyard") restrictions.

Although some investors promote clean energy, their sense of urgency is easily dissipated. High-tech companies see Moore's Law as an existential imperative; if they fail to keep up, they lose much of their relevance. By contrast, there is little perceived punishment in the energy industry for failing to innovate.

Indeed, energy companies have tended to support only the kind of innovation that would improve the margins of their current business models. Thus, in 2009, when it looked as though the U.S. might pass a climate bill, both coal and oil companies were squarely behind the technology called CCS (carbon capture and sequestration), largely because it supported their embedded investments in oil and coal plants.

Yet changes in economic, environmental, and demographic trends could spur the creation of a Moore's Law for energy. The first major trend is global demand.

Over the next 40 years, according to Jim O'Neill, the chairman of Goldman Sachs Asset Management and the economist known for coining the acronym BRICs, worldwide annual productive economic growth will triple. As billions of people enter the consumer economy, global energy use will rise sharply -- according to some estimates, from about three cubic miles of oil (CMO) annually in 2009 to between six and nine by midcentury. (CMO is a measure of usage developed by SRI International engineer Hewitt Crane to enable comparisons of diverse energy sources.)

At the same time, the use of fossil fuels will be increasingly restricted because of greenhouse gas emissions, and nuclear energy, especially after the Fukushima disaster, will continue to face regulatory, cost, and public opinion hurdles.

Renewables are not yet technologically advanced enough to provide more than a tiny fraction of the global energy used today -- in 2009, wind and solar together accounted for less than 1 percent of global energy production. Without a continuous cycle of innovation, driven by a model such as Moore's Law, all the forms of energy supply put together may not be able to meet demand.

And as several observers have noted, the technologies of solar and wind generation are not yet risk free for investors, but they have become diverse and sophisticated enough to create new markets for energy generation. (See, for example, "Renewable Energy at a Crossroads," by Christopher Dann, Sartaz Ahmed, and Owen Ward, s+b, Autumn 2011. [Subscription required]) That itself is sparking new interest in investment.

There are even signs of Moore's Law–style cost decreases in several energy sectors, though the pace is not as fast as it is in high tech. One example is natural gas turbines, used to generate electricity in power plants. Between 1955 and 1980, 10 consecutive doublings of gas turbine capacity occurred, reducing the cost between 20 percent and 10 percent each time.

During those years, the cost of a natural gas–based kilowatt dropped to about one-fifth its original price, adjusted for inflation. The researchers who charted this -- Arnulf Grübler, Nebojša Nakićenović, and David Victor of the International Institute for Applied Systems Analysis -- also looked at data on Japanese photovoltaics, and found a more than 90 percent decrease in the cost of a kilowatt between 1973 and 1995.

Still another example can be found in the economics of solar installation business models. Over the years, the owners and managers of many commercial buildings have put off installing solar energy systems because of their cost expectations: huge up-front capital expenditures and ongoing operation and maintenance expenses.

In 2003, however, an American photovoltaic company called SunEdison removed those barriers by providing solar energy as a service. Customers could sign up for long-term electricity contracts at guaranteed pricing per kilowatt-hour with no capital investment (other than roof space) required. These successful economics brought new investment from capital markets, which allowed SunEdison to offer more types of franchised installations.

The industry is still waiting for its Gordon Moore: someone with the credibility and insight to establish viable expectations about energy sourcing and usage that will drive investment and foster innovation.

During the 30 years from 1979 to 2009, according to Cleantech Blog writer John Addison, solar power capacity worldwide grew at an annual rate of 33 percent, and it is forecast to exceed 40 percent growth by 2020. Wind energy capacity grew between 25 and 40 percent annually between 2000 and 2010, according to wind energy research group BTM Consult.

This growth, of course, will not be easy. Both solar and wind are very land-intensive technologies with their own environmental footprints. Their growth is not sustainable unless the infrastructure is developed to support them, such as the capabilities to feed locally generated power into the grid seamlessly or to improve energy storage technologies.

If transformational change does come to the energy sector, it will not happen in a vacuum. Consistent and thoughtful public policies on energy and carbon could foster the constancy of purpose required for the transformation away from a fossil fuel–based economy.

Yet even with minimal regulations against carbon emissions, and the current low baseload capacity of solar and wind, renewables may well have the most potential among energy technologies for rapid growth and innovation.

Like Moore's original law, a 4/7 Rule for energy might need adjusting over time as new knowledge emerges, but the overall aim will remain unchanged: creating a clean, affordable, and secure energy future with huge growth opportunities, in which continuous innovation supplants oil price fluctuations or the reserve replacement ratio as the source of urgency for the industry.

A rule like this, as Gordon Moore showed, can be both an indicator and instigator of breakthrough innovation -- just the sort that is needed for energy over the next 40 years. 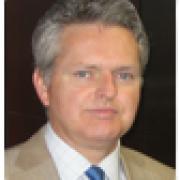 Why disruptive sustainability is the new leadership framework

I wish Jeremy Grantham had gone to jail

How to Shape a Global Approach to Climate Change: More Davos, Less Denmark

See all by Andrew McKeon