Most food companies ignore the risks of water scarcity

Water is the key ingredient for growing food — so essential that 70 percent of the world’s fresh water supply goes into agriculture.

Yet, according to a new report, most big food companies still don’t evaluate water risks in their farming supply chains.

Even as severe droughts curtail harvests in California, Brazil, India, China and Africa, only a third of the 37 biggest publicly-traded food companies include water risk in the supply chain when weighing factors for major business decisions, according to Ceres, the non-profit investor group that advocates for sustainability.

“Water has been treated as something cheap and limitless,” said Brooke Barton, senior water program director at Ceres and co-author of the report Feeding Ourselves Thirsty: How the Food Sector is Managing Water Risk.  “While it is still cheap” because of the lack of appropriate accounting for natural resource use and lax regulation around water use, “it is not limitless,” she said speaking to reporters Thursday as she released the report.

Increased demand, climate change, pollution and lax regulation have led to such severe water scarcity in much of the world. Indeed, the World Economic Forum identified water scarcity as a top risk facing the global economy. Some companies are learning that the hard way as they write off losses from faltering production in drought plagued California, Texas, Mexico and South America.

"Agriculture and food production as we know it in the United States is at risk, perhaps a far greater risk than we realize," said Jay Famiglietti, a senior water scientist at NASA’s Jet Propulsion Laboratory leading a satellite study of freshwater availability changes around the globe. Participating in the teleconference with Ceres, he said the world's farmers are relying on groundwater for irrigation to an alarming degree.

"Unfortunately, in many parts of the world, that groundwater is rapidly disappearing," he said.

In California, 80 percent of agricultural irrigation is coming from groundwater during this current drought. Because of the implications for future water availability, that is a risk food companies should weigh.

Ceres ranked the 37 companies on the rigor of their water risk evaluation and mitigation efforts. Good scores were given to Unilever, The Coca-Cola Company, Nestle, General Mills, PepsiCo, Kellogg, Molson Coors Brewing and Campbell Soup — all of whom had some sustainability practices around water use or evaluation and mitigation work, with Coca Cola going so far as to invest in restoring watersheds.

Included on the list of companies doing almost nothing about water risks are Pinnacle Foods, whose brands include Duncan Hines, Mrs. Paul’s frozen dinners and Wish-Bone salad dressings, along with poultry providers Pilgrim’s Pride and Tyson Foods.

Kraft Foods Group also got poor grades and Monster Beverages is the sole beverage company to appear to completely ignore water risk, scoring "1" on a scale of 1 to 100. By comparison, Coca-Cola scored 67. 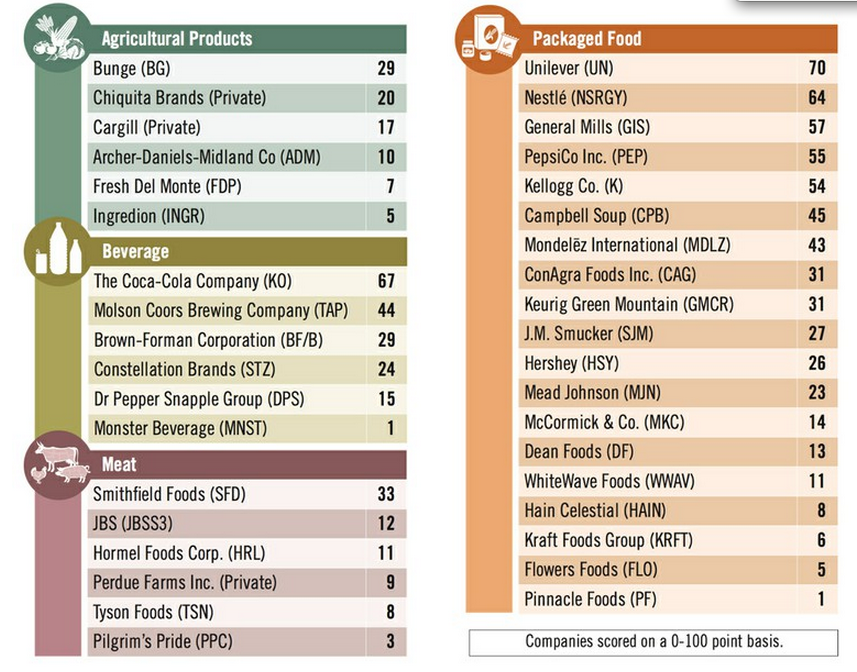 “Risk is multifaceted, and is not all captured through traditional risk measurements,” she said.

Sustainability-oriented variables not captured include climate change and natural resource scarcity, she said, though CalPERS is beginning to evaluate these outside risks with others in the course of due diligence on companies.

“We think it is vitally important that these material risks — or risks that may become material over time —are better integrated” into financial evaluations, Simpson said.

She added that the U.S. Securities and Exchange Commission needs to embrace the reality of these risks. In the meantime, Ellen Silva, senior sustainability official at General Mills, noted that her company is already taking water risks into account.

"Water is the leading ingredient in food production," Silva said. "It is imperative to our business."

When it comes to particular inflection points for how those risks might manifest in day-to-day businesss, Silva zeroed in on the supply chain — a full "Ninety percent of the water that goes into creating our products is outside" of General Mills' direct operations, she said.