<p>Planters plans to transform neglected urban plots in four U.S. cities into peanut-shaped community parks as part of an eco campaign that includes the rollout of a new Nutmobile, the company's brand mascot on wheels, which now runs on biodiesel and sports solar panels and a wind turbine.</p>

With the help of The Corps Network and neighborhood volunteers, Planters plans to turn disused plots of land in New Orleans, Washington, D.C., San Francisco and New York City into peanut-shaped community greenspaces.

The Planters Groves, designed by landscape architect Ken Smith, will feature native trees and plants as well as benches and other amenities made from reclaimed building materials in an eco campaign that includes the rollout of the company's latest Nutmobile, which now runs on biodiesel and sports solar panels and a wind turbine.

The efforts, part of a promotion the company is calling "The Naturally Remarkable Tour," blend urban revitalization, conservation and volunteerism with whimsy to create what Planters hopes will be engaging community projects that serve as living lessons in sustainability.

Though designed by Smith, funded by Planters and coordinated with The Corps Network, each grove is to be built and maintained by local volunteers and neighborhood groups.

"We want to let people know what it's like to be a planter," said Jason Levine, senior director of marketing for Planters. The initiative is based on a concept that's core to the company -- peanut crops help replenish the earth -- and underscores the firm's sustainability efforts, he said.

Planters and The Corps Network plan to detail their project and Smith's designs later today at a presentation scheduled at the Global Green USA pre-Oscar party in Hollywood. The latest model of the Nutmobile, fresh from a green makeover, also is to make its debut at the event.

Finding common ground between Planters and The Corps Network was easy, according to Levine and James Jones, the network's senior vice president and chief innovation officer.

The Corps Network helps unite the 143 Service and Conservation Corps in the U.S., which enroll more than 30,000 young men and women annually and muster over 225,000 community volunteers, who together deliver upwards of 21 million hours of service each year, said Jones.

"We saw a real synergy between both our organizations with our commitments to community, conservation and sustainability,"Jones said. "When Planters approached us, we thought it would be a great natural fit."

The Planters Groves (renderings of the grove planned for New Orleans' Central City neighborhood appear at the top of the page and below) are intended to deliver their lessons through fun, according to Levine and Jones, who pointed to features that are designed to convey a spirit playfulness.

The shape of a peanut is echoed throughout the groves. The curved silhouette will be seen in the layout of the gardens, a plaza, benches and planters. A sculpture of Mr. Peanut will sit on a bench in each of the groves. And in a further tip of the hat to their sponsor, each grove will include legume plants. 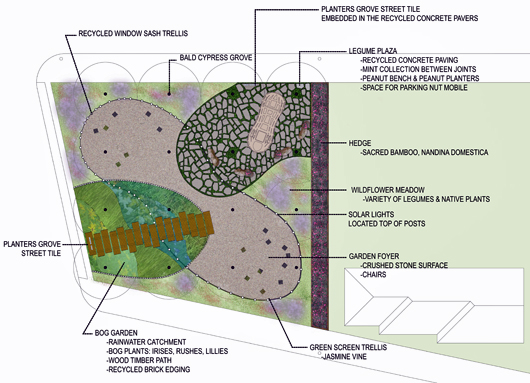 In addition to having trees and plants that are native, or adapt well, to their locales, the groves will include elements that evoke their communities. Reminiscent of the lacy trellises outside old-style Louisiana homes, trellises made with locally sourced recycled window sashes will help form a surround in the New Orleans grove. Recycled bricks from the area will edge a bog garden that serves as a rainwater catchment and mint will be found in the joints of the plaza paving.

"We're very, very excited about this," Jones said. "We want these places to be peaceful oases and areas for engagement." The use of locally sourced and reclaimed materials provides further points of connection for the community, he said.

Sourcing land for the groves is another opportunity for community involvement. In New Orleans, the site for the grove is roughly the size of a block and was made available through a lease arrangement donated by the property owner, according to Jones.

Sites are being scouted for the groves in Washington, D.C., San Francisco and New York City.

"These will be great places for communities to get back to nature and experience the outdoors," Levine said.

The New Orleans grove is to expected to be complete by late March, with all four groves complete by the end of the year, Jones said. The Planters "Naturally Remarkable Tour" will thread its way from project city to project city with the new Nutmobile in the vanguard. 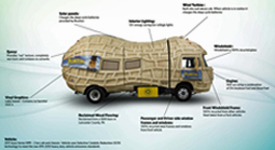 The vehicle has solar panels on the roof and a wind turbine above the cab that charge a battery, which powers vehicle lights and audio when the Nutmobile is stopped. For example, a two-hour drive is expected to generate and store enough energy to power a tour-stop event for about an hour, according to the company.

Also, several parts of the vehicle are made from reclaimed or recycled materials. Wood from an 1840s barn that was being dismantled was used for interior flooring. The windshield is 100 percent recycled glass and its frame is recycled steel. Passenger and driver's side windows and frames also are recycled. (Other environmentally friendly elements of the vehicle are detailed in the diagram to the right.)