This is an excerpt from the book "Unsafe Thinking: How to be Nimble and Bold When You Need It Most," by Jonah Sachs. Copyright 2018 by Jonah Sachs. Used with permission of publisher, Da Capo Lifelong Books, an imprint of Perseus Books, LLC, a subsidiary of Hachette Book Group, Inc.

Sure, there is the myth of the lone innovator, the brash rebel with the devil-may-care attitude who changes the world on his or her own. But in an exhaustive and widely accepted review of key innovators in art, science, and politics since ancient times, sociologist Randall Collins identified only three who truly acted alone (Confucian metaphysicist Wang Ch’ung, 14th-century Zen master Bassui Tokusho, and 14th-century philosopher Ibn Khaldun). The rest, from Beethoven to Adam Smith to Charles Darwin to James Jamerson, the little-known cowriter of more No. 1 hits than Elvis, the Beatles, the Rolling Stones, and the Beach Boys combined, did their work from within a network of peers who shared, critiqued and honed each other’s ideas. 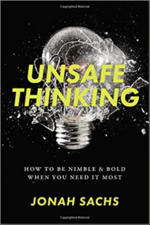 While we need other people, they are often deadly. The mere presence of other people has been consistently shown to depress creativity, while groups tend to enforce all the attitudes of safe thinking we’ve been exploring ways to overcome: they rush too quickly to consensus, rally around expert leaders, punish dissenters, quickly harden their shared sense of right and wrong, and unless directed otherwise, squash risky and unfamiliar ideas in the name of efficiency and practicality.

Trying to practice unsafe thinking — the ability to depart from standard operating procedures in order to achieve breakthroughs — in tandem with others can lead in one of two directions. Either we will find ourselves frustrated and eventually silenced or ostracized from the group, or things can turn out for the better. Whether we sit atop an organization or find ourselves simply part of the team, we have the opportunity to infect an entire group with creativity and boldness. I ultimately discovered a well-tested set of practices to help us get to this outcome, and thus what began as an individual journey of self-change now becomes one of cultivating leadership and a commitment to the growth of others.

Escaping the trap of agreement

Of the "Big Five" traits psychologists commonly use to describe an individual’s personality, none is quite so appealing as "agreeable." Here are but a few of the lovely characteristics of highly agreeable people: they are trusting, easy to get along with, cooperative, sympathetic and selfless. It’s no wonder that high schoolers tend to rate their agreeable peers as more likable, while bosses prize their most agreeable employees as team players. When a bunch of agreeable people get together, however, they often wind up focusing more on making each other feel good than accomplishing anything of value.

Over a 20-month period, the University of Richmond’s Dejun Tony Kong watched 42 teams take on a difficult change-management consulting project. He found that the teams made of highly agreeable people not only performed worse than more cantankerous teams but often couldn’t tell when things were going wrong. They judged their satisfaction with their team based on how good it felt to be together rather than what they were getting done. Teams with a few disagreeable individuals showed a different pattern. Not only did they perform better, but their satisfaction tended to track well with their results. Feeling good came not from getting along but from making progress, and so they had a functional internal compass to guide them to success.

Feeling good came not from getting along but from making progress, and so they had a functional internal compass to guide them to success.

The first takeaway here is that we should stop spending so much energy trying to make others feel good, and if nobody else is doing it well, we should strive to be an occasionally disagreeable member of any group we’re in. But Kong’s study also highlights another important and subtle rule about teams: success derives from disagreement but not of the sort that depresses a team’s satisfaction in working together.

Perhaps the most disagreeable person I ever met once sauntered into a board meeting of a human rights organization halfway through the proceedings. He demanded we stop what we were doing and fill him in on the work so far. When we did, he puffed himself up and began to say things like, “Well, I’m not part of your do-gooder world, but in the corporate world we take a much more rigorous approach.” He challenged everything we had worked hard to construct and questioned our individual qualifications. Before long, I became aware he was trying to do something that made sense. He was trying to introduce a bit of grit to the proceedings, to break us out of our consensus. His efforts, however, were a disaster. Group satisfaction plummeted. The chair quietly asked him to stay away from the next day’s meeting, and we went, as a group, right back to what we were doing before this self-styled gadfly walked into our lives.

We need not denigrate, embarrass, or resist our teammates to break out of the trap of agreeableness. Even kind and compassionate individuals can lower group agreeableness; in fact, they’re likely better at doing so while keeping group satisfaction high. So how can we disrupt harmony without destroying morale? One way is to gamify disagreement by finding mechanisms that both encourage and depersonalize controversy. Here’s one example of how to do so:

The concept of "red teams" comes from military war games in which the blue team represents our side and the military strategies we are considering using in the real world. The red team takes the role of the enemy, and its job, of course, is not to make the blue team feel good about itself. Red team members are supposed to expose every possible flaw in their opponents’ plans and defeat them if possible. Despite the fierce competition, everyone playing the game knows they’re actually on the same side with a common goal of making the chosen strategy better, and there’s a culture of respect for those who run excellent red teams even though they occasionally best their colleagues or superiors.

This kind of approach can work for any group. As an idea gains traction and support, we can take a timeout and assign it a red team tasked with looking it over and raising every relevant objection or scenario in which it might fail. Objections like "You always come up with impractical ideas" are of course out of bounds. It’s about the work product, not the producers.

Objections should never be sugarcoated; no need to say "Well, I like the idea but ..." On the other hand, challenges should always be delivered with respect to make sure teammates don’t spike emotionally and cease hearing us. After carefully listening to the red team, an idea’s proponents then step away and focus on addressing the objections they believe to be most important. Challenging as this exercise can be, red team games are often one of the most intellectually engaging and growth-oriented parts of a creative process. They crack agreeableness without cracking team bonds.

When people get together, they tend to magnify the problems of safe thinking. They overweight the ideas of leaders, punish outliers and rush to conclusions. But groups with disagreeable people who encourage productive conflict can escape these traps. If disagreement isn’t flowing easily, gamify it.

What do you do to disrupt the agreeableness of the teams you work on? Remember, doing it well means doing it with kindness and respect. Do you invite ideas from the edges and share them when you have them? If you’re a leader, remember that shared information bias is weakened when leaders listen first and invite everyone to speak.

People are more likely to act and think in unsafe ways when the environment around them is safe. A study on political correctness demonstrated that creating a welcoming and protective environment didn’t depress group creativity but enhanced it.

People are more likely to act and think in unsafe ways when the environment around them is safe.

As a leader, do you work to make sure everyone feels safe enough to take risks? Ask lower-status individuals in your organization what holds them back. You’re likely to discover that a few tweaks can release a lot of creativity.

How people gain status, money and esteem in an organization says more than any policy or stated philosophy. Once careers can be built on exploration and good questions, not just definitive discoveries, far more risk taking becomes possible.

Do you reward those you lead for things other than success? Directly incentivize other key activities like taking intelligent risks, reporting failures, and posing smart questions. This can redirect teams away from conservative approaches and into the unknown.

Chemical Reform Bill Would Shift Burden of Proof to Industry

LEED: A Scorecard for Green Buildings

How gamification can help your business play on sustainability's team