Devices developed by Lawrence Livermore National Laboratory that could save the U.S. trucking industry $10 billion a year in diesel fuel are being tested at NASA Ames Research Center, home of the world's largest wind tunnel.

LLNL and heavy truck and military vehicle-maker Navistar Inc. turned to NASA Ames to further develop and test the devices that are designed to sharply reduce the aerodynamic drag affecting semi-trucks, the project partners said this week.

Pressure differences around the vehicles cause aerodynamic drag, and traveling at highway speeds, a big rig uses more than half the energy produced by its engine to overcome the drag. Rolling resistance consumes about 30 percent of usable energy.

Fitting devices into spots that produce the most severe drag -- the trailer base, the underbody and area between the tractor and trailer -- could increase fuel efficiency as much as 12 percent, researchers say. 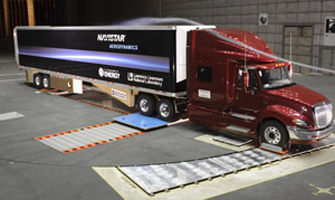 The change would prevent the need for 3.4 billion gallons of diesel fuel and the release of 36 million tons of carbon dioxide emission annually, which LLNL says is about the same amount of CO2 emitted from four 1-gigawatt power plants every year.

LLNL lead scientist on the project Kambiz Salari says the devices to retrofit semis could be brought to market in three years — and that researchers expect to see even greater fuel savings in tests conducted in the wind tunnel.

In addition to prototype devices that are to be provided by LLNL and Navistar, commercially available devices will also be tested. They are manufactured by Aerofficient, Aeroindustries, AT Dynamics, Freightwing, Ladyon and Windyne.

{related_content}As efforts accelerate to reduce the United States' dependency on fossil fuels, the drive to green the trucking industry is also gaining traction.

Working in conjunction with the North American Council for Freight Efficiency, the Rocky Mountain Institute hosted a gathering in fall to help speed development and adoption of technology that will transform the industry.

And EDF has made tools available to fleet managers that can help them reduce emissions as well as total lifecycle costs. EDF developed the tools in partnership with PHH Arval's GreenFleet program.

In other efforts to ease the environmental impact of commercial fleets, AT&T said today that its 1,000th alternative fuel corporate fleet vehicle is now on the road.

That rollout follows AT&T's announcement last year that it will spend as much as $565 million in this decade to replace 15,000 vehicles with models that run on alternative fuels. (Its target for 2009 was 800.)