<p>The Coyote Ridge Corrections Center, the greenest prison in the United States, reduces water consumption by a whopping 5.5 million gallons and saves its operators about $370,000 in energy costs each year. It also has a solar array that covers 16,929 square feet and relies heavily on natural light to illuminate occupied space.</p>

The greenest prison in the United States reduces water consumption by a whopping 5.5 million gallons and saves its operators about $370,000 in energy costs each year. It also has a solar array that covers 16,929 square feet and relies heavily on natural light to illuminate occupied space.

Those attributes helped the Washington State Department of Corrections earn LEED-Gold certification for the 21-building, medium-security Coyote Ridge Corrections Center in Connell, the first prison to receive such recognition from the U.S. Green Building Council.

The department and other corrections agencies have buildings that have been certified to USGBC standards for  Leadership in Energy and Environmental Design, but so far only Washington State has obtained certification for an entire facility. Certification was awarded in October and corrections officials, who recently received their LEED plaque, celebrated this week by installing the emblem at Coyote Ridge.

The facility is one of 15 in the Washington State corrections system, which has the most LEED-certified buildings of any criminal justice agency in the U.S. 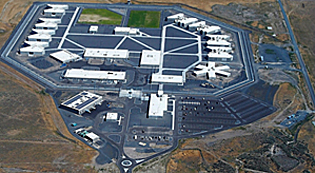 Including the green endorsement for Coyote Ridge, the department has received 12 LEED-Silver and 22 LEED-Gold certifications.

The $230-million, 2,048-bed medium-custody expansion project at Coyote Ridge, which is adjacent to a minimum security facility, began in June 2006 and was completed in October 2008.

The site includes a 100-bed segregation unit and eight "twin pod" 256-bed units of inmate housing as well as medical and mental health facilities; space for inmate programs, industries, food service and administration;  a softball diamond and a soccer field. 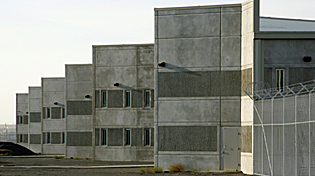 "Viewed from the outside, CRCC is an intimidating and secure medium-security prison," the corrections department acknowledges in a fact sheet for the green building project.

Tall fences topped with coils of razor wire encircle the site. But a closer look reveals a series of long thin windows on building envelopes and designs that are considered state of the art for security and resource efficiency in correctional units.

Four of the eight twin pods -- the buildings shaped like sharply angled butterflies in the aerial photo -- are  "hybrid housing" units that allow the inmates who occupy them more freedom to move around within the structure.

Only inmates who behave well and are ineligible for minimum security because of the crimes for which they were convicted are assigned to the hybrid units, according to the corrections department. So the interiors of the units are finished with resilient materials, such as metal studs, but not the steel and concrete generally used in higher security lockups.

The corrections department said it saved about $3 million per hybrid unit compared to the cost of a typical medium-security housing unit. 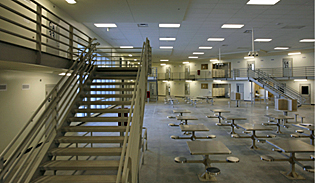 Throughout the facility, low-flow fixtures help save water. Outside, drought-resistant landscaping and measures such as using gravel instead of grass have cut water use by 25 percent. Overall, the prison cut its use of potable water by 20.4 percent during the fiscal year that ended June 30, 2009, according to the latest sustainability report by the corrections department.

The most visible eco-friendly feature is the prison's 71 kw building-integrated photovoltaic solar array, which sits atop a warehouse. 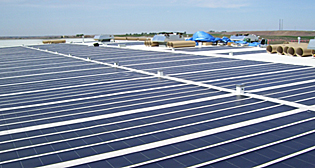 The installation has generated 116.1 MWh of energy since it started operation, supplying about 13 percent of the facility's needs as of yesterday, according to the real-time dashboard for the system maintained by Solar Integrated Technologies.

Less visible features include the use of building materials that are low in volatile organic compounds, which improves indoor air quality.

Corrections department officials said the design-build approach taken by the project team ensured the success of the development and its green building certification. "The key to the success of the CRCC project was the team that planned, designed and constructed the new prison," the department said in its fact sheet. "Innovation and cost savings were provided by every member of the team."

Images courtesy of the Washington State Department of Corrections.