Navigating clean energy innovation in the age of Trump

A new study shows who's leading the pack in the renewables leadership race.

Clean energy has been on a roll.

Back in 2010, just three states received 10 percent or more of their electricity from non-hydro utility-scale renewables. Today, 17 states are members of the 10 Percent Club, with three states (Iowa, South Dakota and Kansas) leading the pack, with 30 percent or more of their electrons from utility-scale wind. Another three states exceed 20 percent non-hydro utility-scale renewables generation (Oklahoma, North Dakota and California). These leaders are politically diverse, with the top 10 states for renewable electricity generation including five red states and five blue states.

As we highlight in this year’s U.S. Clean Tech Leadership Index, state and city leaders are playing an outsized role in the shift towards a cleaner energy mix. Last year, due to a range of economic and policy factors, wind and solar power represented 61 percent of all new electricity generating capacity installed in the U.S. (for the second year in a row).

There’s no doubt that declining costs have been a key driver fueling this rise. In many regions around the United States, utility-scale onshore wind and solar, even without subsidies, beat coal, nuclear and even combined-cycle natural gas on cost for new generation assets.

In many regions, utility-scale onshore wind and solar, even without subsidies, beat coal, nuclear and even combined-cycle natural gas on cost for new generation assets.

Another factor affecting the shift to renewables is supportive regional policies and regulations. In 2016, five states upped their renewable portfolio standard (RPS) targets to 25 percent or more; a sixth, Michigan, extended its RPS to 15 percent and a seventh, Ohio, reinstituted its RPS after having frozen it two years earlier. Five states (California, Hawaii, New York, Oregon and Vermont) have targets of 50 percent or greater and new policy innovations such as electric vehicle, community solar and energy storage incentives and mandates are further moving the proverbial needle.

Cities are flexing their clean-energy muscles, too. Five cities in the index are credited for their 100 percent community-wide renewable electricity commitments (Portland, Oregon; Salt Lake City; San Diego; San Francisco; and San Jose). Atlanta joined this elite group in May, too late to be included in this year’s index scoring. 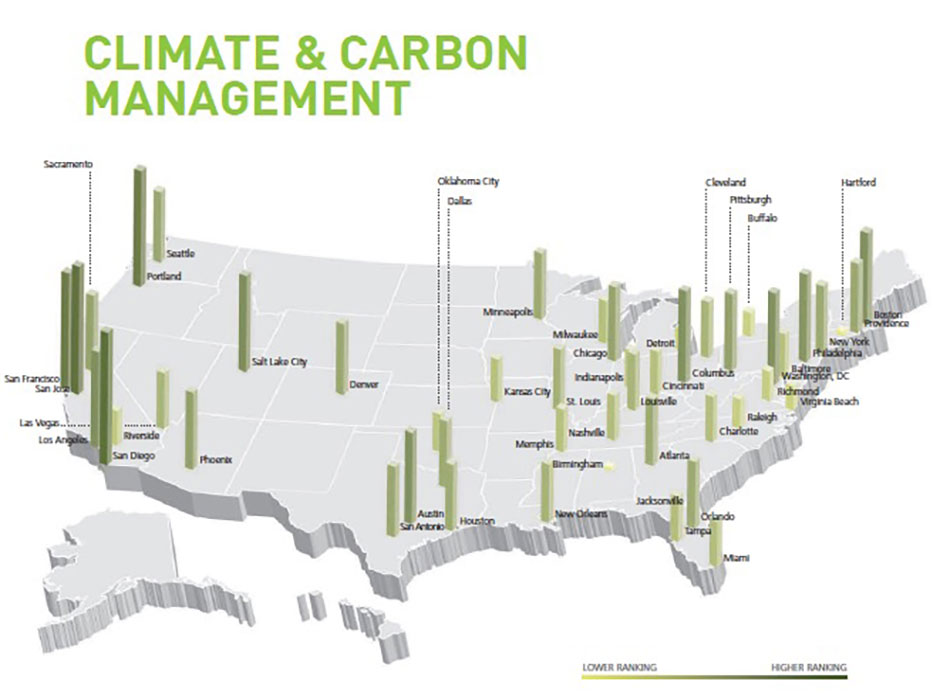 This year’s State Index finds California and Massachusetts topping the rankings once again. California has finished first in the index in all eight years of its existence and Massachusetts garners its fifth consecutive second-place finish, with Vermont, Oregon and New York finishing third through fifth — all repeat performances. Rounding out this year’s top-ranking states are Connecticut, Colorado, Washington, Minnesota and Hawaii. Minnesota is this year’s big mover into the top 10. The Land of 10,000 Lakes makes a return visit with a six-spot leap to No. 9.

San Francisco and San Jose remain the respective leaders in this year’s Metro Index, as they have for the past five years. Washington, D.C., makes a two-spot jump up to third. San Diego (No. 4) and Portland (No. 5) each slide one spot, while Los Angeles holds steady at No. 6. Boston once again snags the seventh spot, followed by three metros that are virtually tied in overall scores: Seattle; Salt Lake City; and Austin. Salt Lake City joins the leaderboard for the first time based on new commitments to greening its electricity supply (including its commitment to reach 100 percent renewable electricity by 2032).

And it’s not just cities and states, but also corporate buyers, playing a key role. The commercial and industrial market is one of the largest procurers of renewables, with more than 7.5 GW of contracted wind and solar power. Many corporations — including Apple, Facebook, Google, Johnson & Johnson, Nike and Philips — are committed to getting 100 percent of their electrons from renewable energy sources.

The commercial and industrial market is one of the largest procurers of renewables, with more than 7.5 GW of contracted wind and solar power.

Working to meet the demands of a shifting market are a growing number of utilities. Berkshire Hathaway subsidiary MidAmerican Energy, based in Des Moines, Iowa, already gets 55 percent of its generation from renewable sources (namely wind), with a goal of reaching 100 percent. MidAmerican Energy is in the process of adding 1,000 new wind turbines across Iowa over the next few years, and according to the company plans to keep rates steady for customers at least through 2029 with the resultant abundant, low-cost wind.

With industry participants and observers concerned about whether tools such as load management, energy storage and grid modernization can help utilities manage such high renewable penetration, the activities of a trusted utility player such as MidAmerican will be critical. Other utilities working to significantly ramp up their clean energy portfolios include Pacific Gas & Electric, Southern California Edison and Xcel Energy.

As the Trump administration works to dismantle Obama-era climate action policies and forwards a pro-fossil-fuel, climate-change-denial narrative, the shift toward renewables is incontrovertible.

Across the United States, coal plants are in the process of being shut down and replaced by natural gas and renewable energy sources for mainly economic reasons. A recent survey by Reuters of 32 utilities with operations in the 26 states that sued to block Obama’s Clean Power Plan found that most had no plans to change their shift away from coal. "Of the 32 utilities contacted by Reuters," the news agency reported, "20 said Trump's order would have no impact on their investment plans; five said they were reviewing the implications of the order; six gave no response… and just one said it would prolong the life of some of its older coal-fired power units."

With more than 2.4 million clean-energy jobs at stake across the U.S. in burgeoning sectors such as solar, wind, EVs and energy storage, I’m hopeful that sanity will prevail. The federal government would be foolish not to follow the lead of states, cities and companies in innovating the clean-energy economy.

The year ahead: Top clean energy trends of 2015

See all by Ron Pernick