The National Basketball Association has tipped off its second annual Green Week with a number of programs that expand tree planting activities and greenwear promotions, which got lots of attention in Year 1, to broader team efforts.

For Green Week this year, April 1 to 9, the NBA also is putting the spotlight on work to increase energy efficiency, waste management and recycling, and green office practices by the league and its teams.

In addition to the highly popular tree plantings, community work will again include park and beach cleanups and renovation of reading and learning centers. And some teams are going a step further. The Miami Heat, who play in the LEED-certified American Airlines Arena, the Dallas Mavericks and the Houston Rockets are working with league partner HP on environmental community service projects, which are to include refurbishing homes with the nonprofit group Rebuilding Together.

At arenas, teams are holding eco-awareness days as they did last year as well as a host of activities that vary from city to city. Team events and activities include providing ticket discounts or conducting contests for fans who carpool or take public transportation to games, awarding fans who are "environmental heros," and holding recycling drives for items that include batteries, cell phones and printer ink cartridges.

The activities are the latest in pro sports efforts to be more environmentally responsible. We wrote about the push last spring as Major League Baseball ramped up a program it began in 2008 and the NBA embarked on its first Green Week. In fall, Eric Meliton of Frost and Sullivan took a look at the greening of pro sports leagues in North America.

This year, several NBA teams have green pages, some of them fairly extensive, on their websites. They offer tips on earth-friendly practices for home and work, the basics of reducing, reusing and recycling and resources to help fans learn more.

The Mavericks call their green page "Guard the Planet," which features a carbon footprint calculator courtesy of the Nature Conservancy. The team is holding its second e-cycling drive this year on April 9 and will take TV’s, computers, monitors, laptops, keyboards, mice, power cords and supplies, computer speakers, handheld devices, cell phones and PDAs, in addition to lightbulbs and batteries.

The page also features a video of team mascot Champ the Horse slam-dunking plastic bottles in a recycling bin.

The Houston Rockets' mascot, Clutch the Bear, is the star of one of the funnier recycling spots. Here is his two-minute spree on youtube.

Last year, the American Airlines Arena and the Philips Arena, home of the Atlanta Hawks and NHL's Thrashers, each received LEED certification as the NBA celebrated its first Green Week.

This year, the Green Week will showcase the Portland Trail Blazers for attaining the first LEED-Gold rating for an NBA facility. The Rose Garden received certification under the U.S. Green Building Council's Leadership in Energy and Environmental Design standards for existing buildings, operations and maintenance. The NBA will cap Green Week festivities this year with a ceremony at the Rose Garden on April 9. 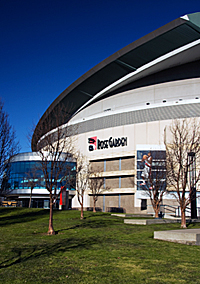 Green sportswear and gear also will be in the limelight this year.

Adidas, the league's officlal outfitter, is again supplying players with special greenwear, but instead of 100 percent organic cotton shirts, players have been issued shooting shirts made with 50 percent recycled polyester. They also were given NBA Green headbands, wristbands and socks made from 45 percent organic cotton.

In another returning event, Spalding basketballs made from 40 percent recycled materials and autographed by NBA players will be auctioned off on NBA.com with proceeds benefiting community partners in the NBA Cares program.

More information about the NBA's Green Week is available at www.nba.com/green.