It’s time to talk about climate change — whether you are a business leader, city planner, educator or just a climate-concerned citizen. But with nearly a third of Americans outright denying the existence of climate change, and more than half (56 percent) of those who concede that the planet is warming up refusing to attribute it to human activities, you've got your work cut out for you.

The purpose of climate communication is to encourage decision-making that will help mitigate further climate change and help communities prepare for climate impacts. We can achieve these changes through several avenues, including increasing public support for new policies and regulation, directly persuading people to change their behavior and changing the decision-making environment to make positive action easier and more automatic. 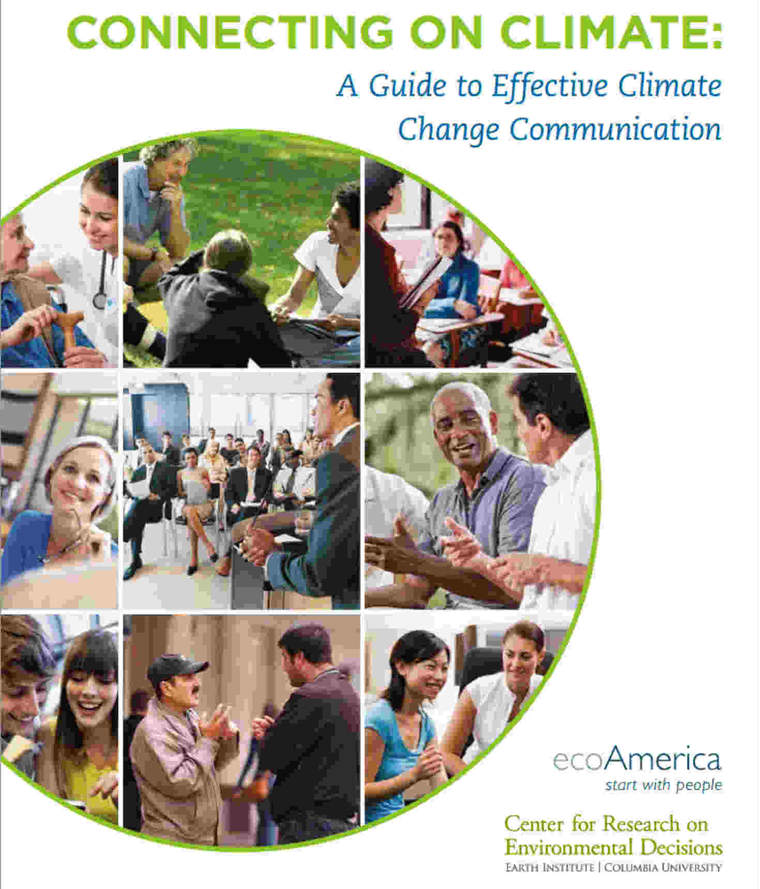 CRED and ecoAmerica
You can download "Connecting on Climate" free.
To help climate communicators “up their game” when engaging Americans on climate solutions of all types and scales, as well as boost American motivation to address climate change, Columbia University's Center for Research on Environmental Decisions and ecoAmerica on Thursday issued a new guide, "Connecting on Climate: A Guide to Effective Climate Change Communication (PDF)." The guide includes 10 principles for climate change communication based on research from a range of social science fields, including psychology, anthropology, communications and behavioral economics.

1. Put yourself in your audience’s shoes

Communicators must be skilled at identifying and appealing to different audiences’ specific worldviews. Cutting-edge social science research shows that people tend to interpret new information through the lens of past experiences, knowledge and social context. This is doubly true when it comes to complex scientific and societal issues such as climate change, where objective facts about the state of the world are not the only factors that influence what people believe and how they respond.

For example, someone who values prosperity might be motivated by a message that emphasizes how clean energy solutions can unlock new economic opportunities for American families. This echoes a key takeaway from the recent American Sustainable Business Council Business Summit: Environmentalism needs an economic message.

2. Channel the power of groups

Climate communicators can harness the influence of groups by helping people view their actions and responses to climate change as part of a larger group effort, whether it is a neighborhood, a company or a faith-based organization. Humans are social animals and often think and behave differently when they’re physically part of a group or reminded of their membership in a group. An effective way to keep people engaged in the long term is to weave climate change into the activities of existing social groups and networks, such as neighborhood associations, religious groups, clubs, parent–teacher associations or company departments.

Nobody likes a downer — that is why it’s better to lead with solutions, rather than the problem. This makes it easier for people to accept that climate change exists because solutions imply action and opportunity. Rather than talking about falling skies, communicators should work to build confidence that climate change can and will be addressed; highlight the benefits of taking action and align solutions with your audience’s values and priorities.

Most people have a tough time thinking about, or acting on, things and events that are perceived as far in the future, physically distant, happening to other people or involving uncertainty. To help overcome this psychological distance, the report says communicators can use vivid imagery and messages to help people identify the locally relevant, personally experienced consequences and impacts that climate change is already causing. This could mean something as simple as talking about the loss of property from intensified extreme weather events and the greater spread of infectious diseases. But tread carefully; making the issue “too real and too scary” can lead to denial of the problem.

5. Connect climate change to issues that matter to your audience

Climate communicators are more successful when they show how climate change connects to issues or concerns that their audiences care about. The most effective communicators know when and how to make use of content frames, which might highlight public health implications of climate change, the relationship between climate change and national security, or how climate change (and climate solutions) affects personal health and family well-being. For example, city leaders have found success in reframing the climate conversation to be more about resilience than climate change itself. Likewise, communicators can use structure frames to shape how an audience relates to a message by emphasizing “when,” “where” and “how many.”

6. Use images and stories to make climate change real

Making use of images that inspire and empower can be useful in attracting audiences’ attention or helping empower audiences to act. It also may help to employ cultural archetypes or icons to help audiences relate to climate change more effectively. Although data can be helpful, research shows that visualizations such as bar charts, pie charts and scatter plots are among the least memorable of all images. Rather, images of people or groups, faces and common household items are the most powerful.

It goes without saying that most Americans’ understanding of climate change is “limited.” Nevertheless, people form opinions about it based on a mental model built from a mix of associations with the phrases “global warming” or “climate change,” memories of related phenomena and past experiences, analogies they’ve heard from others, intuitive perceptions and relevant but incomplete sets of facts.

People also are reluctant to accept new information that does not confirm what they already believe, research shows. Communicators can overcome this confirmation bias by making audiences aware of the phenomenon. They can ask audiences to question themselves: “Could I possibly be wrong?” and “What would be the worst thing about being wrong?” Of course, this also can come off as incredibly pretentious, so be careful.

8. Acknowledge uncertainty, but show what you know

Acknowledging uncertainty at the beginning of a climate conversation can increase people’s willingness to engage with the issue. But be careful: people dislike uncertainty and are unlikely to support action if they believe scientific or political uncertainty makes the problem too difficult to solve. It’s best to highlight solutions that involve relatively little uncertainty, but always try to determine how your audience responds to uncertainty, as well as which uncertainties matter to them.

Skepticism is a natural part of the scientific process, but dealing with skepticism based on false information can be as frustrating as it is unproductive. Someone who questions climate change because he or she has been exposed to false information may need to be made aware that false information campaigns are going on and that they do not represent accurate science. However, communicators should avoid providing too many counter arguments to refute a myth — this can lead to overkill. It’s better to lead with the core concept you want people to grasp and use only a few of the clearest, most important facts — preferably from trusted and reputable sources.

Communicators should strive to create a decision-making environment that makes positive action easier and more automatic. Research shows that people tend to stick with the option, choice or behavior that is preselected for them or selected automatically — this is called the default effect. Communicators can make climate-friendly behavior easier for people by presenting the climate-friendly option as the default. They also can help facilitate behavior change by highlighting social norms surrounding climate-friendly behavior, when they exist. For example, in our app-crazed world it could be effective to highlight eco-friendly actions people can take using their smartphones.

Why it's (finally) time for sustainability to diversify