Climate change, water shortages and pollution pose severe risks to the $5 trillion food and agribusiness industry. Agriculture consumes 70 percent of freshwater and contributes about one-fifth of greenhouse gas emissions globally — and the sector is growing rapidly to support a population nearing 9 billion by 2050. The responsibility to balance growth with water supply and negative environmental externalities is heavy.

In its second Feeding Ourselves Thirsty report, nonprofit investor coalition Ceres found that the food sector's management of water risks improved by 10 percent on average since its last report in 2015. The packaged food and meat sectors made the biggest improvements.

The sector is still getting its feet wet, however: the average score for the largest global 42 food and agriculture companies in the report was only 31 points out of 100. Meat and agricultural producers lagged behind the packaged food and beverage industries.

Overall, "water management is an imperative for companies like never before," said Eliza Robert, a co-author of the report and lead of Ceres' agricultural water stewardship program. "As water scarcity and pollution continue to increase, corporate leaders must waterproof their business to protect and sustain water supplies."

The top-scoring brands were Nestle (82 points, up from 64 in 2015); Coca-Cola (72 points, up from 67); meat manufacturer Smithfield Foods (33 points, no change from 2015) and Olam, a newcomer to the report. "Winners" in the beverage and meat industry were unchanged, but in packaged foods and agricultural products, Nestle and Olam usurped Unilever and Bunge. 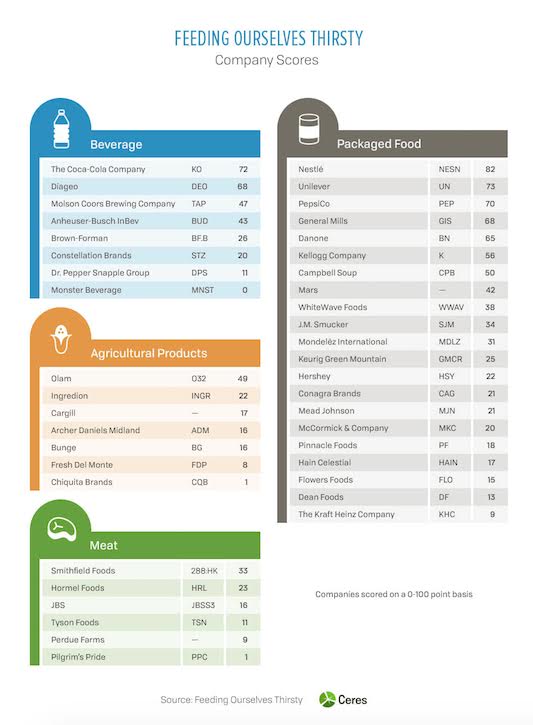 The highest scorers either improved their performance or remained the same from the last report, while rankings of some lower-performing brands dropped further. For example, Chiquita scored 20 points in 2015, but received a single point in 2017, which means it was barely disclosing any information about water risk management. Monster Beverages received zero points, down from one point in 2015.

"For these companies, there is little information available about what they are doing," said Robert. "If there's no disclosure, there's not much for us to go off." Monster Beverage did not respond to GreenBiz's calls to comment on its report rankings.

Water management is an imperative for companies like never before.

Data and disclosure help investors to forecast corporate risk exposure and companies to compare their risk management performance to their peers. Robert said that the demand for this particular report's data came from Ceres' investor network, worth trillions of dollars.

"Investors need to know that we are coming to the end of cheap, plentiful water," she said. "It will change expectations for quarter-to-quarter growth and companies need to radically rethink their water risks."

Key trends that Ceres found were improved water risk management as part of business strategy, along with water targets, accounting, risk assessment and sustainable sourcing programs. On the other hand, corporate governance and board oversight have stalled.

Water risk linked to executive compensation increased by 150 percent from 2015-2017, the report found, and board oversight of sustainability improved by 13 percent. Senior executive oversight of water risks fell by 5 percent, however, and board briefings and explicit reference to water in board charters remained a flat 0 percent.

Campbell's, Coca-Cola, Diageo and Nestle are the only four companies that hold regular briefings on water issues, where the CEO and board are informed on environmental metrics such as water usage.

Other companies, such as General Mills, performed well on some markers (it scored above 30 points on agricultural supply chain) but were knocked back by others, such as governance and management (hovering around 10 points).

Water risk linked to executive compensation increased by 150 percent from 2015-2017, the report found, and board oversight of sustainability improved by 13 percent.

On governance, however, "we may not have been clear on how we manage supply chain risks in our companies" in the publicly disclosed information on which the report was based, he said.

Hanratty said the report was an opportunity to see that the company performed well on water risk management in supply chain, but that communicating board oversight on goals and progress can distinguish the company as a leader in the agriculture and food sector.

"We need to be talking about this publicly," he said. "Big food can be a lot of good if we can be leaders in this [water] area and bring other companies along."

The Ceres report also showed that more than one-third of publicly held companies it analyzed didn't mention climate-related water risks in their most recent 10-K filings, although MSCI has found that globally, about $460 billion of revenue is at risk from lack of water availability for irrigation or animal consumption and $198 billion is at risk from changing precipitation patterns affecting crop production. 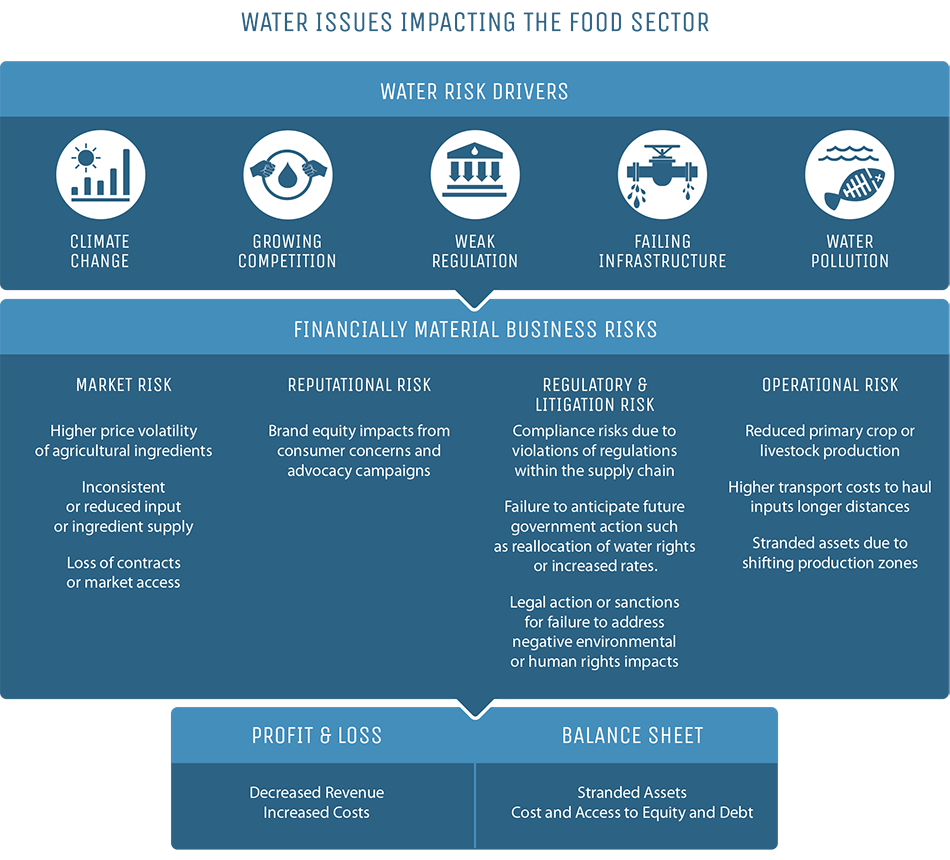 According to a study produced by MIT in July, climate change will deplete U.S. water basins and reduce irrigated crop yields by 2050. Companies are already feeling the effects of water risks.

Last summer, Tyson Foods (which scored 11 on the Ceres report) closed a meat processing plant because of diminishing production in the Southwest. And recently, Hurricane Harvey's 50 inches of rainfall damaged Texas's agricultural sector, not to mention that floodwater can contaminate food and water stocks.

In the face of this volatility, investors are taking a hard stance on companies that don't disclose their oversight of water risks. In 2016, a group of 60 institutional investors managing $2.6 trillion in assets demanded that major food and beverage companies reveal water risks and what they are doing to manage water resources.

In a statement provided to Ceres, Anne Sheehan, director of corporate governance at CalSTRS, said that large institutional investors are using risk benchmarking to reassess engagement with the low-scoring companies held in their portfolios in order to retain a competitive advantage in the market.

"There is a business case for companies managing water risk well," said Mary Beth Gallagher, executive director of the Tri-State Coalition for Responsible Investment, a coalition of 40 institutional investors with portfolio sizes ranging from $20 million to hundreds of millions of dollars. "Companies that are big users of water are more exposed. Water is a key input to ingredients, it's relevant to operations and is also a factor for the social license to operate."

Investors are taking a hard stance on companies that don't disclose their oversight of water risks.

Red flags for the organization, which is part of Ceres' investor network, include companies that lack a board member responsible for environmental, social and governance issues such as water management, or that don't set time-bound goals on water management.

However, Gallagher understands that each of these gaps arises because of the challenges that disclosure and climate action pose to corporations.

"It's becoming more common for companies and proxy statements to disclose, but there is a lack of tools and frameworks to adequately manage water risk," Gallagher said.

In order to help increase water management while ensuring successful returns, investors can help catalyze the food and agriculture sector by engaging with companies to manage their risks, and urge them to work across the sector with different stakeholders to find solutions.

"For example, we filed a shareholder proposal on water stewardship with Tyson Foods, and each year we've seen proxy results grow," she said.