Net Impact goes back to school

Thousands of students will descend on the newly renovated San Jose Convention Center for this year’s Net Impact conference, held from Oct. 24 to 26. Once again we at GreenBiz look forward to being energized by the work of these students and hear how they are tackling some of the world’s toughest social and environmental problems.

Last year, we wrote about Net Impact’s first Small Steps, Big Wins competition where undergraduate students performed relatively simple tasks to earn points and compete for prizes against other Net Impact chapters. During their beta program, 25 campuses competed. At the end of the most recent school year, students from 74 campuses completed more than 45,000 individual actions, collectively contributing more than 3,000 volunteer hours to local nonprofits, preventing more than 64,000 pounds of CO2 from entering the atmosphere, and broadly educating themselves and their peers about critical global issues.

With a goal to expand the program and grow to more than 100 campuses around the world, the Net Impact folks looked for ways to make participation easier and more fun. To accelerate this change, Net Impact formed a partnership with myActions, an organization “building the social network for the planet.”

The partnership with myActions provides Net Impact with a more robust cloud-based platform that supports online competitions as well as social and gamified elements. With the adoption of the new platform, students can "see" each other in ways they couldn’t before. For example, a quick scan of current actions shows that “Lorin H. is saving power by unplugging a game station for 10 hours” and a posted photo shows the unused controllers. Or that Claire B. is “refusing a receipt.”

Much like with Facebook, students can see a scrolling list of individual activities and in many cases a photo documenting those efforts. Others can give a student’s action a thumbs-up for being cool or can thank them for their effort. And for each action, the site shows the associated points earned by the student.

Points are important as the site has a leader board where Oklahoma State University is currently crushing the competition with more than 60,000 points (second place is our neighbor UC Berkeley with just under 53,000 points). It’s not clear if the Golden Bears can catch the Cowboys but it’s a competition where everybody wins. 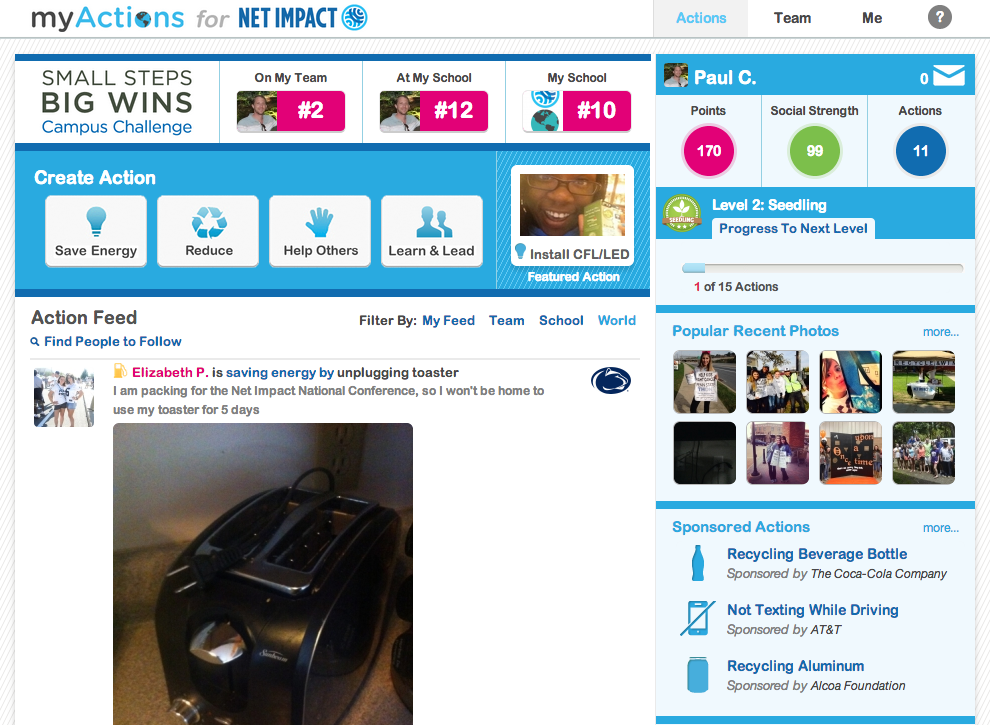 A number of major sponsors are involved in the program and while there is a philanthropic angle to their giving, they are also looking to drive behavior change. For example, the Alcoa Foundation has a goal to increase recycling rates, and AT&T wants to stop people from texting and driving.

But the major focus of the program is to engage students beyond just the local Net Impact chapter. While campuses compete against each other, it’s also possible to join campus groups such as individual dorms or clubs which can also compete for recognition while still supporting the school’s overall points total. Each student at a school can also click on another student's status to see how the small steps compare.

The coolest prize this year goes to the campus director for the university with the most points at the end of this semester. That prize is a 28-day social entrepreneurship residency with Corkscrew in the U.K. According to the company’s Web site, Corkscrew provides innovative and disruptive study-abroad programs that will change how students look at the world of business from creating startup ventures to understanding the importance of self-branding.

See you in San Jose

We’re excited to meet a new group of students this year with crazy and amazing ideas. If you’re at the conference later this month, stop us to say hello. We always like to meet the future leaders who are going to change the world.

Image of graduation cap by hxdbzxy via Shutterstock