According to a recent major United Nations report, if we are to limit temperature rise to 1.5 degrees Celsius and prevent the most catastrophic effects of climate change, we need to reduce global CO2 emissions to net zero by 2050. This means eliminating fossil fuel use fast — but to cushion that transition and offset the areas in which there is currently no replacement for combustibles, we need to actively remove CO2 from the atmosphere. Planting trees and rewilding are a large part of this solution, but we are highly likely to need further technological assistance if we are to prevent climate breakdown.

So when recent news emerged that Canadian company Carbon Engineering has harnessed some well-known chemistry to capture CO2 from the atmosphere at a cost of less than $100 a tonne, many media sources hailed the milestone as a magic bullet. Unfortunately, the big picture isn’t as simple. Truly tipping the balance from carbon source to carbon sink is a delicate business, and our view is that the energy costs involved and likely downstream uses of captured CO2 mean that Carbon Engineering’s "bullet" is anything but magic.

Given that CO2 only accounts for 0.04 percent of the molecules in our air, capturing it might seem a technological marvel. But chemists have been doing it on small scales since the 18th century, and it can even be done — albeit inefficiently — with supplies from the local hardware store.

As secondary school chemistry students will know, CO2 reacts with limewater (calcium hydroxide solution) to give milky-white insoluble calcium carbonate. Other hydroxides capture CO2 in the same way. Lithium hydroxide was the basis of the CO2 absorbers that kept the astronauts on Apollo 13 alive, and potassium hydroxide captures CO2 so efficiently that it can be used to measure the carbon content of a combusted substance. The 19th-century apparatus used in this latter procedure still features on the American Chemical Society’s logo.

Unfortunately, this isn’t a small-scale problem anymore — we need to capture billions of tonnes of CO2, and fast. 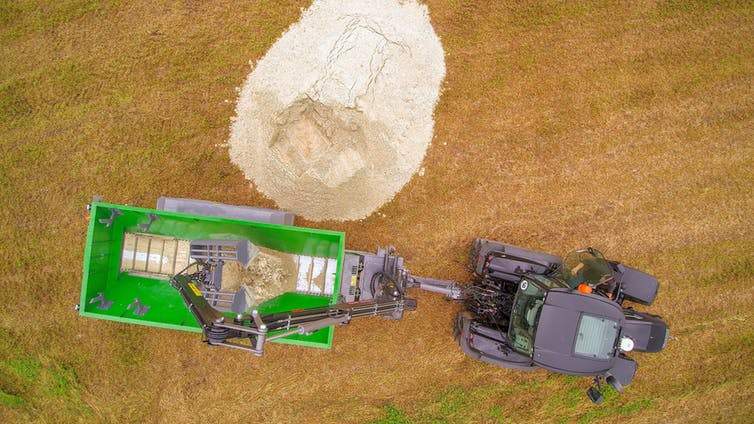 ShutterstockNordic Moonlight
Calcium carbonate can be used as a soil fertilizer.

This part of the process costs relatively little energy and its product is essentially limestone — but making mountains of calcium carbonate doesn’t solve our problem. Although calcium carbonate has uses in agriculture and construction, this process would be far too expensive as a commercial source. It also isn’t a practical option for government-funded carbon storage due to the massive quantities of calcium hydroxide that would be required. To be feasible, direct air capture needs to produce concentrated CO2 as its product, which either can be safely stored or put to use.

Thus, the solid calcium carbonate is heated to 900 degrees C to recover pure CO2. This last step requires a vast amount of energy. In Carbon Engineering’s natural gas-fired plant, the whole cycle generates half a tonne of CO2 for every tonne captured from air. The plant does capture this extra CO2, and of course could be powered by renewable energy for a healthier carbon balance — but the problem of what to do with all the captured gas remains.

Swiss start-up company Climeworks is using similarly captured CO2 to aid photosynthesis and improve crop yield in nearby greenhouses, but as yet the price is nowhere near competitive. CO2 can be sourced elsewhere for as little as one-tenth of Carbon Engineering’s $100 bottom line. There are also much cheaper ways for governments to offset emissions: It is far easier to capture CO2 at the emission source, where the concentration is much higher. So this technology is likely to mainly interest high-emitting industries which may stand to benefit from CO2 with green credentials.

Including the energy cost of transporting and refining this extra oil, using the technology in this way likely will increase net emissions, not decrease them.

For example, a key investor in Carbon Engineering’s capture technology is Occidental Petroleum, a major user of enhanced oil recovery methods. In one such method, CO2 is pumped into oil wells to increase the amount of crude oil that can be recovered, thanks to increased well pressure and/or improving the flow characteristics of the oil itself. However, including the energy cost of transporting and refining this extra oil, using the technology in this way will likely will increase net emissions, not decrease them.

Another key spoke of Carbon Engineering’s operations is its Air To Fuels technology, in which CO2 is converted into combustible liquid fuel, ready to be burned again. Theoretically, this provides a carbon-neutral fuel cycle, provided that each step of the process is powered with renewable energy. However, even this use is still a far cry from a negative emissions technology.

Promising alternatives are on the horizon. Metal-organic frameworks are sponge-like solids that squeeze the equivalent CO2 surface area of a football pitch into the size of a sugar cube. Using these surfaces for CO2 capture requires far less energy — and companies have started exploring their commercial potential. However, large-scale production has not been perfected, and questions over their long-term stability for sustained CO2 capture projects mean that their high cost is not yet merited.

With little chance that technologies still in the laboratory will be ready for gigatonne-scale capture within the next decade, the methods employed by Carbon Engineering and Climeworks are the best we currently have. It’s important to remember that they’re nowhere near perfect. We will need to switch to more efficient methods of CO2 capture as soon as we are able. As Carbon Engineering founder David Keith himself points out, carbon removal technologies are overhyped by policymakers, and have received "extraordinarily little" research funding thus far.

More generally, we must resist the temptation to see direct air capture as a magic bullet that saves us from having to address our carbon addiction. Reducing or neutralizing the carbon burden in the life cycle of hydrocarbon fuels may be a step towards negative emissions technologies. But it is just that — a step. After being on the wrong side of the carbon ledger for so long, it’s past time to look beyond just breaking even.

The sensible, sexy and strange world of carbontech

This testbed in Iceland sucks carbon dioxide out of the air