New Slow City: Is this the future of Big Apple living?

Here's what it takes to escape from the New York rat race: Start with a technology fast, a micro apartment and a 20-hour work week.

This is an excerpt from the book New Slow City.

Burned-out after years of doing development and conservation work around the world, William Powers decided to see if the increasingly popular "slowliving" approach was possible in one of the most frantic, most overworked, most expensive cities in the world: New York City.

Just one year after spending a season seeking a sustainable lifestyle in a tiny 12-foot-by-12-foot cabin off the grid in North Carolina, Powers and his wife chucked 80 percent of their stuff, left their spacious Queens townhouse and moved into a 350-square-foot “micro apartment” in Greenwich Village. Committing to a 20-hour workweek, Powers explored the viability of Slow Food and Slow Money, technology fasts and urban sanctuaries. Along the way, he met New Yorkers also attempting to resist the culture of "Total Work."

On a routine impromptu afternoon, I dip into a sustainable cities panel at Columbia University. Architects and landscape planners imagine aloud a New York that combines the texture of the past with green technology and “permaculture” (a contraction of both permanent agriculture and permanent culture), so that Manhattan’s concrete boundaries are replaced by wetlands and beaches for bird watching, riverside strolls, and sunbathing.

“It’s not just an aesthetic win,” one of the panelists declares. “Renaturing the city’s edge will protect it from climate change–induced ‘storm surges’ that could flood us out.”

Another panelist explains that, two years back, the top federal team of climatologists and engineers on emergency preparedness informed Mayor Bloomberg that the city must protect itself from these potential “storm surges,” and they recommended the construction of dikes off New York Harbor. The price tag for that massive project: $100 billion (money the city doesn’t have). Its timeframe: decades (time the city doesn’t have).

But for about a tenth of the cost and the time, New York could let its banks go pleasantly funky, and should the waters rise, those green spaces would absorb much of the flooding, sparing buildings and subways. The panelist shows a rendering of what it would look like. The image fascinates me.

Back at the apartment, I sketch a version of it with Melissa’s colored pencils and tack it above our fireplace. When Melissa comes home that night, she studies it. 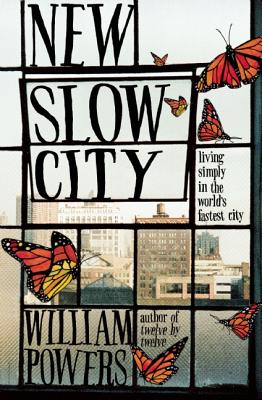 “Cool,” she says, “but there’s something else, something that’s already here in Manhattan today.” Out the window our tree scratches a branch against the fire escape; its leaves sweep the bedroom window. “It’s part of how I find sanity in Manhattan: urban sanctuaries.”

Fireworks flash and gongs sound. Urban sanctuary! This is a Slow City tool Melissa and I have both been using but didn’t have the words for yet. While making dinner, we list our favorite urban sanctuaries. She gushes about Central Park’s Ramble — with its circuitous paths looping down past waterfalls and pine groves — and the Tudor City gardens perched above First Avenue and 40th Street, an oasis to which she flees from her Midtown office to eat brown-bag lunches amid birdsong.

My favorite sanctuaries: Pier 45’s tip, where the West Side Highway fades to a hum; a back seat in the cathedral of St. John the Divine in late afternoon; the High Line, a new park sanctuary created from unused urban infrastructure; a silent, little-touristed third-floor corner of the Met reached via a concealed stairway in the Asian wing (it houses imaginative Chinese decorative arts).

Moongazing on Tar Beach after dinner, we muse on two other urban sanctuaries: Washington Square and Madison Square Parks on warm days, when we love to kick off sandals and lie back to savor that sensual press of our bodies to the Earth. Gravity’s eros. I can feel that attraction now — and it’s mutual, since our bodies exert a tiny gravity on the Earth — as my wife and I touch hands, the Milky Way invisible against Manhattan’s illumination, with only Venus, the moon, and a handful of stars perforating through.

I breathe deeply, remembering a new term my friend, the cultural ecologist David Abram, coined in his book “Becoming Animal: An Earthly Cosmology.” The word suggests that air isn’t above the Earth, as we normally imagine, but inherent to it. “We live in the Earth — or the Eairth — not on it,” he told me once. The atmosphere around us is an ever-accessible urban sanctuary.

So is water. One Saturday afternoon, Melissa spots a sign along the Hudson bike path: “Free Kayaking.” An arrow points up Pier 40, and we follow it. There’s no catch. The nonprofit, all-volunteer Downtown Boathouse offers open-topped, double and single kayaks for nothing on weekends and Wednesday afternoons.

We pull on life jackets, hop into two singles, and paddle through a delineated square of the river. As the kayak skims the glassy surface, droplets cool my forearms, and the lapping sound calms me. We stop to rest where a half dozen private sailboats are moored, imagining the navy-blue, 32-footer beside us is ours.

“Manhattan!” I exclaim. “Five days sail from Nova Scotia,” Melissa says, “and now for some good food at last.”

Leaning back in the kayaks, feet dangling into the water, we look up into the Eairth’s blue and riff for a quarter hour on the adventures in “our” navy-blue sailboat. Momentarily, other adventures we’ve been talking about bubble up in my mind — a niggling sense of greater obligations within our marriage looming on the horizon — but I don’t let these thoughts pierce the lightness of our joint daydream.

Our spontaneous boating fantasy heightens the sense of urban sanctuary. My body softens and my psyche de-stresses. When we eventually paddle back to the dock, our shorts are soaked and we’re fully refreshed for asphalt reentry.

“How can this be free?” I ask a volunteer, who tells me it’s part of the Downtown Boathouse mission to “create a constituency around kayaking that will one day force the city to renature Manhattan’s boundaries for kayaking. ... Now we only have access in this little square of water, and most of the city’s edges are concrete, and there’s no banks to launch a kayak from. So I guess we’re a bunch of aquatic subversives.”

It seems a long way from my soaked shorts to this vision. Nevertheless, the experience gets me dreaming, and back at the micro, I add a dozen colorful kayaks into the downtown marshes on the Natural City drawing.

The following slow Tuesday, I awake, descend the five flights, whistle my way through the courtyard and horse entrance, view the day’s catch with Juan outside Pearl Oyster Bar and then tote a still-warm Tuscan loaf from Amy’s Bread to one of my favorite New York urban sanctuaries: St. Luke’s Gardens on Hudson Street.

This alcove, a few blocks from Cornelia, harbors a hundred varieties of trees, shrubs, and flowers amid pleasantly circular paths and a scattering of benches. It’s no Yellowstone — more the size of a suburban backyard — but St. Luke’s is open to the public and little trod. I read Bashō’s haikus, munch warm bread, and watch a dozen starlings gather breakfast.

A few people hasten by, using the garden as a shortcut between appointments, but otherwise I’m alone. Before long, however, St. Luke’s overripens with the growing noise of grinding bus brakes and whining Hudson River tourist helicopters. Townhouse backsides and the hulking seven-story apartment building on Greenwich Street thrust into the gardens. Lest one forget the “urban” in this sanctuary.

Knowing it’s time for a switch-up, I amble to Prodigy Coffee, fixing half my attention three stories up in the Eairth. Pigeon flocks do their double-helix trick. Rainbow prisms enliven an ancient chandelier in someone’s living room. I enter Prodigy to the tart scent of ground espresso and the hiss of foaming milk. I order a cappuccino — the barista knows I take it “dry and extra hot” — and sink into my bay-window seat up front.

I tuck into the marvelous foam and gaze out across the street where Unoppressive, Non-Imperialist Bargain Books (yes, that’s its name) nudges into Wisdom of Tibet: Spiritual Goods. In the Village, it seems, politics lies south of religion, and both take plastic.

I feel blessed. Before I got up this morning, Melissa had already hand-drawn a birthday card for my mother. Then she came into the bed to cuddle, and I’m sipping into those cuddles now. We both recognize our overall happiness has increased since the move to Manhattan. Beyond the pleasure of staycations, kayaking, and Little Liberia, the very act of dreaming up a fresh vision for our life and implementing it together creates a bond. Yet right now a streak of guilt washes through my joy, guilt over getting to do so much of nothing so often while she works.

That guilt is mixed with a touch of loneliness; my stepping into five-day weekends leaves me alone a lot of the time ... and out of sync with Melissa. Whether it’s eating scallops alone or idling in Prodigy, I feel isolated. I’m finding it hard to stake out a claim to stillness — if just for a few hours a day — in a place where everything always moves. 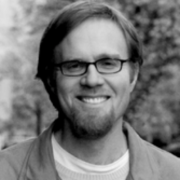 See all by William Powers