New world companies and the Paris Accord

The following is an excerpt from the book "New World Companies: The Future of Capitalism."

Is it possible to identify and isolate a set of core principles that demonstrate how companies incorporate socially responsive practices into their operation as they compete in an increasingly uncertain global business environment? Is it possible to tie these principles directly to quantifiable measures of stock and societal value?

I have asked myself these questions for several years, with a bright team of senior associates. It took society about 30 years to gain the momentum to pass the Paris Climate Accord — an international agreement of goals and frameworks. Yet the march for solutions and innovations of substance have begun in earnest.

The Paris Accord redefines capitalism

First, we must note how the Accord fits a tradition of social contracts, not legal requirements. Within the Paris Accord, there rests a new social force seeking "quantifiable measures" to the issue of carbon and innovation that involves many social institutions — from banks and corporations, to investors and the realm of science and technical innovation.

This "social contract" is parallel in consequence to when John Locke wrote his Second Treatise on Government. That work essentially unleashed over time the understanding of private property across a developing world. In contrast, this Accord, the product of tens of thousands of leaders, will define capitalism anew to a developed and industrialized world. 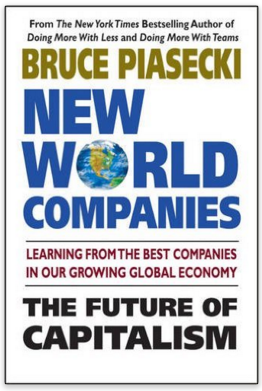 These measures, felt by every firm and every investor, will shape the future of capitalism in a swift and recognizable pattern than ever witnessed before. For in this brave new world of social disclosure, the winners will be those that gain measureable efficiencies before the losers. This is the century where the money flow of the world is increasingly measured by price, quality and results in terms of social needs regarding rising waters and the demands for wide-scale sources of reliable, cheap, cleaner energy.

By "quantifiable measures," I am referring to areas such as increased revenues and profits, improved efficiency and an expanded global customer base. Those that learn the best ways to respond to the demands of the Accord will be gaining in value, substantially. These measures, however, are not limited to short term financial performance. The new Paris Climate Accord offers a route to compounding sustained value in a stock and in a firm’s strategy.

ESG is the new shared language of the global accord

This "social agreement," this framing of shared goals, has come about with the development of environmental, social and governance (ESG) metrics. None of this would have been possible before the current globalization of IT capabilities and the currency of banks and investors to track disclosures instantly and globally. These measures or criteria have become the basis of an expanded way of understanding and evaluating the principles, practices and performance of corporations.

Our first key findings: ESG has become the language shared by all nations in answer to the Accord. "ESG metrics," not national rules and regulation, are the global language of this Accord. The framework is objective-based and goal-oriented. It is centered on social expectations and core industrial needs for superior IT, heightened efficiencies and a supply of talent and innovation.

Environmental, social and governance (ESG) metrics, not national rules and regulation, are the global language of this Accord.

The way in which a corporation responds in three areas – environmental concerns, social issues that affect people throughout the world and the quality and integrity of its governance team – is becoming more and more important.

That is the core purpose within the Paris Accord — a social focus on capitalism itself.

The significance of the Paris Accord will see the focus on corporate performance through an ESG lens, with these principles peaking in the next 20 to 30 years. As the accord matures every five years, the world of finance will sharpen along these ESG lines.

Since 1981, more than 60 percent of Fortune 500 companies have either gone out of business or have been significantly downgraded in size, influence or governance structures. Many have had to sell off parts of their businesses, which in some cases, were the very brand on which they had built their success.

The fact that the majority of these once vibrant Fortune 500 companies have lost so much ground clearly demonstrates that the critical elements of "social response capitalism" impact the people who work for and patronize these companies. The overwhelming reason that these corporations fail is because they did not adapt to the global corporate culture that was becoming more aligned with ESG principles and practices.

How could we ever keep up with all these shifts in corporate purpose?

The world on your wrist

With its 2015 debut, the Apple Watch gave us a new and innovative way to keep in touch with the world. Beyond giving people everywhere the ability to simply communicate with others, Apple has provided them with the opportunity to wear "their world on their wrist."

Digital technology allows us to personalize our worlds in ways that hadn’t been possible just two decades ago. Yet it will also prove the main path to heightened efficiency to answer the new demands of the Paris Accord. We need look no further than our wrists to send messages to the principals of companies on which the success of our 401(k) depends. These innovations have brought in the "new world companies" like Flex, FedEx and Toyota.

In the coming years, the Apple Watch and other such devices are likely to gain widespread favor of the relentless push toward globalization that has followed in the wake of rapid evolution of digital technology. This trend has led toward the realization that ESG metrics or measurements are among the major keys to global corporate success. As this becomes even clearer in the coming years, after the Paris Climate Accord, wearing part of how each fit in the puzzling complexities of reducing carbon impacts.

Global corporations spread the message of environmental, social and governance responsibility around the globe, regardless of the countries with which they are dealing.

Globalism, on the other hand, is characterized by a company’s adoption of ESG values that remain consistent in all of the countries in which they do business. Global corporations spread the message of environmental, social and governance responsibility around the globe, regardless of the countries with which they are dealing. These are the firms that will thrive as the accord defines competition in a carbon- and capital-constrained world.

Enhanced globalization is a direct result of our ability to exchange information. It means that consumers are becoming increasingly more knowledgeable, sophisticated and particular about the products they buy. Cost may no longer be the single most important reason for purchasing the product of one company over another’s. Today, information on the companies themselves — the quality of their products and services, their social contributions, ethics and environmental concerns — disseminated through blogs and online reviews, now have great impact on a person’s buying decisions. This profound global phenomenon is a key factor in the emergence of new world companies.

As a young family member once told me, "My generation doesn’t care about the politics of nothing. We want things that work well and work fast. We see a universe of exchange before us, not the walls and wars of past nation-states."

During the 1990s, the Internet — and the instantaneous global communications that came along for the ride — put swiftness into globalization, moving us rapidly toward the world of "things that work well and work fast." This began significant social process of confirming that the profit-is-the-only-thing-that-matters worldview was too out-of-date to survive much longer.

In the wake of this technological explosion, at roughly the same time Apple released its revolutionary watch, it reported the largest net income of any public company in the history of mankind. You can see this pattern of sustained growth in most new world companies, as they center their strategy on responding to the core social urgencies of global access, heightened ESG disclosure and competitive efficiencies.

To date, this computer and communications pioneer has sold more than a billion iPhones, iPads and iPods since it launched the product lines less than a decade ago. What is next?

Can sustainable companies get a lower cost of capital?

Intel and Nike use this investor engagement tactic most companies overlook