NGOs alone will not turn the tide on ocean trash

A key focus of next week’s United Nation’s Ocean Conference, which will bring together up to 10,000 people from countries around the world, will be the crisis of trash and plastic polluting our ocean. Volunteers from over 100 of those countries are critical contributors to the 2016 International Coastal Cleanup report being released on World Environment Day as a reminder that global action is alive and a vital part of the solutions we seek.

Let’s take a moment to celebrate that in 2016, more than a half a million people removed over 18 million pounds from almost 15,000 miles of coasts, beaches and waterways.

Yet the reality is that cleanups alone cannot stem the tide of an estimated 8 million metric tons of plastic waste that flows into our ocean every year. That’s the equivalent of one garbage truck dumping a full load of plastic into the ocean every minute.

That is a future that no one wants.

In 2016, more than a half a million people removed over 18 million pounds from almost 15,000 miles of coasts, beaches and waterways.

The numbers are not encouraging

In her groundbreaking research, Jenna Jambeck and her Jambeck Research Group colleagues found that 80 percent of the plastic in the ocean comes from land. Most is garbage that is never collected or leaks out of the system once collected. In many places, this leads to uncontrolled dumping or open burning of waste. That leads to more trash in our ocean, dangerous emissions, flooded waterways and the spread of disease. Even in countries with high collection rates and excellent waste management systems, trash can lead to pollution and resources are being squandered.

Clearly, we need to turn take action but where and how?

There is no simple answer. NGOs — even those focused on ocean conservation — can raise awareness but cannot singlehandedly turn the tide on ocean trash. Ocean Conservancy believes that the only viable path is for all of us to work simultaneously and cooperatively across multiple fronts. We need the reach of consumer brands, the innovation of plastic producers, the advocacy efforts of conservation groups and world-class research by scientists to truly make progress.

The Trash Free Seas Alliance seeks to engage the private sector in solving the problem of ocean plastic. We are working with governments to support innovative, locally appropriate waste management systems that ensure materials such as plastics are retained and recovered for other uses or proper disposal, and never find their way into the ocean. The collective commitments being made next week at the U.N. Ocean Conference by the Alliance are staggering. At least $10 million will go toward:

Making the pieces fit requires coordination, is worth the effort

Coalitions create powerful synergies. Scientific innovation directed toward creating materials that are easier to recycle or products that reuse plastics found on beaches will complement governments creating incentives for companies and consumers to ensure those products stay in the system, which could lead to companies investing in solutions that support collection and recycling systems and more volunteers rallying their communities to clean up and divert waste from landfills.

Coalitions also create amplification. When advocates from different sectors — the unlikely bedfellows — all ask for the same thing, influencers takes note; decision-makers pay attention. Today, we are seeing marine plastics, waste reduction and waste management being discussed at high-level fora such as the United Nations, the G20 and the Asia Pacific Economic Cooperation forum, potentially unlocking billions of dollars of development capital. Countries such as Indonesia and Belgium are leading the way with their own marine debris action plans.

Ocean Conservancy believes that today, more than any other time in the past, the world is primed and ready to take on the challenge of ocean trash. We support efforts to reduce plastics that go into the waste stream. We see value in improving the collection and containment of plastic waste. We welcome and encourage volunteer action to remove trash from our beaches and coastlines. We are ready to work with those who want to be part of the solution.

This is our time to make a lasting impact. Let’s turn the tide on trash together. 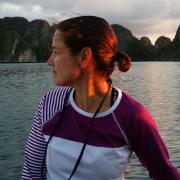 See all by Susan Ruffo