A company's journey to sustainability is always going to be -- cliché alert! -- a marathon and not a sprint.

Just ask Nike. The company is a leader in environmental design, and yet it has a long way to go to reach its sustainability goals.

At least Nike knows where it's headed. It has a bold long term called the North Star. A key tool is known as Considered Design, where the goal is to

design products that are fully closed loop: produced using the fewest possible materials and designed for easy disassembly, while allowing them to be recycled into new product or safely returned to nature at the end of their life.

This is a big, radical, inspiring idea. Here's a cool video, just a minute long, about Considered Design:

I run marathons, so I know that you need to take a lot of steps to reach your goal. Recently, I sat down with Lorrie Vogel, the general manager of Considered Design, to learn more about what steps Nike has taken, and what's left to do, after hearing her excellent presentation at the State of Green Business Forum in Chicago.

"Our designers are the innovators in the company," Lorrie says. "They can have the largest impact downstream." She's a former designer and, like most people who work at Nike, an athlete. "The competition is fierce" among design groups to achieve gold, silver and bronze scores that depend on their environmental performance, she says.

What's more, unlike some companies, Nike isn't designing one line of products to be sustainable or green, and then leaving the rest alone. It's applying a single set of design metrics to shoes, apparel and equipment and measuring its progress.

"For us," she says, "it's about creating closed-loop products."

Some of these closed loop products have generated lots of attention. Nine Nike-sponsored teams in last year's World Cup wore these shirts, which are made from recycled plastic bottles. 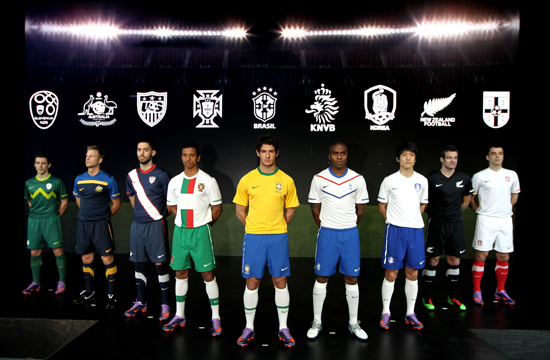 Other Considered products are released quietly. A Nike running shoe called the Dart VII uses "recycled materials throughout," according to Nike's Considered website, but you have to look hard to discover that.

Sustainability is almost never part of Nike's marketing. Instead, the company talks about performance and innovation -- which, obviously, matter more to its customers.

What this means, though, is that the company is missing opportunities to let consumers either (a) express a preference for "greener" product, unlikely as that may be or (b) recycle their old shoes, which is more likely. (People who love sports tend to care about the outdoors.)

Without changing consumer behavior -- i.e., getting people to recycle, rather than throw away old shoes -- Nike has no hope of making its closed-look vision a reality.

For now, it's impossible to know what percentage of the company's shoes are being recycled. Nike takes back defective returns, counterfeits and post-consumer shoes and turns them into Nike Grind, a material used to resurface playing fields. It says here in Nike's 2009 sustainability report hat

Since Reuse-A-Shoe was established in 1990, we have recycled more than 23 million pairs of shoes and contributed to 320 sport surfaces.

That sounds impressive until you realize that Nike, which generated nearly $20 billion in revenue last year, must sell, at minimum, tens of millions shoes every year. I'm guessing because Nike won't offer even a rough estimate of how many shoes it sells. So we don't know if 1 or 2 or 5 percent of the shoes are coming back to be made into something else.

Just for fun, I went to Nike's Reuse A Shoe website to find out where I could bring back my old running shoes. My best option is a Nike store that's 22 miles away in Leesburg, Va. Maybe Nike could get together with other shoe companies and major retailers to encourage and sponsor recycling wherever running shoes are sold. Better yet, runners who brought back their shoes could be rewarded with a premium -- like a $1 gel or a $1 off a pair of socks.

To be fair, the sustainability report says:

We are seeking ways to improve the viability of recycling used and defective shoes. The volume of processing is limited and the cost of collection and shipping can be high. We are exploring new partnerships and technologies that will make the process more efficient.

But I don't see any evidence of new approaches, and Nike spokeswoman wouldn't elaborate.

AIncremental changes won't get us where we need to go, as Nike well knows. A bold vision needs to be backed with with bold action.