As more of its best-selling LEAF electric cars roll onto roads each year, Nissan's vision for the next wave of electric vehicle (EV) development is not exactly lacking in ambition.

Not only is the company readying an updated version of the LEAF for sale next year that drastically will increase its range, but it is also plotting a decade-long expansion of its green mobility business to include electricity grid stability services and home battery storage. The stated end goal is nothing less than transforming modern life for millions of people around the world. Given the LEAF's early success and the disruptive potential offered by falling storage costs and smart grid technologies, the company's predictions do not feel as hyperbolic as they would have done just a few years ago.

Setting out its vision to create an EV "ecosystem" across Europe, this week Nissan issued a flurry of announcements, including the launch of a new version of its e-NV200 electric van and the unveiling of plans for an enhanced range of home charging units.

With a view to significantly upscaling its electric mobility offering, the Japanese carmaker also said it plans to expand its European fast-charging network, and revealed it soon will begin offering its fleet customers bi-directional charging technology allowing drivers to sell electricity from their vehicle batteries back to the grid. It is functionality that EV advocates hope will further strengthen the financial case for companies to switch to electric fleets, as the ability to sell power to grid operators during peak periods will add a further revenue stream to EVs that already promise to slash fuel and maintenance costs.

The goal is clear: to entrench Nissan's first-mover advantage.

The announcements came at the European premiere of Nissan's new electric LEAF in Oslo, where a limited "2.ZERO" edition of the passenger car with a range of enhanced features was unveiled ahead of its officially going on sale in January. First announced last month, the new LEAF can travel 235 miles on a single charge, marking a 50 percent improvement on its predecessor.

Paul Willcox, chairman of Nissan Europe, said the company had sold more electric vehicles than any other manufacturer worldwide over the past 10 years and was looking to expand its EV offering.

"Now, we're outlining our plans for the next decade, which will see even bigger investments in infrastructure, new battery advances and will even change the way people access and pay for the power in their cars," he explained.

The goal is clear: to entrench Nissan's first-mover advantage at a time when virtually every other auto manufacturer is coming forward with plans to expand its EV offering and provide new "smart mobility" services.

Tapping into growing demand from corporate fleets for ultra-low emission vehicles looks to be a key part of the new strategy, as evidenced by the upgrades to Nissan's electric van. First launched in 2010, Nissan's original 100 percent electric e-NV200 is Europe's best-selling e-van, despite a relatively short range. The recently announced updated version will be capable of traveling 60 percent further — an additional 62 miles — on a single charge, the firm said. It means the e-van will have a total range of 174 miles on a single charge, but without compromising on load space, as there will be no increase in the size and weight of the new 40kW battery, it added. The van will be available to order from the end of 2017.

Gareth Dunsmore, EV director at Nissan Europe, said the cargo capacity and longer range of the e-NB200 made it "the perfect last mile delivery solution for urban deliveries and collections."

"Given the huge impact that business deliveries/collections and professional drivers have on air quality and traffic congestion, especially in city centers, helping cut the level of CO2 emissions they create is a vital part of creating a more sustainable future," he explained.

The carmaker also has committed to expanding its existing outdoor fast-charging network by 20 percent over the next 18 months, working with EV fast-charging standard CHAdeMO to add 1,000 more charge points to its existing 4,600 chargers across the continent.

The public charge points will be bolstered by a Nissan's new range of home and office charging and storage units, announced Oct. 2 ahead of a 2018 launch. The new range includes a double speed 7kW home charger that will allow Nissan EV owners to fully power up in 5.5 hours — a 70 percent reduction in charging time from its previous technology, the firm claims. The super-fast 22kW office charger, meanwhile, will enable fleet and business owners to charge up in just two hours. 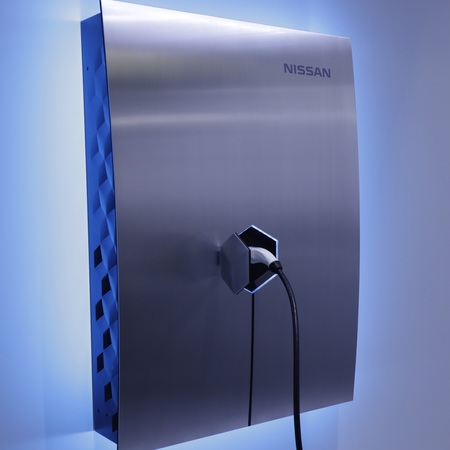 Elsewhere, Nissan showcased its new home energy storage system for EV owners, which will enable drivers to power up their vehicles and store energy in order to better manage home electricity costs. The company hopes to sell 100,000 units in Europe before the end of 2020, following the success of its existing xStorage solution, developed in partnership with U.K. battery developer Eaton.

And, seeking to capitalize on the move towards greater decentralization of power grids as more renewable sources of energy come online, the carmaker revealed it has been testing "revolutionary" bi-directional EV charging technology over the past year that soon will be available to its fleet customers in Denmark, before potentially being expanded to elsewhere in Europe in the coming years.

The vehicle-to-grid (V2G) technology will enable Nissan customers to draw energy from the grid to power their car or van and then "sell" electricity back to the grid for others to use. Once a business has paid a nominal charge for the installation of a V2G charger, Nissan said, there are no fuel or energy costs, meaning free power for EVs.

In collaboration with energy supplier OVO Energy, Nissan customers also will be able to purchase an xStorage home energy unit at a discounted price in order to "sell" power back to the grid. "This helps contribute to grid stability in a world where demand for energy is increasing due to a growing, urbanizing population," the carmaker said in a statement. "It can result in an additional expected income for users averaging (about $463) per year."

Step by step, we are removing any barriers to electric vehicle adoption — from infrastructure investment to how people access the power itself.

Willcox said the announcements were part of Nissan's vision for an EV "ecosystem" that would help ensure lower emissions travel and cleaner air in cities.

"Step by step, we are removing any barriers to electric vehicle adoption — from infrastructure investment, to how people access the power itself," he said. "Over the coming decades through our Nissan Intelligent Mobility vision, the electric ecosystem will transform modern life as we know it. But while the starting point for it is 100 percent electric vehicles like the new LEAF and e-NV200, the impact goes much further."

While Nissan has led the field on EVs since the release of its best-selling LEAF in 2010, the carmaker is already preparing for the second decade of its electric mobility business in a vastly expanded and rapidly evolving marketplace. In order to maintain its leadership position, Nissan certainly will face significantly more competition than it has seen over the past seven years — numerous high-profile rivals, including Tesla, Volvo, Toyota, Ford and VW, are all competitors in the global EV market. But by using the LEAF as a route into the nascent storage and vehicle to grid technology market, the company clearly thinks it remains well placed to prosper from a major sea change in both its own business and the wider road transport sector in the years to come.

The LEAF's success could prove to be just the first chapter in a long journey of corporate and technological transformation.

Coronavirus could trigger 'largest ever annual fall in CO2' in 2020