No more BS: All the headlines from Climate Week New York

No more bullsh*t, it's time to deliver, as your stereotypical New Yorker might say.

That was the message from the One Planet Summit in New York this week, a high profile high powered retort to those who think the Paris Agreement is dead.

French President Emmanuel Macron used the word in his off-the-cuff closing address, where he let rip at a culture of greenwashing among business and government. A bit rich, perhaps, given greenhouse gas emissions in France hardly have collapsed under his watch.

But it resonated around the meeting. Donald Trump-plain speak appears to be catching.

This year's New York Climate Week has — I'd suggest — been a bit of a reality check on where we are. The science isn't good, as the murmurings from the upcoming IPCC 1.5C report tell us. The world is running out of bandwidth to prevent dangerous levels of global warming. The politics are tough. The United States is still in the Paris Agreement — it's still serving its notice — but to all intents it has disengaged, leaving a power vacuum.

The United States is still in the Paris Agreement — it's still serving its notice — but to all intents it has disengaged, leaving a power vacuum.

So far no one significant has stepped up. Antonio Guterres' speech two weeks ago was an effort to spark leadership, but that will take time. Time is not what we have. 2020 has been designated the key year for all countries to step up with new climate targets.

With no clear offer for 2020, the EU is in no position to pretend it's a leader.

China is working on its 2020 offer, and despite reports of a coal expansion, it's still within the envelope of its 2030 pledge and conceivably could offer a more ambitious package.

But then again, there's the added risk that the fast-growing trade war with the United States could encourage Beijing to help boost growth by upping support for domestic manufacturers and curbing its war on air pollution. Both moves would be bad news for the climate.

However, at the same time there has been good news.

U.K. prime minister Theresa May cut an unusually relaxed figure in New York and reiterated her pledge to put the country on the pathway to a mid-century zero emissions endgame. On Thursday the U.K. joined the Carbon Neutrality Coalition — now a group of 19 countries including New Zealand, Sweden, Germany, France and Canada that promise to crank up their targets.

The coalition's workplan seems pretty clear. It will take "into account the conclusions of the upcoming IPCC special report on global warming of 1.5 (degrees Celsius) which is expected to highlight the need for urgent global action. Under the Plan of Action, coalition members commit to develop and share their long-term low emissions development strategies before 2020."

Earlier in the week, Fiji and the Marshall Islands became the first world leaders to outline plans for new, upgraded climate targets for 2020 in line with the 2015 Paris Agreement. Now, we know carbon cuts from these two small island states won't make a huge difference to overall global emissions, but it does send a political message.

While there is certainly pride attached in being amongst the first, in the end, this isn't a race against each other, it's a race against time. And time is running out.

"While there is certainly pride attached in being amongst the first, in the end, this isn't a race against each other, it's a race against time," said Fiji's PM Frank Bainimarama. "And time is running out. Only when many others, including much larger emitters, join us in committing to strengthened targets will we tip the scales back in the planet's favor."

Fink predicted climate-directed investments will hit the "trillions" of dollars provided there's enough data out there for investors to feel confident. "We're seeing a real change — it's just beginning," he said.

Bank of England governor Mark Carney riffed off this in his intervention. Climate is moving to the mainstream of finance "quickly," he said. In the future, "companies will be disclosing or hiding."

Carney was speaking off the back of the launch of the Task Force on Climate Related Disclosures (TCFD) latest progress report. Around $100 trillion of assets are behind the TCFD guidelines, said Carney, along with eight of the largest 10 fund managers.

We know none of this is happening fast enough. And we know that for all Fink's big projections, Blackrock still holds nearly $2 billion of fossil fuel assets. The culture of greenwashing — as Macron observed — will take a while to ditch.

But there is a shift, and while Trump was sinking deeper into the mire of the Brett Kavanaugh Supreme Court nomination fight, other world leaders were looking to a cleaner, brighter future.

The question for many campaigners and sustainability leaders in New York — as ever — is if a low carbon future makes sense, why aren't more companies and countries doing more?

Perhaps the answer to that is that they're all looking for a leader.

They're all looking for the lodestar we thought was Paris, that perhaps still is Paris, but is in need of an injection of political capital.

The United Kingdom is playing a role out here — it's still widely respected as a climate leader — but the vacuum left by the United States is big, and it will require new, progressive coalition to fill it in Katowice. 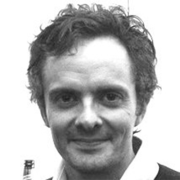 See all by Ed King