Not pulp fiction: Absolut, Coca-Cola and the paper bottle project

The two brands are part of a ‘pioneer community’ that also includes Carlsberg and L’Oreal.

Product development teams at all four companies are part of a "pioneer community" brought together and coordinated by an aptly named startup Paboco, shorthand for "paper bottle company." Together, they are working on prototypes of bio-based containers of varying shapes and sizes that use wood fiber, rather than glass or some form of fabric, to hold anything from lotions to carbonated beverages (a particularly thorny challenge).

Carlsberg, which got into the project more than four years ago, already has shown off two prototypes for beer bottles, while Absolut is preparing a pilot of its first-generation package, for its Absolut Mixt "cooler" product line, in an undeclared market this spring. (Some early versions are in the hands of consumers.)

"While each pioneer is building on their own, they will be able to elaborate and build on each other, the partnership will contribute ideas," said Louise Werner, director of future packaging at The Absolut Company. "The idea is to feed the learnings back into all the projects."

Each company's goals are slightly different and their timelines are unique, Werner said, but the participants meet regularly by phone to share the benefits of their successes and mistakes. One vivid example of where they can benefit from each other — how to handle the process of digitally printing logos that can be affixed to the bottles.

"The paper bottle concept is still extremely early in its lifecycle, and so we will actively work within the community to advance the prototypes and overcome some of the hurdles we jointly discover," noted Stijn Franssen, senior engineering for packaging with Coca-Cola’s research and development team for Europe, in written responses to questions submitted for this story. 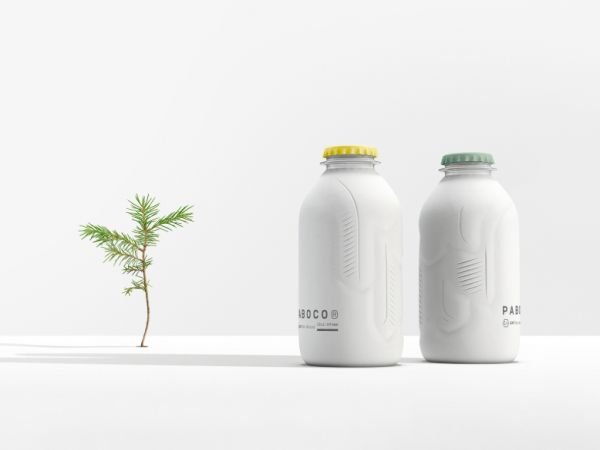 Paboco evolved out of a joint venture created in April between Swedish paper packaging company BillerudKorsnäs and Austrian plastic packaging producer Alpla, under which they acquired Danish fiber and paper bottle design startup ecoXpac. BillerudKorsnäs previously was a minority owner in ecoXpac, after becoming involved with the firm in 2015.

The goal of the venture is to create a bottle with a "bio-based barrier that withstands both water vapor and oxygen transmission." The caps, which are tethered, are being designed from either a biocomposite or pure paper. There are even aspirations for "mobile connectivity" so that it’s easier for consumers to dispose of them after they’re empty, and follow their "afterlife."

The production capacity of its backers suggests that it won't be difficult to achieve commercial production of these bottles — once a given prototype meets the rigorous design and performance criteria of the brands that are testing them. What’s more, the paper sources used by BillerudKorsnäs are certified to Forest Stewardship Council standards and are sustainably sourced from Swedish forests.

Michael Michelsen, business development manager for Paboco, said the organization’s ultimate goal is to create a bottle that is both biodegradable and recyclable. The word "paper" is a bit of a misnomer: The early prototypes being designed by the four companies involved in the community are actually a blend of materials including wood fibers and a thin "bio-based" layer.

"For now, we have something that can provide a reduction" when it comes to weight and waste, according to Michelsen.

The Carlsberg designs, for example, use a thin plastic film for the inner barrier. One design uses recycled Polyethylene terephthalate (PET) and the other uses bio-based Polyethylene Furanoate. "The first-generation concept will be partly renewable and fully recyclable, but it is the next and following paper bottle generation’s barriers that will create a truly sustainable alternative," notes Paboco on its website.

Coca-Cola’s work on the paper bottle is one of many alternative packaging approaches the company is considering and experimenting with as it works toward a goal of using 50 percent renewable or recyclable materials in all of its products by 2030; it has pledged to make all of its packaging recyclable by 2025, Franssen said.

While each pioneer is building on their own, they will be able to elaborate and build on each other, the partnership will contribute ideas.

"The first generation of the Coca-Cola paper bottle will be designed so that the plastic and paper parts can be recycled separately," he wrote. "Initially, Coca-Cola will use these bottles for smaller-scale brand activations within a controlled environment, making sure all bottles are collected and recycled. Consumer engagement with this new material is important, too, and this will be part of our learnings as well. Again, we consider the paper bottle a technology in its early stages and one which will develop significantly as we go forward together, including the way the paper bottles can be recycled efficiently."

Absolut is exploring the paper bottle format for many reasons, including its desire to lightweight its products, according to Werner.

"From our point of view, glass is a fantastic material," she said. "We strive to increase the amount of recycled content in our bottles. The future of glass is part of other work streams. But it is a heavy material. Paper is much lighter, renewable… If [the paper bottle] escapes the recycling loop in the future, it will be biodegradable. That’s an aspiration."

While Absolut hasn’t revealed where its pilot will take place later this year, it’s looking at markets where recycling infrastructure is readily available and consumer behavior supports that habit, Werner said.

Among the performance questions that Absolut is studying along the way:

On the latter point, it’s important to know that there are currently size limiting factors: Absolut Mixt bottles are 275 milliliters, which is one reason the product was chosen for the company’s initial prototyping project.

On the flip side, because the paper is malleable, the Absolut design team is exploring new three-dimensional shapes that could allow the company to create a new visual identity. "We are allowing ourselves to be playful," Werner said.

That’s also an upside for Coca-Cola. "Already at this early stage, various prototypes show that Paboco technology offers unique capabilities toward differentiating, alternative shapes and details," Franssen wrote. "A distinctive design, together with the correct functionality while contributing to a sustainable packaging future, that is what this innovation project is all about."