The Department of Energy's National Renewable Energy Laboratory has opened the doors of its new Research Support Facility, a green building showcase of high-performance sustainable design.

The $64 million 220,000-square-foot office building will use only as much as energy as it generates -- and it will use at least 50 percent less energy than if it were designed to current commercial code.

The facility incorporates a number of techniques -- some of them age-old like siting and orientation as well as the latest technology -- to achieve what its designers anticipate will be the highest level of recognition from the U.S. Green Building Council: LEED-Platinum certification.

The structure was recently recognized for having been "Designed to Earn the Energy Star," was highlighted among Energy Star Challenge projects at the American Institute of Architects convention in June, and was included in a Facebook Favorite Photos contest of Energy Star challenge project designs.

The first group of the roughly 800 employees who will eventually occupy the building began moving into their new offices in June; all are expected to be settled in by the end of September

Shaped-like the letter H, the facility will add another wing, which will house about 500 employees and is expected to be complete by the end of 2011, NREL spokesman George Douglas said.

As a prototype for future large-scale net-zero energy buildings, the research facility features high-performance design and passive energy strategies as well as renewable energy. Here is NREL's list of the buildings key elements:

4. Daylighting: 100 percent of the workstations are daylit. Daylight enters the upper portions of the south-facing windows and, through the use of devices, is reflected to the ceiling and deep into the space. 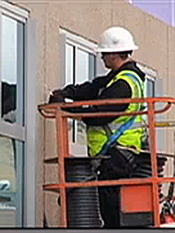 5. Triple-glazed, operable windows with individual sunshades address different orientations and positions of glazed openings. Some windows can be opened to bring in fresh air and cool the building naturally.

7. Radiant heating and cooling: Approximately 42 miles of radiant piping runs through all floors of the building, using water as the cooling and heating medium in the majority of workspaces instead of forced air.

9. Energy efficient data center and workstations: A fully contained hot and cold aisle data center configuration allows for effective air-side economizer cooling with evaporative boost when needed while capturing waste heat for use in the building. Plug loads are minimized with extensive use of laptops and high efficiency office equipment.

10. On-site solar energy system: About 1.6 MW of on-site photovoltaics (PV) will be installed and dedicated to the RSF. Rooftop PV power will be added through a Power Purchase Agreement, and PV power from adjacent parking areas will be purchased with 2009 American Recovery and Reinvestment Act funding.

The design-build team for the facility included RNL, Haselden Construction and Stantec.

Images courtesy of NREL and Haselden.