The energy giant aims to chart its path to a low-carbon future by midcentury.

NRG Energy today will announce new long-term sustainability targets, which include slashing carbon-dioxide emissions from 2014 levels 50 percent by 2030 and 90 percent by 2050.

“The goals we are setting today are really NRG’s attempt to chart the path to the low-carbon future,” Leah Seligmann, the company’s chief sustainability officer, told GreenBiz in an interview. “We needed to dramatically cut carbon over the course of the 35-year period if we were going to be in line with what scientists are calling for in order to deal with climate change.”

The International Panel on Climate Change has already warned of irreversible damage linked to greenhouse gas emissions and called for an 80-percent reduction of power-sector emissions by 2050.

“We decided to go a little further,” Seligmann said.

NRG’s chief executive, David Crane, will make the official announcement on the company's new sustainability goals this afternoon at a groundbreaking ceremony for a new corporate headquarters facility in Princeton, New Jersey.

As the owner and operator of one of the largest fleets of fossil fuel power plants in the United States, NRG Energy also ranks among the power generation sector’s biggest emitters of greenhouse gases. A 2014 report from the Natural Resources Defense Council ranked NRG as the seventh-largest coal generation company in the U.S. and the fourth-largest CO2 emitter in the U.S. electric power sector.

According to Seligmann, NRG’s new goals do not conflict with the carbon pollution reduction targets proposed earlier this year by the Environmental Protection Agency. The EPA’s Clean Power Plan calls for a 30-percent cut in power-sector carbon pollution by 2030 from 2005 levels, but it require faster reductions in the early years than NRG foresees in its new goals.

"The difference is that we have got a slower ramp up to meet our reductions, but then we go much further than the EPA,” Seligmann said. Since the baseline year for NRG’s new target is 2014, compared to the EPA’s 2005 baseline, “We are not taking credit for past reductions,” she added.

The company plans to rely on a combination of measures to curb emissions, including: equipping NRG’s existing coal plants with carbon capture technology, like it is doing for a $1 billion project in Texas; retiring older coal plants and switching to lower-emission natural gas in plants that will continue to operate; and continuing to expand into renewable and distributed energy.

“Carbon capture is definitely the one where we are most bullish, because this actually would allow us to create a revenue stream off of our carbon,” she explained. “The market for carbon is new. I think there are a lot of creative things we could do with this valuable material; the most important part being that it does not go into the atmosphere.”

With the Petra Nova commercial-scale carbon capture project in Texas, NRG and Japanese joint-venture partner JX Nippon Oil and Gas Exploration plan to capture 1.6 million tons of carbon a year at NRG’s WA Parish generating station southwest of Houston. The material will be piped 82 miles to the West Ranch Oil Field, where it will be used to enhance oil extraction. Because carbon captured from production wells is recycled, CO2 emissions are “negligible,” according to NRG.

Seligmann expects that capturing carbon from coal plants, retiring coal-fired facilities and replacing coal with natural gas will be enough to reduce NRG’s CO2 emissions 30 percent by 2030. But beyond 2030, additional measure will be required, such as capturing carbon from natural gas plants. NRG also will continue to expand into renewable and distributed energy – including home solar and electric-vehicle charging stations.

“Having already reduced the CO2 by 40 percent since 2005, we see a clear path to further dramatic long-term reduction as we vigorously pursue our multi-faceted, long-term sustainable growth strategy,” said NRG CEO Crane in a statement. “As the U.S. transitions to a renewables-driven, increasingly distributed, grid resilient energy system, we expect to be a leader both in clean energy and in converting the CO2 emissions of our conventional generation from a liability to a profitable by-product.” 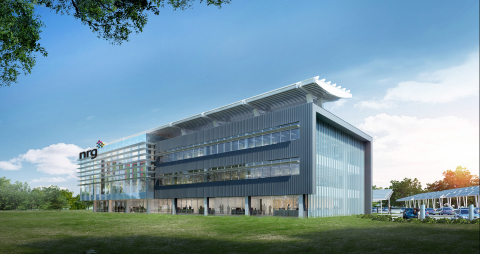 The building’s systems will allow it to remain powered if the grid fails. During Hurricane Sandy, the publicly-traded company lost power at its current headquarters and had to conduct a quarterly earnings conference call with analysts by candlelight, Seligmann recalled.

“That kind of thing won’t happen with the new building,” she said.