Borders are elusive when it comes to the oceans, whether in the public imagination, business or the law.

Naturally, much of Janis Searles Jones' work as Ocean Conservancy CEO is to transcend borders; she finds that passion for the oceans is bipartisan and building partnerships among "unusual bedfellows" is essential. The 46-year-old advocacy group's focus areas are vast: ocean acidification; smart planning; sustainable fisheries; "trash-free seas"; and regional protection of the Arctic and Gulf of Mexico.

After one year at the helm of the Ocean Conservancy, where she has worked for nearly a decade, Searles Jones counts numerous allies within business, NGO and policymaking bodies. For instance, the Trash-Free Seas initiative includes scores of partners: Coca-Cola; Dow; the American Chemistry Council; Walmart; and the World Plastics Council, to name just a few. And last fall, the nonprofit teamed up on a $150 million effort with the Closed Loop Fund to support plastic waste management in Southeast Asia, where a disproportionate share of the world's marine debris originates.

Searles Jones was raised near the Pacific coastlines of California and Oregon. From law school, she journeyed to Juneau, Alaska, hopping on a barge midwinter alongside her dog and pickup truck, to launch a career as an environmental attorney. She found handling ocean-related cases to be a revelation, a "wild frontier" from a legal perspective. Today, Searles Jones hopes that fresh attention to threats such as plastic pollution will bring more of the public's "mindshare" to the seas, and amplify the messages of "love and freedom" that ultimately drive change.

Elsa Wenzel: Do you think there's being more attention paid to the ocean? You have Sylvia Earle on the cover of Time recently, and more talk of the blue economy. Are you seeing much of a change in awareness with ocean plastics and other things like that hitting headlines?

Wenzel: Do you think the rainforest and other land-based ecosystems have been getting an outsize share of their attention in recent decades, compared to the ocean?

Searles Jones: It's easier to relate to something that you can touch and that you see every day. We always make this joke about trees and fish. If you're thinking about forests, it's a lot easier to count trees than it is to count fish. The ocean suffers both from this historical sense of being inexhaustible, on the one hand, and then on the other hand, being sort of out of sight, out of mind. ... Plastics and trash is such an interesting issue from an ocean advocate's perspective, because it is tangible, it is visible. Nobody likes trash.

The ocean suffers both from this historical sense of being inexhaustible, on the one hand, and then on the other hand, being sort of out of sight, out of mind.

Wenzel: The funny irony is that maybe the pollution is what's making people see something that's been relatively unseen?

Searles Jones: That is really one of the challenges and one of the real opportunities. Oceans have been incredibly inspiring for people. If you look at the Cousteau family, at all the different nature documentaries, the ocean is this seemingly endless source of new discovery. ... It's hard sometimes to pair what's happening in the ocean with how people relate to it. ... Oil spills are another real trigger for getting people to pay attention to the ocean. It is one of those things where sometimes you have to have what looks like visible damage to actually sort of catalyze that passion for the ocean.

Wenzel: What else might help to build awareness? Is there a big role that technology is playing in terms of  Google Earth or big data, or other ways to connect the dots, or bring the unseen to be seen?

Searles Jones: There's a huge role. As we have improved submersible technology, bringing all these images back and ... pushing them out into the world more, people can actually see what's in the ocean, what's in the deep. ... All of the remote-sensing also really improves our ability to monitor ocean acidification levels, for example. ... As you look at storm surges and sea-level rise, and how the ocean is directly affecting people’s communities, it becomes a more compelling aspect in their lives.

Wenzel: What do you think is the No. 1 challenge to the oceans now? If you had to pick one, what would you focus on first?

Searles Jones: Most scientists now would tell you that climate change is the biggest concern from an ocean perspective. ... You have increased acidification, on the other hand. And that has a variety of impacts, both for shell-building animals that live in the ocean, things that eat those shell-building animals, where fish and marine wildlife live, how their habitat is changing — and then for all of those coastal communities.

Wenzel: And for our readers, the vast majority of whom work in corporate sustainability, what would you say is the greatest opportunity for the business community in terms of helping preserve the ocean? 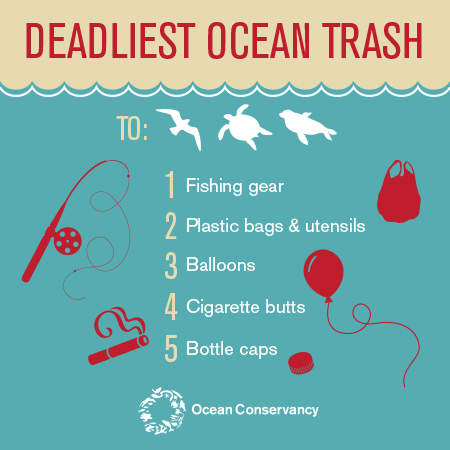 Searles Jones: One of them, which sort of started our corporate engagement almost three decades ago, is through the International Coastal Cleanup, which is a great way for corporations to engage their employees, provide a volunteer opportunity that invests in local communities, gets people out touching the ocean. ... We are definitely seeing sort of an evolution of things from an employee engagement lens, shifting to a sustainability lens, becoming part of the C-suite conversation about brand risk and how corporations position themselves as far as sustainability goes, and recognizing that there are a lot of long-term interests in ocean conversation.

Wenzel: Do you have some success secrets for building a big web of partnerships like this across so many regions and organizations and types of organizations?

An example in the trash and plastic space is the Trash Free Seas Alliance, which grew out of the work that we had been doing on the international coastal clean-up. ... It's generated one of the only global databases on marine debris. ... We took an approach where we wanted to bring unusual bedfellows, if you will, into the room.

We are definitely seeing sort of an evolution of things from an employee engagement lens, shifting to a sustainability lens, becoming part of the C-suite conversation.

Wenzel: What should businesses know if they would like to get involved with the Ocean Conservancy?

Searles Jones: From a plastics perspective, we only work with the best corporations, and they have to be committed. ... We're really looking for where this desire to affect change originates. Does it come from the top? Is sustainability or commitment to a certain issue central to the way that partner operates and makes decisions? Can they help us solve a problem? Will their involvement bring around real, meaningful change?

Wenzel: Are there any big success stories that inspire you in your work that you think of as, "I wish I could have achieved this in my work with the Ocean Conservancy"?

Searles Jones: One of the [social change campaigns] that one has to take real inspiration from is the Freedom to Marry campaign. ... [It] did a lot of really careful thought and analysis to figure out that what people related to was love and freedom — not so much rights and sort of the legal part of things. And when they rethought the campaign and re-executed a strategy against what people had been telling them they care about, which is love, it really changed the outcome.

I have not seen sort of a social change movement happen that rapidly. It's really extraordinary when you look at it. ... And so one of the things that we’re doing is having a much more fundamental conversation about ocean constituents about what their core values are.

Wenzel: So many campaigns around environmental conservation or climate change awareness are about doom and gloom or fire and brimstone, or they’re fear-based. Or they’re very wonky. So, how do you make the shift from that fear to love and freedom?

Searles Jones: Everybody wants clean air, clean water, clean beaches. ... Nobody wants to drink dirty water, nobody wants their kid to drink dirty water, nobody wants to breathe polluted air. ... How do we figure out how to be much smarter in terms of talking to people about that? And so, [that's] me not talking about the max of sustainable yield for a particular fish stock when what somebody cares about is whether they have a clean and healthy environment, and ways to translate that...

Part of our job is to get both more sophisticated and more heartfelt in having that communication with people, and making that connection, and giving people on-ramps and ways to express that value, and express that heartfelt concern about the ocean in a way that is relatable to them.

Wenzel: Can you talk a bit about the notion of the blue economy, this idea that more people are waking up to the untapped business opportunities and the natural capital inherent in the oceans? That seems like a positive thing, but then at the same time, of course, where there are resources, there can be exploitation.

Searles Jones: One of the things that really struck me when I moved from the terrestrial world to the ocean world is sort of how fragmented both the jurisdiction was, but also the different regulatory authorities. ... It tends to be focused on single-resource extraction.

One of the things that we have been thinking about is ocean planning. ... It's just being smart about how you plan for and then execute activities in the ocean. But it is not nearly as widespread in terms of being required, or even being thought about. ... A lot of industries and sectors need to think about how all of the pieces fit together instead of just identifying sort of a single resource opportunity.

Wenzel: Also, in terms of innovation, what do you think about the promise of the so-called circular economy, and where do the oceans come into play there?

Searles Jones: In the short term, we're very much focused on the annual input of plastic waste into the ocean, which is about 8 million metric tons that goes into the ocean every year, which equates to roughly a garbage truck dumping a full load of plastic into the ocean every minute, and recognizing that if we cannot get in front of that problem, some of the excellent work that's being done on circular economy, on product innovation, on a lot of other fronts, will have sort of passed the ocean by.

Wenzel: What advice would you give to somebody who wants your job someday or just wants to work in an impactful way in sustainability?

Stopping the flood of marine debris

How She Leads: Beth Stevens, Disney

How 'third way' technologies can help turn tide on climate