Crowdfunding is everywhere today, reaching out to individuals in our field to fund documentaries on climate change, solar schools in England, solar systems in the U.S. and a wind turbine in the Netherlands. Now the ocean energy industry has launched its own platform, Clean Reach.

Designed to address a lack of early stage funding for this high potential energy industry, it wants to help entrepreneurial startups, coastal communities and even mature ocean energy developers to get funding and other resources that take it from a good idea to commercial technology.

"Ocean energy visionaries across the globe have pioneering ideas that, if given the opportunity to reach fruition, can be the difference makers in providing clean, renewable energy to the world population," says Stephanie Thornton, co-founder of Clean Reach. "Creating commercially viable ocean energy technology is paramount, but investors aren't giving renewable energy the attention it deserves."

Just 0.1 percent of the ocean's energy could provide energy for 15 billion people, according to Michael Bernitsas, professor of naval architecture at University of Michigan. Yet, 3 percent of venture capital supports development of the industry. 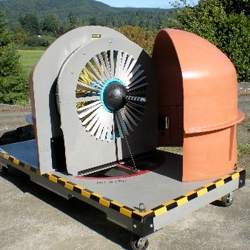 Some projects they are currently raising money for:

• An entrepreneur developing a wave energy turbine (pictured right) that is more efficient and produces more power at lower cost than those available today. Funding goal: $3,500