While more landlubbers on the U.S. mainland embrace the sun or wind as a potential source of clean, renewable energy, that isn’t necessarily a scalable option for companies and communities on islands such as Hawaii that have limited soil-bound real estate.

That’s just one reason this state is a mecca for a growing number of experimental offshore power projects, a topic that will be debated next week during an expert panel at the upcoming VERGE Hawaii in Honolulu.

Another big motivation: Hawaiian citizens are still heavily dependent on oil, which was responsible for about 68 percent of the state’s electricity as recently as 2014, according to state data. The state is giving itself just shy of 30 years to eliminate that dependence, aiming to source 100 percent of its electricity from renewable generating sources by 2045.

But how will it get there? It will take far more than just solar or geothermal or freshwater hydro, all of which contribute to Hawaii’s renewables mix already. The surrounding ocean holds much promise, but many related generation approaches are years from commercial viability — such as turbines that harness tidal power or buoys that harness wave energy.

The short term focus on two very different options for generating electricity using the Pacific Ocean surrounding the Hawaiian islands: floating wind farms and ocean thermal energy conversion, according to several experts who will speak at VERGE Hawaii next week.

"As a former energy administrator, I’ve seen dozens of projects and [offshore floating wind] is the lowest impact," said Ted Peck, director of community and government affairs, and lead developer for Progression Energy.

Mind you, he has a vested interest in saying so: His company is one of two organizations, along with A.W. Hawaii Wind, that are proposing floating wind farms off the beaches of Oahu — together, the projects could serve around 30 percent of the island’s energy needs, according to local estimates.

Progression’s proposal is for a 400-megawatt farm off the southern shore of Oahu. The project would install between 40 and 50, 600-foot tall WindFloat turbines that are tethered to the ocean floor in water roughly a half-mile deep. That’s pretty far out, so you couldn’t call this a nearshore solution, but the turbines are likely to be visible from land on the horizon. The electricity would be distributed back to land via submarine cables.

Windfloat’s technology is already being used in places such as Portugal. Still, floating turbines are a largely unproven technology. About 40 floating wind farms are under way around the world. Japan has been running a demonstration since 2013, the Fukushima Forward initiative. The National Renewable Energy Laboratory estimates that the wind off the entire U.S. coastline are capable of generating up to 4,223 gigawatts of power, which is more than the country uses today. Hawaii’s shores account for 17 percent of that potential.

Peck’s team has discussed the pros and cons at well over 100 meetings with hotel industry groups, environmental groups over the past four years. Progression faces a long list of obstacles, including winning over the support of the native Hawaiian community, consulting with marine biologists and ornithologists worried about the impact on whales and birds, and assuaging local tourism boards that the technology won’t turn off surfers. Not to mention the actual cost of building the farm.

"We feel pretty good about the reception," Peck said. "There is no room on this island for another wind farm."

If all goes according to Progression’s timeline, the farm will be under construction during 2020 and 2021 with commercial operations slated to begin in 2022.

Another technology being studied more seriously in Hawaii as well in Japan’s Okinawa, Guam and across the Caribbean centers on ocean thermal energy conversion (OTEC) principles.

In simple terms, OTEC systems such as the one pictured below harness temperature fluctuations in the cold deep water and warm surface water to generate electricity, which can be added to the grid. 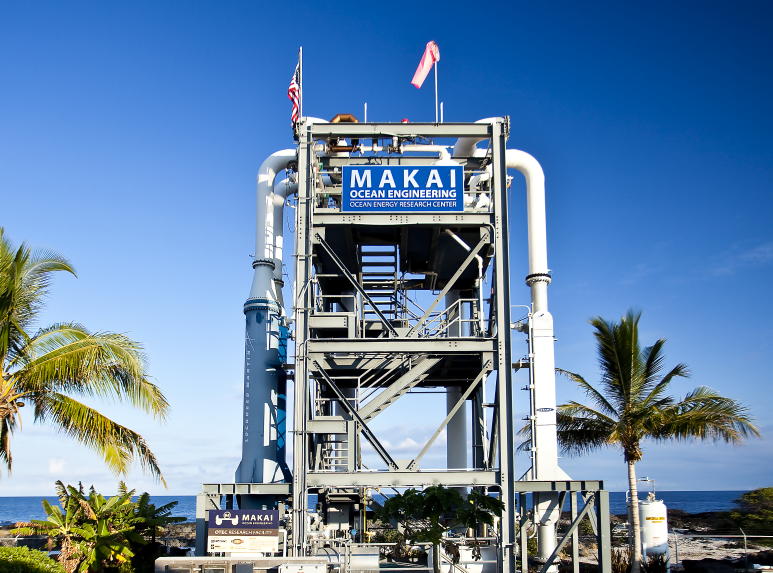 Another compelling argument: OTEC systems can be used in collaboration with district cooling systems. The cold seawater left after this process can be pumped buildings to dramatically reduce the amount of electricity they must consume to stay cool, said Duke Hartman, vice president of business development for Makai Ocean Engineering, one of the foremost developers of OTEC.

"Hotels can spend 40 percent of the energy on air conditioning," he said. "If you can replace that by pumping up the cold water, that’s a sustainable way to use ocean energy.

Makai is behind several test facilities, including one at the largest dedicated research facility for OTEC in Kona, Hawaii. One challenge, Hartman admits, is that even small plants could cost hundreds of millions of dollars to build. Efficiency is a challenge in locations where surface temperatures aren’t that different from deep water ones. Both of these factors have made running proof-of-concept installations difficult.

"The resource is ample, but how much of it can we convert? No one can really answer that right now," said Luis Vega, manager of the Hawaii National Marine Renewable Energy Center and an expert in OTEC technologies.

It will take much larger experiments, Vega said, to establish OTEC but the permits are difficult to obtain and the funding is scarce.

"In the case of ocean thermal, we’re in secondary school," Vega added, describing the industry’s current knowledge of what’s possible. In his analogy, solar and wind technologies are already working their way through graduate school while nascent research around approaches such as wave energy are barely in preschool.