An 'oli' from Hawaii, where the Aloha spirit greets clean energy

From tourism to transportation, businesses in the 50th state are rallying behind its commitment to addressing the impacts of climate change. But cultural considerations will dictate the pace of progress.

No state, perhaps, is more culturally inclined toward a low-carbon, clean energy future than Hawaii. There's even a native Hawaiian language phrase describing that mindset: "Mālama Honua." Roughly translated, it means "to care for our Island Earth."

That cultural leaning simultaneously could become the state's largest advantage, and its biggest challenge, as it strives to reach its ambitious goal of becoming powered entirely by renewable energy by 2045.

On the one hand, much of the state's population of 1.4 million people are galvanized by the idea of relying far less on imported fuels and of building infrastructure resilient in the face of rising seas and more frequent storms. Yet, local land development policies — shaped largely by considerations for the indigenous peoples — aren't necessarily evolving quickly enough to accommodate that transition. Welcome to the pace of business, on Hawaiian time.

Moreover, the state is largely beholden to the impact of non-residents who may or may not care about its political proclamations, a theme sounded often during VERGE Hawaii. Last year, the 8.9 million tourists flocking to the islands spent more than $15.6 billion there. Those visitors generally consume at least two times as much energy as those who live in Hawaii year-round, presenting a very real dilemma when it comes to reducing consumption without limiting the potential for economic growth.

Can the strength of Hawaii's culture prevail? The "spirit of Aloha" was certainly front and center last week for close to 750 registered attendees and thousands of live-stream viewers. From local inspirational speaker and cultural expert Ramsay Taum opening the conference with the traditional "oli" blessing chant to spirited debates about inclusive strategies for clean power and sustainable, resilient growth, to a moving closing ceremony, here's what you missed. (Register here to view the free virtual event archives.) 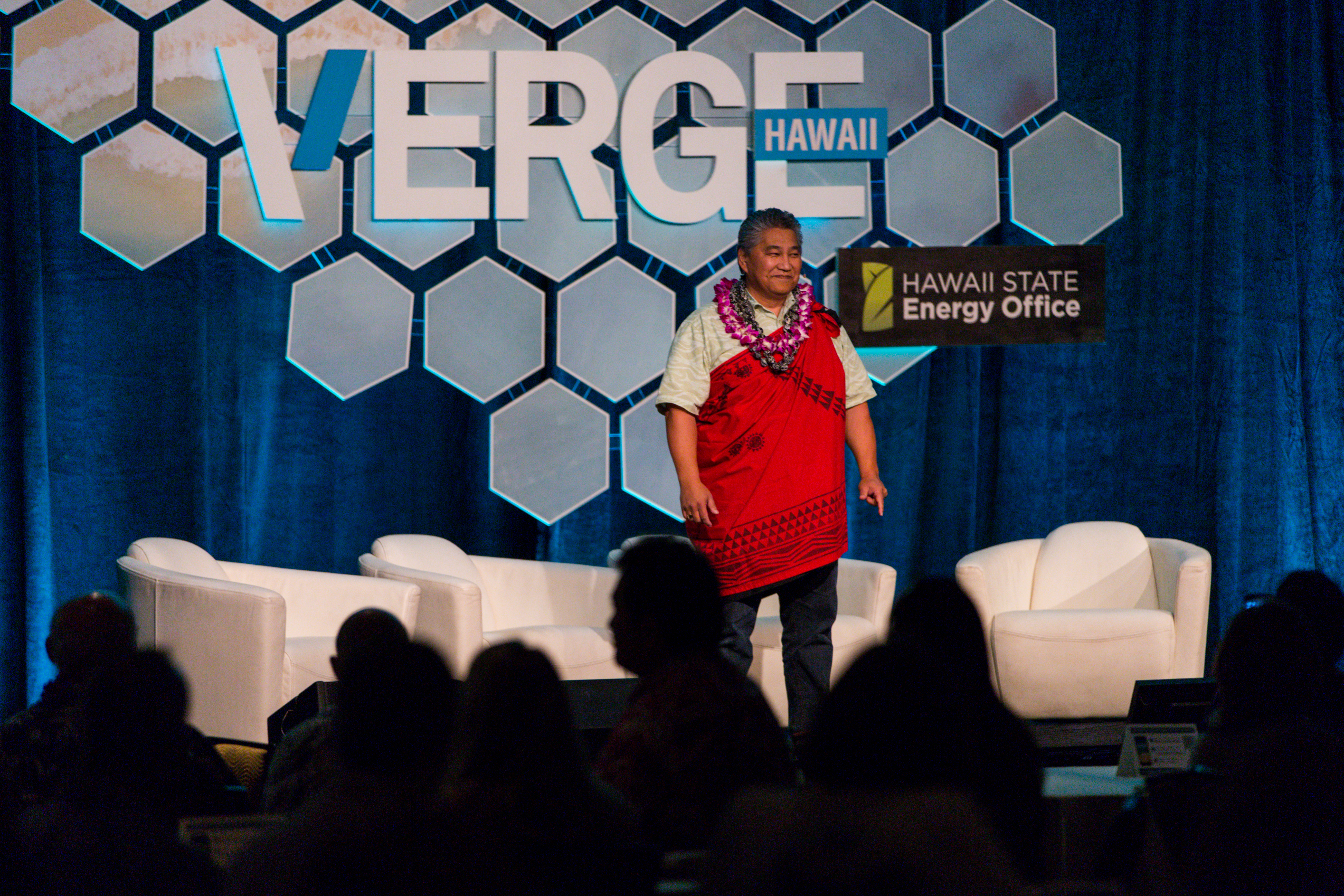 The perfect antidote to the thumping techno tracks that often open technology conferences? How about an a cappella chant to galvanize attention?

Ramsay Taum, cultural sustainability planner and co-director of Sustain Hawaiʻi, delivered the conference "oli," a traditional blessing used by Hawaiians throughout generations to preserve oral histories and traditions. It immediately reminds "off-island" visitors that this state conducts business according to unique customs that have been honored for hundreds of years. And it reassures local attendees that cultural considerations will be at the core of Hawaii's quest to become the first all-renewable state. 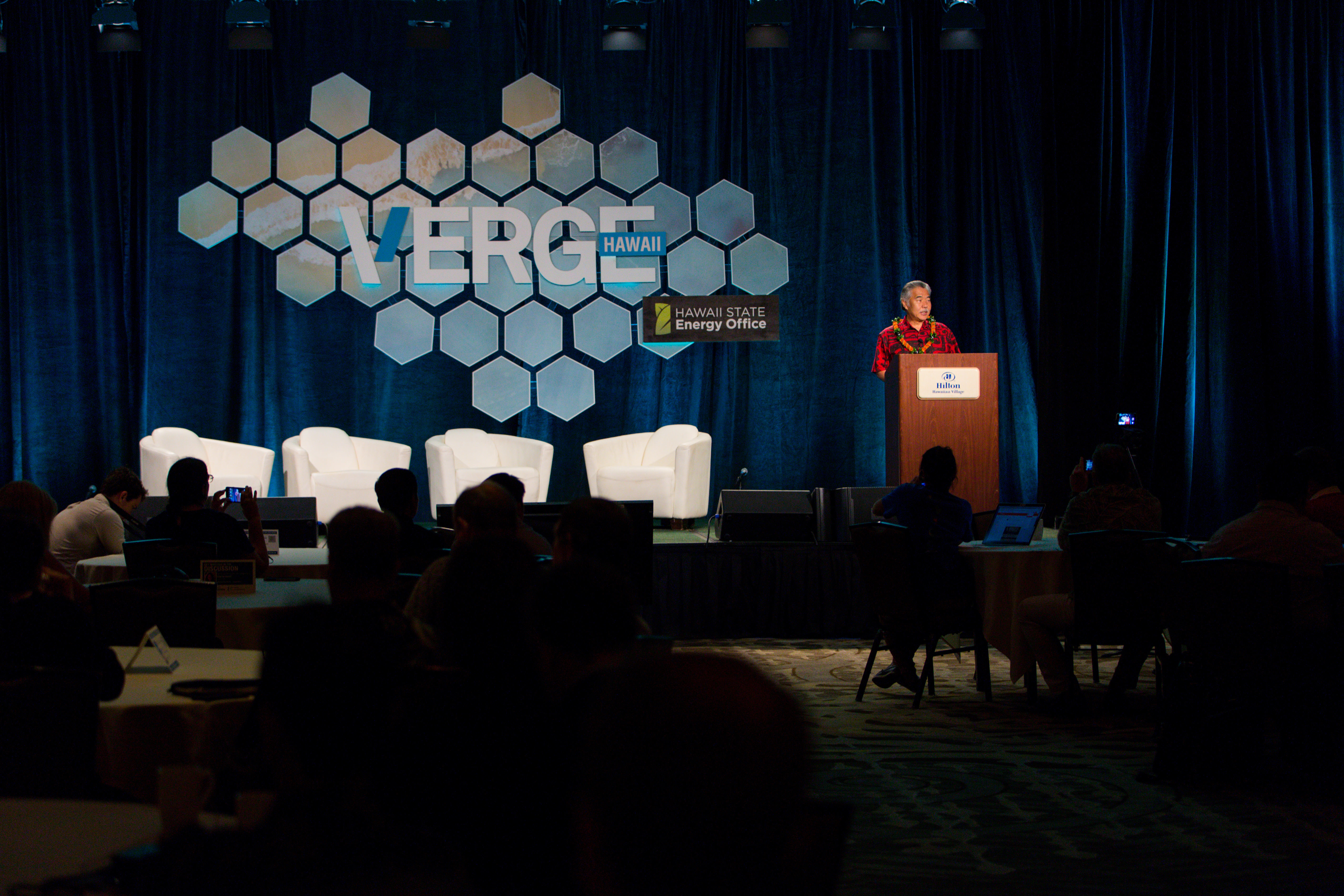 Just two weeks before VERGE Hawaii, state governor David Ige made history by signing legislation that commits the archipelago to the spirit of the Paris Agreement. "Climate change is real, regardless of what others may say," he said at the bill-signing ceremony. "Hawaii is seeing the impacts first hand. Tides are getting higher, biodiversity is shrinking, coral is bleaching, coastlines are eroding, weather is becoming more extreme. We must acknowledge these realities at home."

In his opening address at last week's conference, Ige reiterated Hawaii's clean energy mandate and also underscored the need for better energy efficiency along the way. New building codes adopted by the state in March could help businesses there save up to $14.5 billion across the islands over two decades.

The state has many miles to paddle on its journey. At the latest tally, about 26 percent of its electricity comes from renewable generating sources such as solar and wind farms, with 30 percent in sight by 2020. Some islands are faring better than others: for example, the Big Island of Hawaii generates more than half of its power from clean sources while Maui stands at about 37 percent, according to data shared by Ige in his conference address. 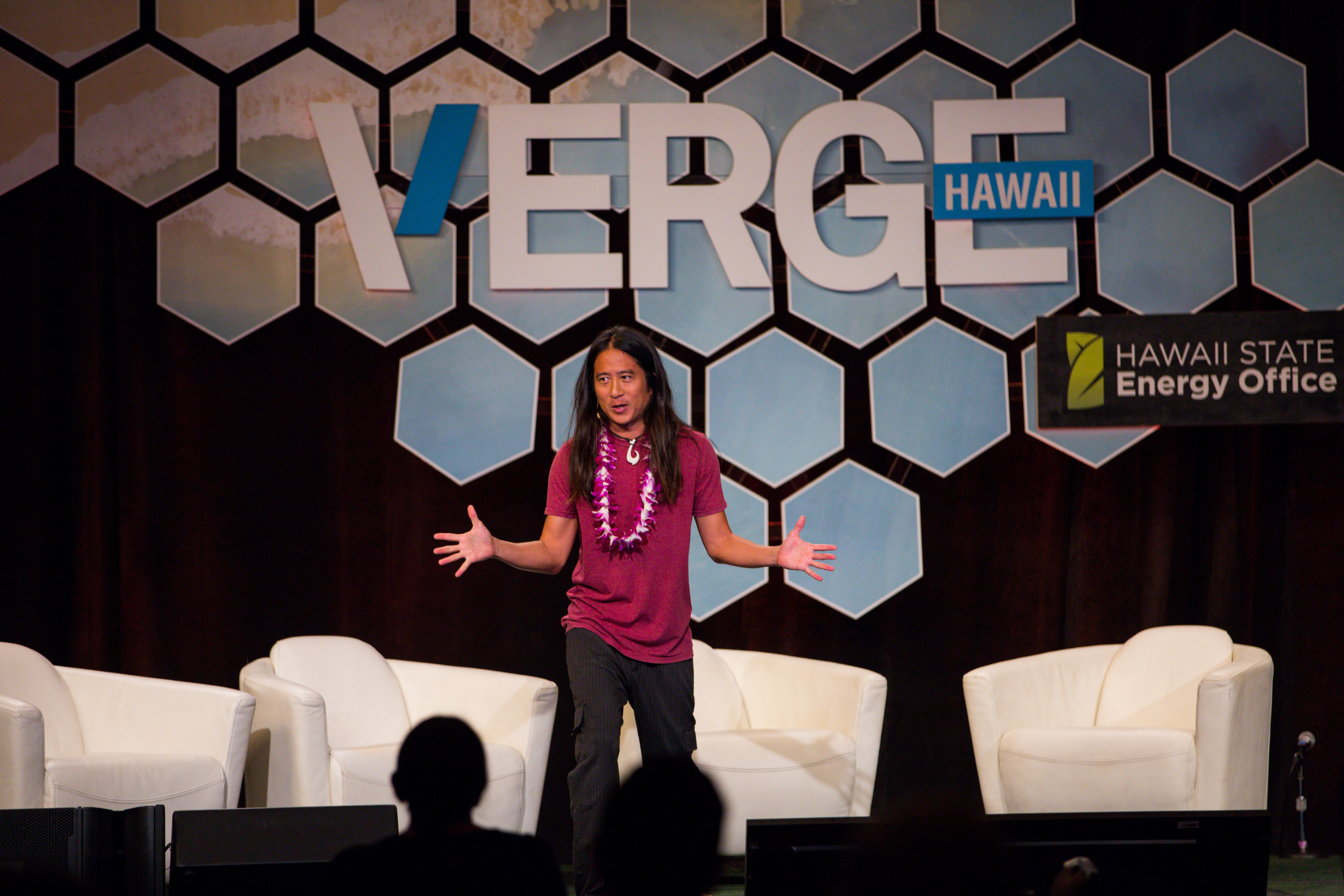 The first poet laureate of Hawaii, "slam" performer Kealoha, exhorted attendees to "listen" to the wind, sea and land in shaping their approach to life and business. "You can hear the world breathing if you just listen," Kealoha urged. "This world becomes a miracle when you take time."

Breaking from his performance persona, this MIT-educated nuclear physicist described clean energy and sustainability as his first passion, one he more than happy to immortalize with his verse. His personal message for VERGE Hawaii: Stay hopeful, take responsibility for what you can control and balance progress with preservation. "Technology must serve ecology." (You can listen to an excerpt of Kealoha's riveting performance on the June 23 episode of the GreenBiz 350 podcast.) 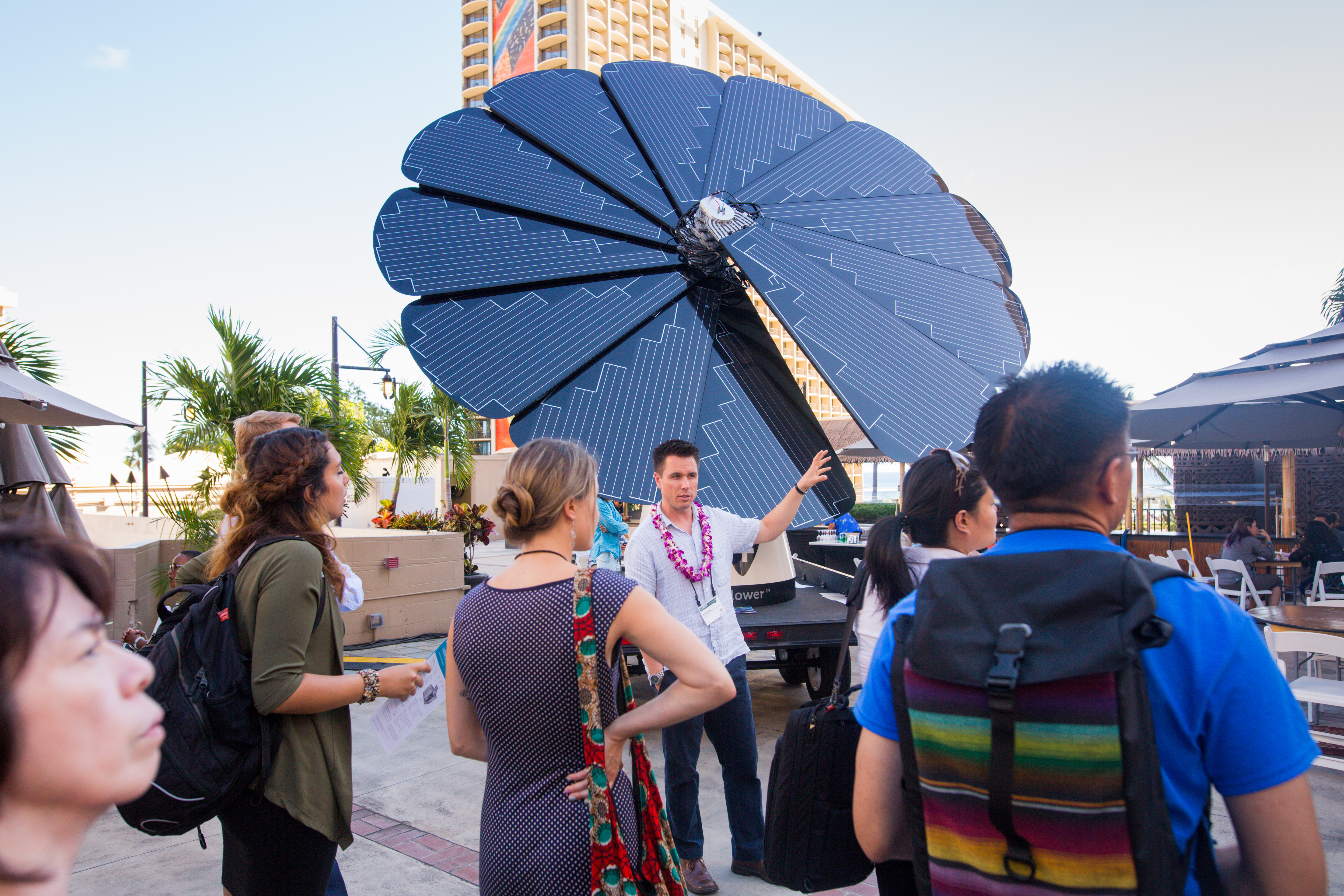 Powering the VERGE Hawaii event last week was our very own microgrid, designed, engineered and installed by OpTerra Energy Services and made possible through loans of equipment from a number of forward-thinking technology organizations. The emissions reduction impact of the clean power generated by the system was the equivalent of taking roughly 26 passenger vehicles off the road for one year.

The most visually striking element was the Smartflower solar photovoltaic system, shown above, which features panels (or should we say petals?) that follow the sun to optimize efficiency. Other technologies that were part of this year's working design: the Spirae Wave microgrid controller, a Pacific Biodiesel generator, a PrimoWind turbine, an Ice Energy ice storage air-conditioning system and an electric car charging system.

Energy justice for all 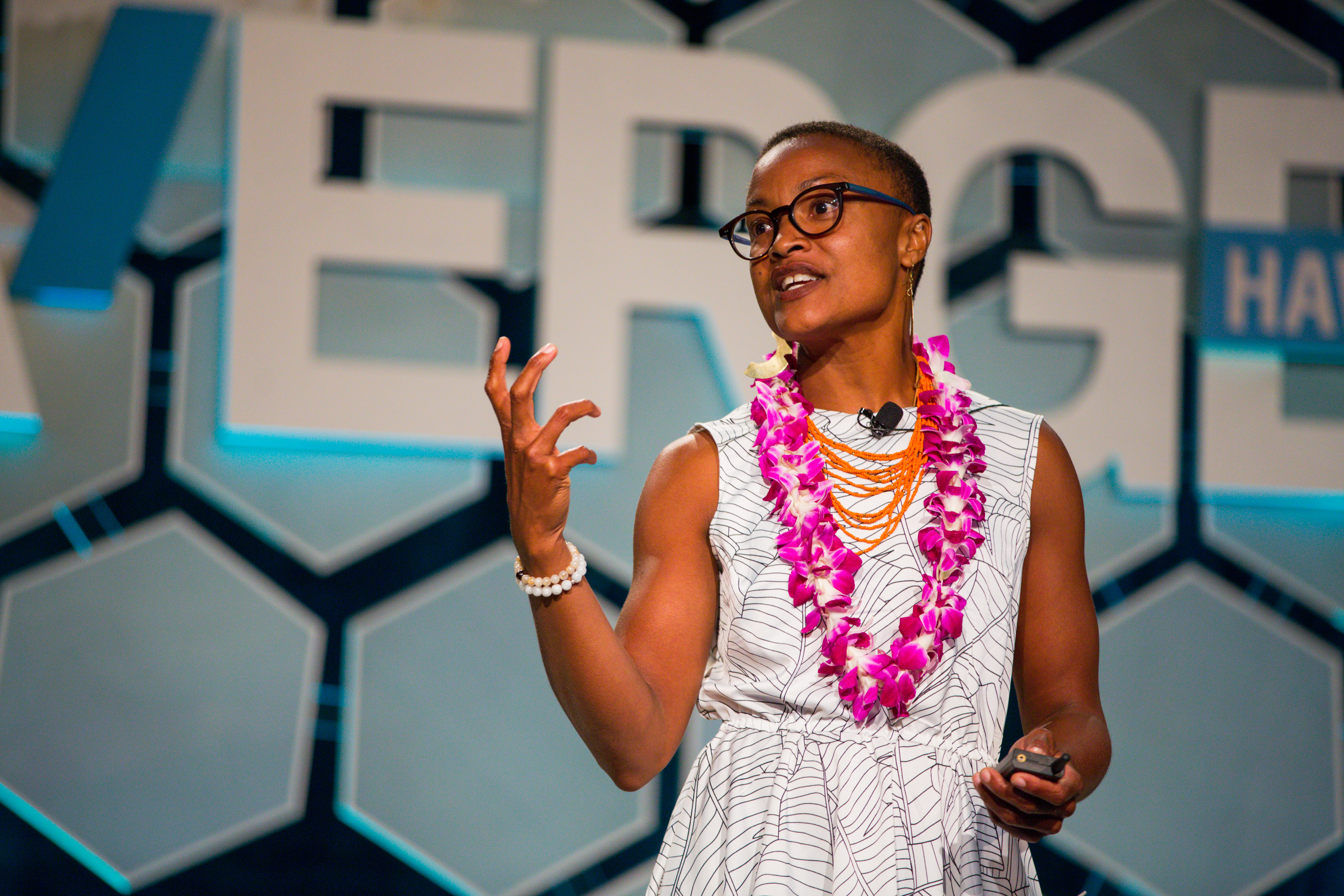 The transition to a low-carbon economy  — in Hawaii and elsewhere — offers a unique opportunity for cities and communities to reconsider systemic issues of poverty and inequity, but it will take diligence to ensure this remains part of the dialogue. A debate over how best to take action became a dominant theme and undercurrent of chatter during the event. "The current system is inherently unjust," observed Shalanda Baker, an associate professor of law and director of the Energy Justice program at the University of Hawaii.

"Wealth is concentrated in the hands of very few. Individuals who pay the highest percentage of their salary and their income to electricity don't fully have an opportunity to engage in the production of energy. ... As we move into our energy transition, hopefully we'll be able to develop policies and a framework that allow for those people to participate in energy production." 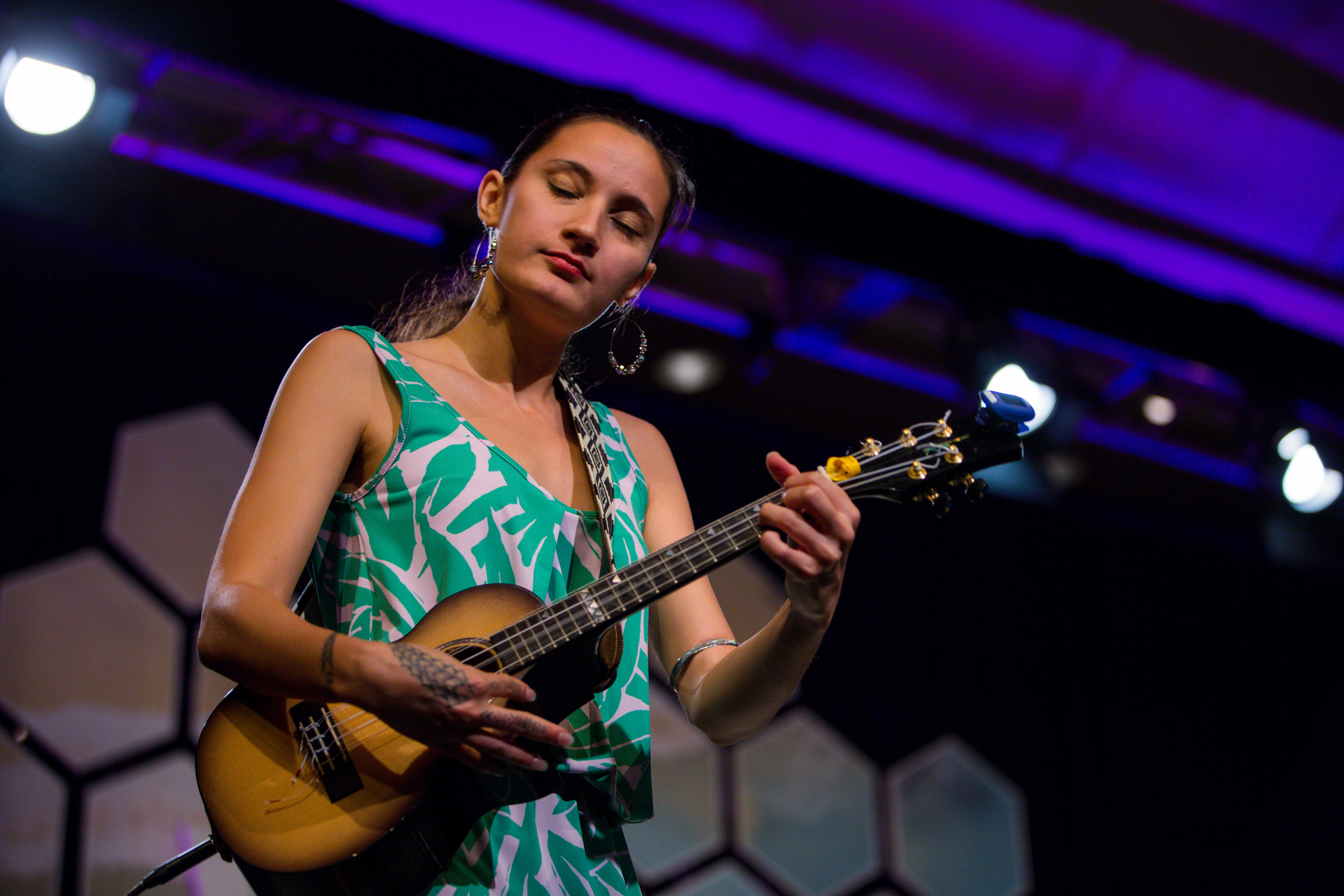 Accompanying the soundtrack of Hawaii's unique melody of life is one of its two official state instruments, the ukulele, an adaption of a small guitar imported from Portugal. (The other is the pahu drum.)

Local "virtuoso" Taimane, who is of Samoan and German descent, honed her craft at a young age and donated countless hours when still a pre-teen to playing with a street band comprised of homeless individuals. The musician intrigued the audience with a unique mashup starting with Led Zeppelin's "Stairway to Heaven" and drifting away into hints of Beethoven's "Fur Elise." Heavenly.

Mimicry is the sincerest form of flattery 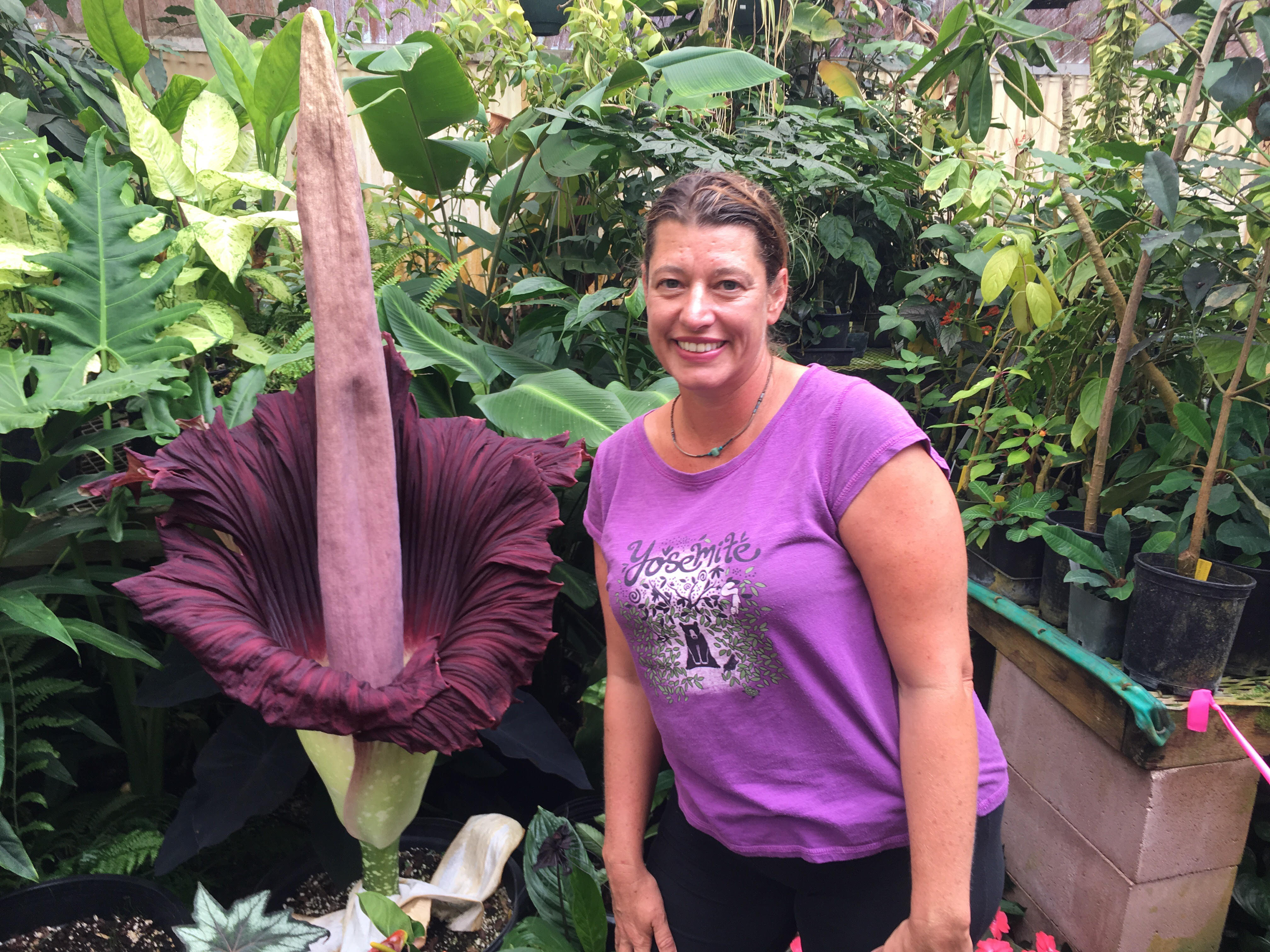 Mimicry also can provide clues about how humanity can thrive in the future. Tamsin Woolley-Barker, a Ph.D. in biological anthropology, led a hike through seldom-traveled trails at Harold L. Lyon Arboretum. Carl Evensen, Arboretum director, chanted oli at the start of the hike. Strolling through towering native Koa, huge banyan and monkeypod trees, attendees observed the essentials of "biomimicry," or human innovation that emulates nature's time-tested strategies, bringing to life the concepts described in "Teeming," Woolley-Barker's book on the topic.

"We saw water beading up and rolling off the [self-cleaning] surface of the taro leaf," said Woolley-Barker. They observed a last remaining population of hibiscus native to Hawaii, Kokia cookei, which helped develop a dye-sensitive photovoltaic that humans use today.

Viewed through the biomimicry lens, Hawaii is a natural laboratory for "how we can design better systems based on what's been proven to work for billions of years," she said. "There are 33 million species on Earth. They've all solved the same problems we have and survived for 4 billion years." One perhaps less welcome species, still haunting us today, is the giant, smelly corpse flower, near which the biologist bravely posed.

Go forth, hand in hand 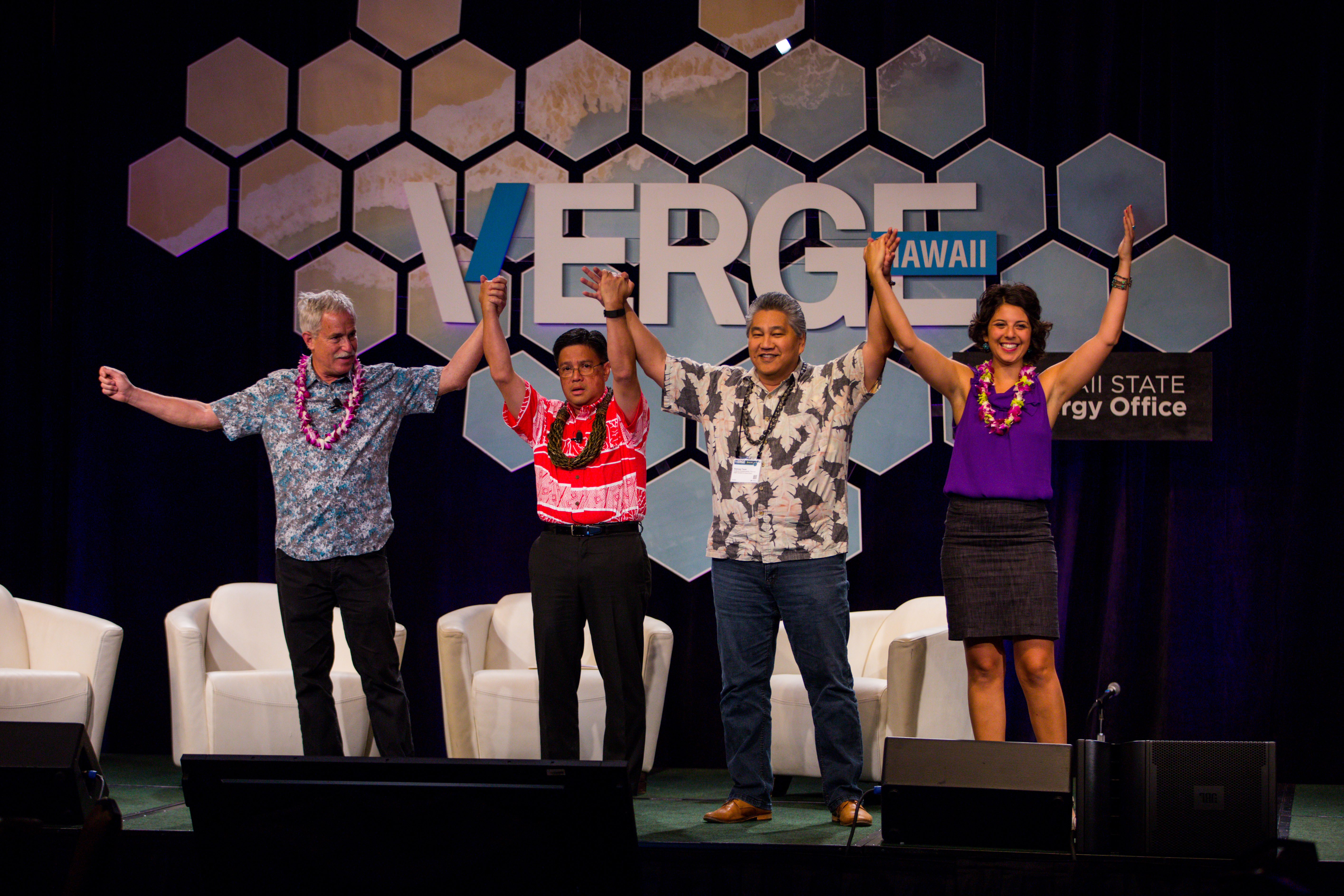 By title, the conference's closing speaker, Pono Shim, is an economist. But he spends far more time these days thinking about how to harmonizing Hawaii's clean energy and sustainability symphony — so that the melody is one that can be sung by all generations and across the unique culture revered in the island state.

That's not always simple, noted the president and CEO of the Oahu Economic Development Board. Sometimes well-meaning proponents don't spend enough time listening, especially to the millennials — the "great rebounders" improvising new variations on the theme. "Sometimes, the trombones need to tone down so we can hear the oboes," he said. "We need to start conducting as an orchestra, so we make this music."

The conference ended as it began, with a song. The "Hawaii Aloha" (aka "Kuʻu One Hanau") is sung at the end of every notable concert, meeting and gathering. I, for one, am committed to learning the lyrics before next year.