A new analysis shows that 16 percent of the global economy could soon be covered by net-zero goals.

The countries of Bhutan and Suriname are already carbon negative, meaning their economies absorb more greenhouse gasses than they admit, while Norway and Sweden have legally committed to having net zero emissions by 2030 and 2045, respectively, meaning they have committed to bringing their emissions as close to zero as possible and creating sinks that mop up the emissions they still have.

All total, almost one-sixth (16 percent) of global GDP is covered by net zero emissions targets set by nations, regions and cities, according to a new analysis called "Countdown to Zero: Plotting progress towards delivering net zero emissions by 2050," published by the Energy and Climate Intelligence Unit (ECIU).

The analysis shows that 15 countries have either proposed legislation to be net zero by 2050, enshrined the target in a policy document or are otherwise considering it, and that number is certain to grow. Last week, 24 of the 28 countries comprising the European Union endorsed a proposal to make their entire block carbon neutral by 2050.

In addition to these countries, 11 subnational jurisdictions, meaning states and regions such as California, Catalunya and Scotland, as well as 23 major cities including Barcelona, Los Angeles and Chicago, have made similar commitments.

"Having a net zero target with a date before mid-century is probably the best single indicator of whether a nation is serious about delivering what it promised at the Paris summit, so it’s notable that such a large slice of the global economy is already being conducted under net zero targets," said ECIU Director Richard Black.

If a government isn’t planning to bring its own emissions to net zero, it can’t really claim to be planning to do its share of stopping climate change.

In December 2015, all governments pledged in the Paris Agreement to attempt to keep global warming to 1.5 degrees Celsius. In October, the Intergovernmental Panel on Climate Change, the United Nations expert body, showed that in order to stand a reasonable chance of achieving this goal, governments need to bring carbon dioxide emissions to net zero by 2050.

The new ECIU analysis shows that at least 34 companies with annual income above $1 billion have set net zero emissions targets — and a few already have met them.

The report was launched on the sidelines of a United Nations climate meeting in Bonn, Germany, along with ECIU’s online Net Zero Tracker. The tracker collates and displays information on countries, regions, cities and states that have set net zero targets, and countries that are planning to do so. It will be updated as more sign up. 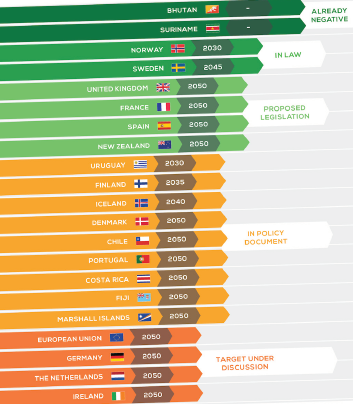 See all by Gabriel daSilva