Recently the entire San Francisco Bay Area went into a near collective panic-attack when it was announced that the Bay Bridge might not open in time for the morning commute. This prompted many people to ponder how they would get to work with a general sense of frustration, dread, confusion and impending helplessness.

What if there was something you could do at your workplace to improve employee productivity and overall disposition, boost customer satisfaction and reduce your carbon footprint? Exponentially increase your advertising outlets, improve your public relations and reduce your health premiums? At the same time alleviate traffic and parking challenges near your office, restaurant or retail outlet? What if the government subsidized all of the above? Best of all, what if the solution was not a form of complicated clean-tech wizardry in beta phase in a warehouse in Silicon Valley with frighteningly high costs for early adopters, but rather a simple device, invented in the 1700s and readily available today? For less than $400?

It is the bicycle, and it is (hopefully) coming to a business near you.

Bicycles have long been the secret weapon of urban planners. From cultural icons like Amsterdam to massive metropolises like Tokyo, bikes are becoming the de facto form of transportation for old and young, worker, retiree and hipster alike. Cities are beginning to realize that bike racks are not just a place for adolescent bumper stickers -- they have real value, as a recent article in Slate eloquently articulates.

{related_content}We all know that it is more efficient to carry 30 pounds with us to run an errand instead of 3,000 pounds. At the same time, it is rare to see bike programs mentioned as part of the sustainability arsenal of large corporations. A quick scan of 10 of the Global 100 Most Sustainable Corporations turned up only one employee biking program in Europe and none in North America. Promoting bicycle usage, like many challenges in corporate sustainability, lies in taking a small solution to scale. In which case what we need is a good example.

Fortunately, I found just such an example over Labor Day weekend, while traveling in Ashland, Oregon. Ashland is a stunning town on the southern edge of Oregon, tucked between towering tree-lined hills that would be called mountains in my home state of Maryland. Oregon is a progressive state. It was the first in the country to pass the bottle bill, in 1972, and still recycles bottles and cans at almost three times the rate of states without bottle bills. But it also knows firsthand the delicate balance of economy and environment at a macro scale. Recall that when the federal government restricted logging near Northern Spotted Owls in the early 1990s, timber harvesting dropped by over 80 percent in some districts there, and whole towns were decimated.

Oregon remains a steady source of minerals in the U.S. and a leading timber producer. But it has managed to shift its economy from a heavy reliance on extractive industries to one more balanced on manufacturing, health care, real estate and services. Manufacturing's share of Oregon's GDP is now greater than the national average, and increased 147 percent from 2001 to 2007 while it decreased over the rest of the U.S. during that period. Tourism booms. Intel and Nike anchor the coastal job market. Retirees, and the many services they require, flock to the state. (Everyone flocks there actually, which is why unemployment is high in Oregon). The genuineness of the people and the breathtaking nature of the landscape make the state seem surreal, but it is a very real place. We can learn a lot from Oregon. And what better place to start than a brewery. 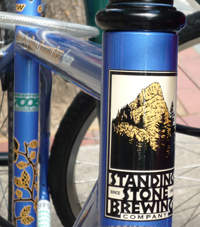 The Standing Stone Brewing Company sits at 101 Oak Street in Ashland, in a building that is listed in the Historic Registry. It is large and brick, with ample light inside, a big outdoor deck in back and many bicycles along the sidewalk in front. On August 26, owners Danielle and Alex Amartico launched what they called the "RPM Club" -- A free bicycle to each employee who agrees to at least 45 round-trip pedal-powered commutes per year.

Immediately 17 employees, almost a third of the total, signed up, including several who had not previously been bike commuters. The bikes have Standing Stone's logo on them, giving the brewery widespread eye-level advertising -- critical when there are tourists wandering everywhere at Oregon Shakespeare Festival, pondering their next meal. The employees I spoke with were on a pace to well exceed the 45 days per year minimum, psyched to get new bikes, and were especially proud that their employer had put their money where their mouths are when it comes to sustainability.

Alex Amartico cites the health benefits, his employees' excitement, the marketing value and the increased parking availability in the congested downtown area as the main benefits of the program. And now everyone knows him.

"The barista at Starbucks knew my name from the local paper and said she was writing her employer to start a similar program," Amartico remarked.

"Companies spend thousands per employee on health care, why not spend $300 on a bike?" he asked.

It is a good question. 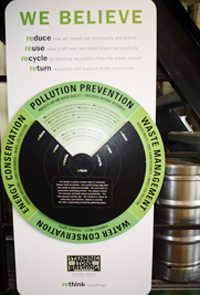 Lest you think this is an idea for small town breweries only, read through the company's sustainability commitment and you will realize that the bike program is just one of several initiatives Standing Stone has instituted to address some very large challenges.

We can learn from their approach here too. First of all, they simplified their sustainability program into four very basic activities they believe in: Reducing, reusing, recycling, and returning; and four main focus areas: water conservation, energy conservation, waste management, and pollution prevention. Then they designed and created their own "eco-wheel," one of the cleverest ways I have seen a program like this explained. Click on the wheel at this link, and it will rotate through each of the focus areas, explaining what they do to reduce, reuse, and recycle, and, in a few words, the positive result.

Easy for a small brew-pub in Oregon you say, but would never work for your company? Try it. Try giving free bicycles to employees in one division or one location as a pilot, and see how it works. No money you say? Try the marketing budget -- your customers learn a lot more about you if you show them you are green on a bicycle than if you tell them on a large freeway advertisement. (The irony of the football field-sized billboard on the side of the Oakland airport, fully lit up, 24/7, that states "I will unplug stuff more" leaves me in awe every time I see it.)

If you are not yet convinced to pilot a free bicycle program, stop by Ashland, Oregon, take in the surroundings, and appreciate them. Then have a beer at the Standing Stone Brewery and think about how your company can help preserve the landscapes, lifestyles and livelihoods we are lucky to enjoy now.

If you get stuck, start with bikes.

Stephen Linaweaver is associate principal at GreenOrder, an LRN Company. GreenOrder is a strategy and management consulting firm that, since 2000, has helped leading companies turn environmental innovation into business value. 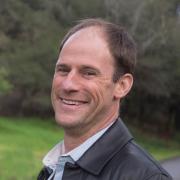 Reputation matters -- but which part?

Redesigning the World for a User-Friendly Future

See all by Stephen Linaweaver