Our water's newest threat: PFCs, and how to treat for them

This article is sponsored by Evoqua.

America’s history of industrial environmental impact is catching up with our aging water infrastructure. Increasingly, chemicals used for everything from pipeline protection to firefighting are appearing in alarming concentrations in the drinking water that comes from taps in millions of American homes.

Hexavalent chromium or Chrome VI is a naturally occurring as well as manmade contaminant in groundwater. It is one of the more common pollutants. Since 1993, when high levels of Chromium-VI were discovered leaching into groundwater from a gas pipeline compression station in California’s Mojave Desert, laboratory tests have detected this suspected carcinogen in 31 of 35 American cities.

It is estimated that 74 million Americans in 42 states are drinking chromium-polluted tap water. California implemented a 10 parts per billion Maximum Contaminant Level (MCL) for Chrome VI in 2015, but delayed enforcement until 2020 because of its severe drought issues. The EPA has set a national MCL for total chromium of 100 ppb, which includes Chrome VI and Chrome III, and is reviewing the toxicology for a potential MCL for Chrome VI by itself.

It is estimated that 74 million Americans in 42 states are drinking chromium-polluted tap water.

Lead is a more recent toxic offender. Lead contamination in the municipal water supply of Flint, Michigan, recently triggered a national outcry and federal legislation aimed directly at remedying the emergency in Flint and similar communities.

In the early 2000s, lead in the Washington, D.C., drinking water exceeded two or three times Flint concentrations as a result of its water purveyor’s changes in the disinfection system to meet other EPA drinking water disinfection byproduct requirements. This outbreak was characterized as 20 to 30 times worse than Flint, based on "the number of people, the duration of exposure and the population harmed."

A recent USA Today article indicated that nearly 20 percent of U.S. water systems tested above the EPA’s lead "action level" of 15 parts per billion, based upon recent analysis of EPA data. The EPA continually has been revising its "Lead and Copper Rule" of 1991 to provide more lead monitoring, and to aid water purveyors in controlling corrosion within their water systems.

New pollutants on the block: PFCs

The latest in this trend is a group of chemicals known as Perfluorinated Alkyl Substances, or PFASs (also known as Perfluoro Compounds or PFCs). Originally developed to help repel stains and improve the effectiveness of firefighting chemicals, these substances have leached into groundwater near factories, military bases and other sites where they have been used heavily.

Because PFCs persist for years in the environment as well as the tissues of the human body, the concern is still growing.

More than 16 million Americans drink water contaminated with these toxic chemicals, according to new research from Harvard University. PFCs have been linked to cancers, hormone fluctuations, immune system disorders, high cholesterol and obesity. The EPA has been working with companies since 2000 to phase out PFOA and PFOS, and to reduce the environmental and human health impacts of other PFCs.

In addition, some state agencies are reviewing current PFC research findings from NIEHS and others, to help assess and evaluate the impact of these chemicals on human health in their communities. However, because PFCs persist for years in the environment as well as the tissues of the human body, the concern is still growing.

Two specific PFASs have come under recent scrutiny: perfluorooctanesulfonic acid (PFOS) and perfluorooctanoic acid (PFOA). A Harvard study recently found elevated levels of these two chemicals in 194 out of 4,864 water supplies in 33 states. The U.S. EPA has established health advisory limits of 70 parts per trillion for single or combined concentrations of PFOA and PFOS in drinking water, based on the agency’s own assessment of current research. 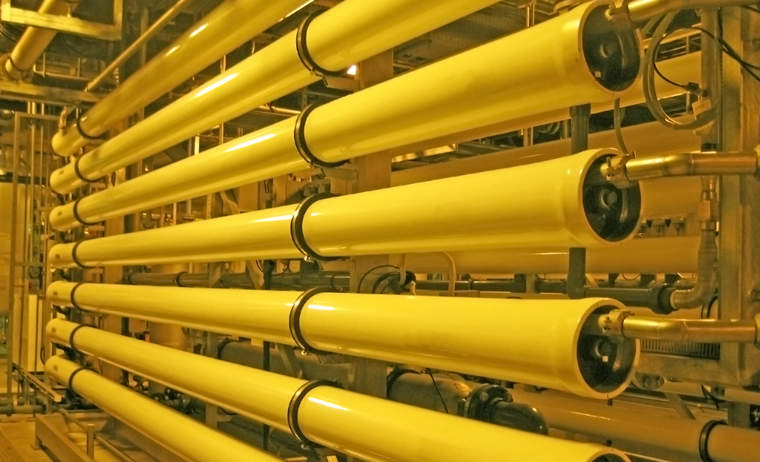 With this information in hand, municipal water system managers and hydrologists are aggressively testing and treating water sources for PFOA and PFOS in watersheds near military bases and manufacturing sites, as well as other sites that use these compounds in their production.

GAC: Proven effective in the field

For treating PFOA and PFOS in drinking water, the EPA recommends high-pressure membrane systems, such as reverse osmosis (RO), and activated carbon. A third possibility, ion exchange resins, also may provide good removal and is being studied.

Of the two current recommended technologies, granular activated carbon (GAC) has the edge over RO for most users. Unlike RO, which creates a stream of concentrated contaminants that must be disposed of, GAC removes contaminants from the stream and sequesters them in the carbon bed. When the carbon is exhausted, it is removed to a recycling facility where it is thermally reactivated and returned to service.

Evoqua Water Technologies successfully has proven in the field that GAC reduces PFOA and PFOS contaminants to levels below the EPA guidelines.

Municipal water system managers and hydrologists are aggressively testing and treating water sources for PFOA and PFOS in watersheds near military bases and manufacturing sites.

For more than 40 years, Evoqua has been active in treating groundwater for the removal of organic and inorganic impurities such as PFOS and PFOA. What sets Evoqua apart is the broad range of technologies and services offered that provide customers with the best overall value. With each technical solution, an array of field engineers is available to help set up, start up and even operate the equipment.

Several Granular Activated Carbon (GAC) solutions are available for treatment of PFCs in groundwater. One of the most cost-effective of these options for PFAS removal comes from coconuts: AquaCarb CX enhanced coconut shell GAC. It combines the benefits of an activated carbon with the high micropore structure of coconut shell, with faster kinetics comparable to bituminous coal.

The result is an excellent capacity for difficult-to-adsorb organics such as PFOA, PFOS and other PFCs, as well as adsorptive performance for other background organics.

While some of these contaminant issues seem new, communities across the U.S. have been facing them for more than 100 years, protecting drinking water and removing contaminants from the environment. While the industry’s understanding of the extent of PFC contamination along with its effect on health are still developing, municipal water system managers know dedicated resources are available to help them stay at the forefront of prevention and remediation for decades to come.

The road to eliminating fluorinated chemicals in food packaging

5 lessons on how to tackle toxics from DuPont, 3M and H&M

The PFAS and the furious: the new and deserved scrutiny on the 'forever chemicals'

Chlorine: Protecting human health for more than a century