Washing with Dove soap and spreading Hellmann’s mayonnaise on your sandwich might be good for the environment.

What?  Dove and Hellmann’s are products of Unilever the corporation with the very best track record in reducing greenhouse gas emissions and avoiding deforestation in its supply chain, according to  a report from Oxfam.

Associated British Foods, which sells Twinings Tea, Mazola corn oil and Karo syrup, has the worst record among the 10 biggest consumer brands, according to Oxfam’s 2016  Behind the Brands ranking. Danone, maker of Danone and Dannon dairy products, had the second worst.

Just how much more attention companies pay to their supply chains in recent years is evident in how these Behind the Brands scores have changed over the past three years.

Oxfam said just about all of the 10 biggest consumer brand companies have doubled down on their activity to halt deforestation and reduce emissions from agricultural supply chains in the last three years, making vast improvements over past practices. 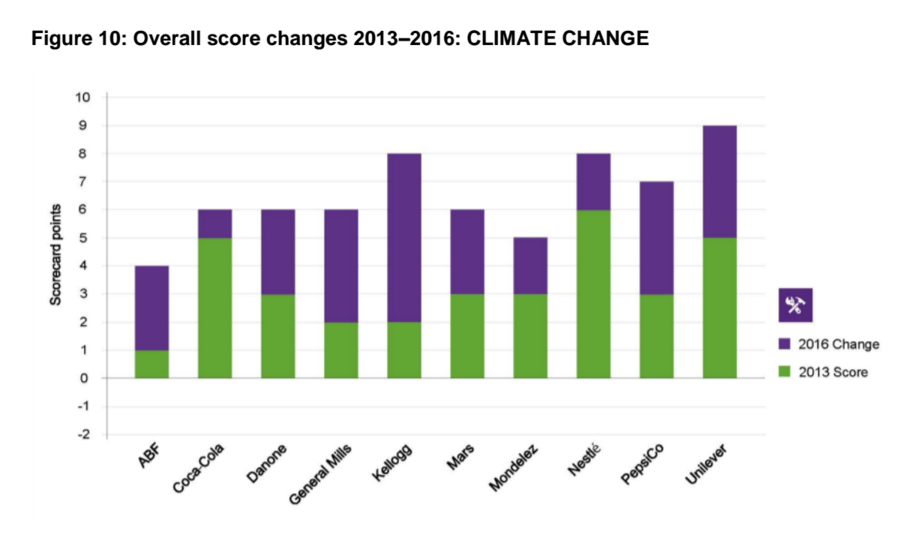 And they've helped improve conditions for workers in the supply chains, although some more than others and, for sure, more needs to be done.

"Given the inequalities and injustices in the food chain that leave millions of people at risk of being food insecure, especially small-scale producers, the ‘Big 10’ must use their power to transform how food is produced, traded and processed," Oxfam said.

The Behind the Brands ratings, whether agreed with or not, seem to influence at least some consumer behavior — or that is why Oxfam issues them in the hope that consumer pressure will move companies to act.

Monique van Zijl, campaign manager for Behind the Brands, added, "These food industry giants all demonstrated that they do listen to consumers by making some bold policy commitments. We hope this will inspire others to follow suit."

But big jumps in corporate actions to alleviate greenhouse gas emissions in their supply chains is also undoubtedly the result of the power of the COP21 climate talks in Paris, where businesses were present and involved much more than at any previous UN climate gathering.

General Mills, which doesn't rank high in the Oxfam report, nonetheless made major new supply chain commitments in the run up to COP 21 when it announced plans to cut greenhouse gas emissions across its entire business, starting at farms, by 28 percent within 10 years. The maker of Cheerios, Haagen Dazs ice cream, Pillsbury cake mixes and dozens of other products appears third from last in the Oxfam scoring.

"Now it’s crucial for the ‘Big 10’ to substantially change their business models to make good on these promises," van Zijl said.

For sure, not all brand companies pay attention to abuses of people and planet happening in their supply chains. And these corporations as recently as half a decade ago had arguably done little to influence their suppliers' behavior with respect to environment, land grabs and workers' livelihoods.

Moreover, history is full of horrendous and exploitative actions when corporate interest in a land, resource or agricultural product in another country led to human rights abuses (not to mention U.S. government interference on the corporation's behalf.)

Oxfam has shone a light on the fact that farmers in developing countries, particularly smallholder farmers, often live on the edge of poverty even as they supply U.S. and European consumers with food.

But there's also no question that such brands have woken up to their responsibilities in helping to alleviate environmental degradation and worker abuses in countries where they depend on suppliers.

But there's also no question that such brands have woken up to their responsibilities in helping to alleviate environmental degradation and worker abuses in countries where they depend on suppliers.  As one notable example, customers of palm oil — which include the big food and consumer goods companies — have banded together to form the Roundtable for Sustainable Palm Oil and committed to not buy from palm oil producers who deforest lands.

Kellogg and Mars, which rank fourth and fifth respectively in the latest Oxfam ranking, are part of the Roundtable and limit palm oil purchases to suppliers who agree to the sustainable practices of avoiding clearcutting. Mars — the maker of M&M candies, Uncle Ben's rice and other products, and Kellogg, whose breakfast cereals are found in many U.S. kitchens, also set science-based emissions reduction goals. Mars produces zero carbon emissions in its own operations and is now tackling emissions across its vast supply chain which includes dairy and cocoa farmers.

Kellogg is working with supply chains to bolster the livelihood of 500,000 farmers through training in sustainable agriculture, literacy and business.

Unilever and Nestle stood out in Oxfam's report  as doing the most to work with their supply chains to end deforestation, reduce the greenhouse gas emissions that result from the growing and processing of food and helping workers improve their livelihoods, particularly smallholder farmers and women farmers. 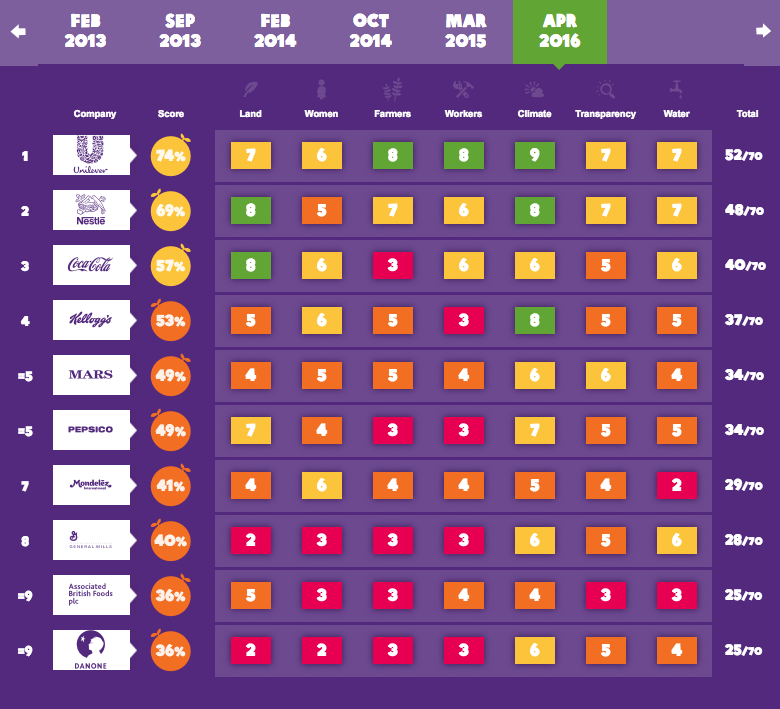 For all of them, goals grew bigger and bolder in the past year.

General Mills Chief Sustainability Officer Jerry Lynch told GreenBiz back when the 28 percent across-the-business emissions reduction goal was announced that COP21 was key to its stepped up commitment this year.

"The timing was in the context of this being a big year for doing something about climate change, with the Paris meeting coming up," Lynch said back then. "The driver was, what does science tells us we need to do?"

Mars committed to transition to renewable energy in all global operations and to send zero waste to landfills in conducting business throughout its value chain.

Coca-Cola, Nestle and PepsiCo scored highest in land rights — or making sure their suppliers are not grabbing land from indigenous farmers, which for decades had been common practice.

In the fall of 2013, Davis said, Oxfam campaigned for zero tolerance for land grabs in the supply chains of Coca-Cola, PepsiCo and Associated British Foods because these three companies are significant buyers of surgar so could exercise immense power in putting an end to land grabs in their supply chains. About 200,000 consumer actions, mostly social media mentions, urged the companies to change their policies.

Companies listened to the supporters. On, November 8, 2013 Coca-Cola fully committed to zero tolerance to land grabs and announced a series of steps to address the issue, followed by PepsiCo on March 18, 2014 and Illovo.

"And companies listened to the supporters. On, November 8, 2013 Coca-Cola fully committed to zero tolerance to land grabs and announced a series of steps to address the issue, followed by PepsiCo on March 18, 2014 and Illovo, a subsidiary Associated British Foods in 2015 who both made a similar commitment. Illovo is Africa's biggest cane sugar producer," Davis said.

Oxfam cited Kellogg and Unilever for having improved the most on all criteria over the three years since Behind the Brands began, with Kellogg’s score across all these things rising 30 percent and Unilever’s 26 percent.

Laggards were Associated British Foods and Danone, which according to the rankings have changed little in three years.

Oxfam began its Behind the Brands campaign in 2013 based on a belief in the power of consumers and their purchases to change corporate behavior.

In that initial year, one Behind the Brands campaign focused on urging companies to address the inequality women face within their supply chains. Oxfam said it called on the three biggest chocolate companies, Mars, Mondelez and Nestle, to lead by ensuring women cocoa farmers receive fair opportunities.

"There were more than 100,000 consumers actions taken to support this campaign. In response Mars, Mondelez and Nestle all committed to address inequality facing women cocoa farmers and released detailed action plans in the spring of 2014 describing the steps they will take to implement this promise. Beyond independent action, all three companies are committed to Cocoa Action, a multi-stakeholder effort to promote sustainable cocoa sourcing and development," Oxfam press officer Becky Davis said.

But Oxfam acknowledged that all 10 companies had made progress.  To wit: