Will we be able to verify the Paris climate accord? Right now, science is not up to the task, say the people in charge of assessing our annual emissions of CO2.

There is, they say, no sure way of independently verifying whether national governments are telling the truth about their own emissions or of knowing by how much global anthropogenic emissions are actually increasing.

And that is distinctly alarming, given the contradiction between reports that anthropogenic emissions have stopped rising and atmospheric measurements showing that annual increases in CO2 levels have reached record levels.

Climate negotiators are committed to concluding a rule book for implementing the Paris Agreement at their next annual conference, in Katowice, Poland, in December. Central to that will be an agreed plan to monitor, report and verify the pledges made by almost 200 countries.

It will require, as Edinburgh University’s Paul Palmer has put it, "looking for small, gradual reductions of large numbers; so we need to make sure we get the numbers right." But the science of accurate carbon accounting is in its infancy. While international efforts are aimed at helping developing nations gear up to the task, it is far from clear that just having more carbon counters can fix the gaps in the data.

While international efforts are aimed at helping developing nations gear up to the task, it is far from clear that just having more carbon counters can fix the gaps in the data.

Even developed nations with lots of climate scientists do not deliver demonstrably reliable emission statistics, according to Sourish Basu, a research scientist at the U.S. National Oceanic and Atmospheric Administration (NOAA). He reported in 2016 that national CO2 emissions are only known "to within 5-10 percent for most developed countries," while the error bars on declarations by developing countries are "larger by unknown amounts."

Until now, national figures have been taken largely on trust. But with the rubber about to hit the road on climate accounting, the emissions declarations of countries such as China, the world’s largest emitter, are being increasingly questioned. The potential for climate conflicts over who is putting what up their power station chimneys and out their car and truck exhaust pipes seems set to grow.

Accurate carbon counting has two practical goals for the Paris Agreement. The first is to establish the current trends and future trajectories of global emissions, so we can chart whether the world is on target for restricting global warming to less than 2 degrees Celsius. The second is to determine whether individual nations are meeting their Paris promises.

Good verifiable data is essential to allow signatories of the agreement to assess progress and agree on new targets, which they are pledged to do every five years. But right now, even verifying total global emissions is out of reach, according to some researchers.

Good verifiable data is essential to allow signatories of the agreement to assess progress and agree on new targets, which they are pledged to do every five years.

The main tool for independent verification is measuring trends in the concentration of CO2 in the atmosphere. Statistical models can predict the likely impact of anthropogenic emissions on this concentration. But working backward — estimating emissions from measurements of atmospheric concentrations — is harder. This is because it is not only human emissions that fluctuate from year to year; so, too, does nature’s carbon cycle. There are large annual changes in CO2 flows between the atmosphere, the ocean and terrestrial ecosystems such as forests. Some years, emissions from nature exceed the amount absorbed. In other years, it is the other way around. 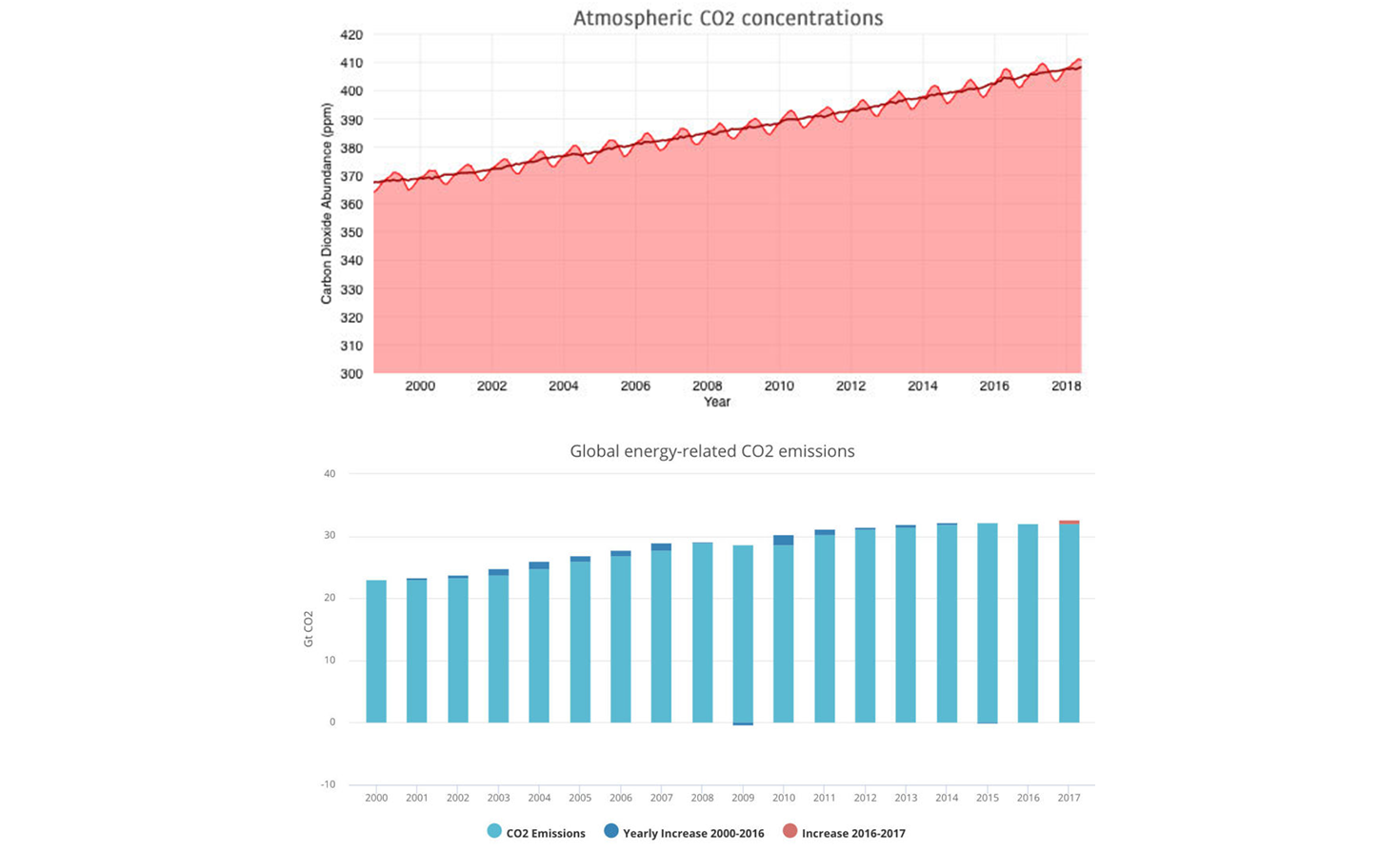 This year-on-year imbalance sometimes can be more than 3 billion tons of CO2, or nearly 10 percent of annual anthropogenic emissions, according to Glen Peters, senior researcher at the Center for International Climate Research in Oslo. But because we don’t know the actual figure with any accuracy, the contribution of anthropogenic emissions in any given year is fuzzy.

In a paper in Nature late last year, Peters and fellow participants in the Global Carbon Project, a network of researchers, warned parties to the Paris Agreement that "verification [of man-made emissions] will only be possible if we can fully filter out the background variability… a challenge that still escapes us."

Events in the past four years illustrate the problem, Peters told Yale Environment 360. According to national declarations, CO2 emissions from burning fossil fuels and industry have been more or less stable since 2014 — the first time that has been achieved since detailed records began. But this good news has not been reflected in atmospheric concentrations of CO2. Since 2014, there have been record annual increases of CO2 levels in the air, which grew by around 3 parts per million in 2015 and 2016 and by an estimated 2.5 ppm in 2017 — all well above the annual average increase in the past decade of 2.1 ppm.

So what was going on? Were nations telling lies about their emissions, or was nature up to its tricks?

The working hypothesis is the latter, said Peters. There was a strong El Niño, the periodic climate phenomenon that makes the tropical climate hotter and drier, adding to CO2 releases from forests. But how much, we actually don’t know.

Indeed, at present, we know remarkably little, either about how much CO2 healthy growing forests, vegetation and soils absorb or about emissions from land use changes such as deforestation. Both, according to Almut Arneth of the Karlsruhe Institute of Technology, may be larger than generally assumed. Scientists don’t even agree whether, taken overall, tropical forests are a sink or a source of atmospheric CO2, said Alessandro Baccini of the Woods Hole Research Center in Falmouth, Massachusetts.

That means that we cannot verify that anthropogenic emissions were as stable as nations insist. And in their Nature paper, Peters and colleagues said that sorting all this out could take a decade. That’s too long for the signatories of the Paris Agreement, who want accurate emissions assessments every five years. That means that, at present, there is no way that atmospheric modelers will be able to verify whether one set of Paris emissions targets are working before the next set are introduced. And that is just the global picture. If things go wrong, figuring out which nations might be to blame for backsliding could be even harder.

At present, there is no way that atmospheric modelers will be able to verify whether one set of Paris emissions targets are working before the next set are introduced.

Are the current slack rules on reporting emissions in effect covering the tracks of rogue emitters? In the West, there is always a tendency to question Chinese data, and with some justification. A few weeks ago, an NGO revealed that undeclared emissions from China likely were responsible for a spike in emissions of a banned, ozone-depleting chlorofluorocarbon refrigerant, CFC-11. If China’s big polluters will cheat the ozone layer, maybe they will cheat the climate, too, critics say.

Chinese coal-burning statistics are widely seen as unreliable. Critics have pointed out that the declarations on coal-burning made by Beijing to climate negotiators are often lower than totals derived from provincial data. There could be some double counting in the provincial statistics, but the error bars are astounding — calculated to be as high as 15.6 percent in 2012.

But before we cry foul, there is another factor to consider. Chinese coal generally has a much lower carbon content than typical coal burned around the world. So every ton burned releases less CO2 — on average 40 percent lower (PDF) than the values used in calculations by the United Nations' Intergovernmental Panel on Climate Change (IPCC), according to Zhu Liu of Harvard University.

Put these conflicting signals together and Zhu estimates that Chinese emissions were 14 percent lower in 2013 than previous estimates. That is good news, of course. But such uncertainties will make disentangling trends in future emissions more difficult, both in the case of China and globally.

Corinne Le Quere, professor of climate change science at the University of East Anglia in Britain, reckons that better measurements and modeling of anthropogenic emissions could help. But to reduce the time taken to verify small changes in anthropogenic emissions to the five years required by the Paris Agreement would be a much bigger ask, she said, requiring a step-change in understanding about complex processes, such as the effects of wildfires.

Given the events of the current long, hot summer, that is doubly worrying. It suggests it could be many years before we know the carbon impact of the explosion of wildfires across the Northern Hemisphere in recent years — and whether they might be masking unseen industrial emissions.

CO2 from burning coal, oil or natural gas, which has been buried underground for millions of years, is different from CO2 newly emitted by today’s biological processes. The differences lie in the content of the radioactive isotope carbon-14, which is generated by cosmic rays hitting the upper atmosphere. Carbon-14 is then absorbed into plants. It has a half-life of 5,700 years. So once the plant dies, the carbon-14 content of its remains gradually decays. In fossil fuels — plant matter that has been underground for millions of years — the carbon-14 content is very low.

Basu said that in experiments, about 900 measurements by NOAA over North America have been able to pinpoint annual levels of U.S. CO2 emissions at better than 1 percent accuracy.

Such forensic examination of atmospheric CO2 is not done routinely. But Basu, of NOAA, said that in experiments, about 900 measurements by his agency over North America have been able to pinpoint annual levels of U.S. CO2 emissions at better than 1 percent accuracy. He said that calls by the National Academy of Sciences and others to extend the work — to 5,000 observations a year in the United States and more widely across the world — have so far fallen on deaf ears. But such a global network has the potential to transform emissions verification.

Finally, there is the really scary bit. We could, pessimists warn, be approaching the moment when action to cut our CO2 emissions no longer will halt climate change. That is, when warming will thaw permafrost, drain wetlands, and burn forests on a scale large enough to unleash strong positive feedbacks that keep adding to atmospheric CO2, regardless of our future actions. Researchers recently dubbed this new state "hothouse Earth."

The potential for such positive feedbacks has not so far been factored into most climate models, because nobody has been able to quantify how big they might be. But that is changing. Forthcoming IPCC reports will include them. A study published in July (PDF) by British modelers found they could kick in soon.

Edward Comyn-Platt of the U.K. Center for Ecology and Hydrology and colleagues calculate that positive feedbacks from carbon sinks such as permafrost and wetlands could deliver an extra 50 billion tons of carbon to the atmosphere in coming decades. The effect, they contend, would be to reduce by one-fifth the amount of CO2 that we could emit from our own activities if we hope to keep warming below 1.5 degrees C.

Le Quere said there is no evidence of such a tipping point so far. But she admitted it is hard to be sure, when our powers to attribute the reasons for rising CO2 levels in the atmosphere remain so poor.

Why methane is a large and underestimated threat to climate goals

The climate is changing. How are central banks responding?