This week, I find myself sitting squarely at the intersection of clarity and confusion when it comes to my perspective about what’s needed to transform our global energy systems.

I spent much of my 20s as an activist. I’ll never forget standing on Capitol Hill in Washington, D.C., in February 2009, shivering in the winter chill but warmed by the thrill of participating in an event called Power Shift. An unprecedented 12,000 young people, representing every U.S. state and congressional district, descended on the nation’s capital for a week of clean energy activism training and civil disobedience. It represented the first mass direct action about global warming in the nation’s history and resulted in the successful closure of the coal-fired power plant providing electricity to the U.S. Capitol building. 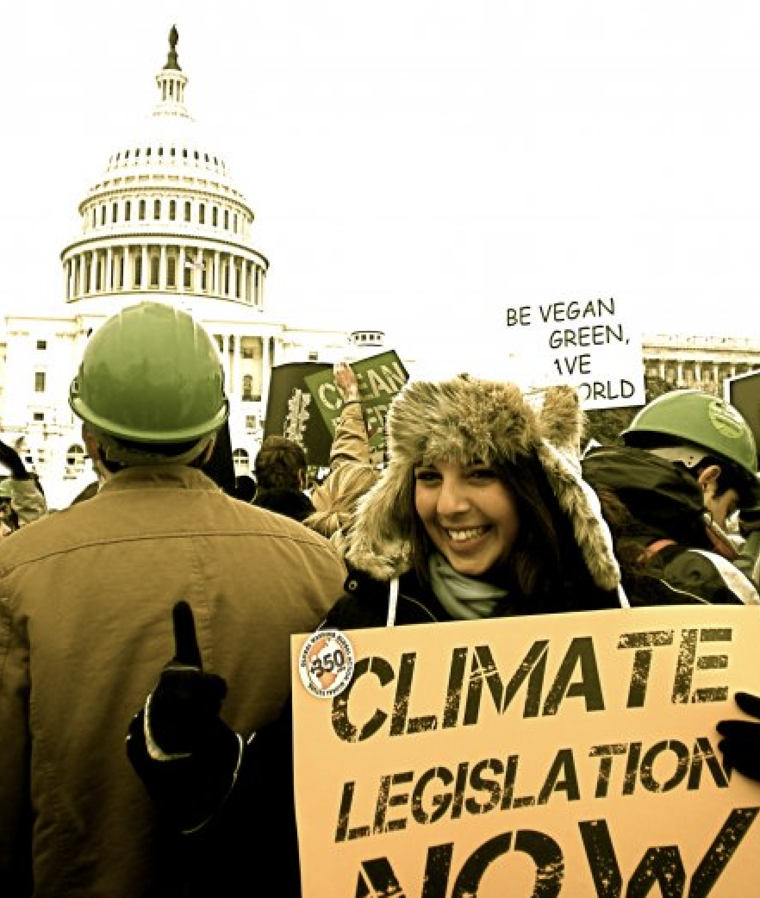 As I stood on the hill in my fuzzy winter hat (evidenced below), protest sign in hand, trained and prepared for the prospect of getting arrested, I believed wholeheartedly in the message we were chanting: "The enemy is profit. Together, we will stop it! Climate devastation will not be solved by corporations!"

I never would have imagined that, a decade later, my perspective would have shifted so significantly. Specifically, my belief that we have a better chance to build a sustainable future by engaging with as many companies, industries and individuals as possible. And that includes oil companies.

After all, accelerating the transition to a clean economy requires all hands on deck, including the hands of those that have contributed most significantly to the problems we are working to address.

That’s why last week’s headlines about the world’s largest fossil-fuel companies finally seeming to be taking their carbon emissions seriously caught me off-guard.

First, here’s a quick primer on what’s playing out. In case you haven’t been tracking Climate Action 100+ (CA100), it’s worth doing so. The investor-led initiative, which is pressing the world’s largest corporate greenhouse gas emitters to take necessary action on climate change, is backed by more than 300 investors, representing over $33 trillion in assets under management. Their focus is on the top 100 "systemically important emitters" — companies that together account for two-thirds of annual global industrial greenhouse gas emissions — in addition to 60 companies that have significant opportunities to drive the clean energy transition and may be at significant risk if they don’t.

CA100’s pitch could win over even the most jaded executives: "If you don’t change your business, you won’t have one down the line."

It is, dare I say, energizing to see the oil and gas industry waking up to the existential risk the climate crisis poses to its future. Case in point, here are two recent stories I’ve been tracking:

Now, neither of these stories reflects what I’d call true clean-economy leadership. As I’ve written in the past, even the most bold corporate climate commitments really ought to be considered the baseline, given the scale and scope of what’s needed.

And despite these promising signals of change, the oil and gas industry has a long way to go. As my colleague Sarah Golden wrote in a recent piece tracking the relationship between the oil supermajors and climate change, fossil fuel companies have a bad walk-to-talk ratio. Only 3 percent of the capital expenditures by the top five supermajors is dedicated to low-carbon technologies — and just 1.3 percent by the top 24 publicly listed oil companies.

Then there’s the 25 percent of lobbying and branding budgets being pumped into conflicting climate agendas, according to InfluenceMap — suggesting, as Golden writes, that many fossil fuel companies seem to be as concerned with pumping up their public image as preserving the planet. For example, despite BP’s overwhelming shareholder resolution last week, Chevron and Exxon shareholders failed to pass a series of climate-related proposals around science-based targets, public-health assessments and emissions reporting. Neither company supported the resolutions.

Every system looks different based on where you sit in relation to it. When viewed through one lens, fossil fuel companies are the problem.

Herein lies my inner struggle — one that all of us working to accelerate the clean economy must learn how to navigate: On the one hand, we must uphold the science-based, time-bound imperatives underlying the urgency of climate action; on the other, we must maintain an open mind and an open tent, including when traditionally bad actors are bringing well-meaning interim solutions to the table.

After all, it is human nature to think in binaries — to reduce one’s judgment to good-or-evil, or enough-or-not-enough. Case in point: During a recent meeting with a group of representatives from a petroleum association, it was a struggle for me to suspend the urge to question their seemingly genuine intent to evolve its members’ climate strategy.

But systems theory tells us that every system looks different based on where you sit in relation to it. In this case, when viewed through one lens, fossil fuel companies are the problem. Through another lens, these same companies seem to be trying to understand how to be part of the solution.

For those of us working to lead cross-sector collaboration and drive business transformation, there’s a balance to strike. This is a challenge I find myself navigating on a regular basis these days. My inner activist still lives, but in a new context that’s changing with the times.

What does a Paris-compliant climate change strategy look like?

Tracking the relationship between the oil supermajors and climate change