Research has found that the vast majority of the resources used by consumer products happens not in manufacturing, shipping or at their end of life, but in how they're used at home.

In order to help reduce the overall impact of these goods, and to help individuals lower their environmental impacts, Procter & Gamble next month will launch in the United States its Future Friendly campaign.

Future Friendly, which has been in place in the United Kingdom and Canada since 2007, is a multi-brand and multi-platform effort to raise awareness about greener products and greener practices. In addition to featuring the Future Friendly logo on the packages, P&G is also working to educate its customers on how best to reduce the impact of their daily lives.

One example offered by the company shows that nearly 80 percent of the energy used in the typical load of laundry comes from heating the water for the washing machine. Using cold water, and a Future Friendly-stamped product like Tide Coldwater, individuals can save that energy and cut their home energy bills at the same time.

In an interview in 2008, Procter & Gamble's Peter White explained how home use is responsible for the biggest overall energy use in a P&G product's lifecycle. The graphic below lays out the energy used at each phase of a product's life. The tall red bar represents customer energy use for laundry products, i.e. washing laundry in warm water. 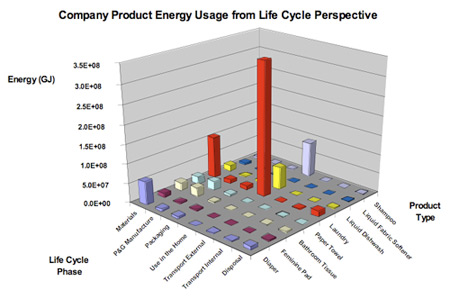 Products carrying the Future Friendly label will start appearing in retail stores in early April; P&G will also promote the campaign through television and newspaper ads. The goal is to achieve P&G's commitment to providing conservation education to at least 50 million U.S. households by the end of 2010. 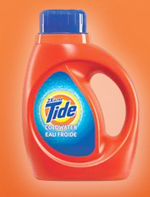 "With Future Friendly, we're trying to educate 'mainstream' consumers on how to conserve natural resources in their homes," Melanie Healey, P&G Group President, North America, said in a statement. "These consumers don't want any perceived trade-offs in performance and price. Instead, they want to purchase the brands they already know and trust and understand how using these products, and adopting other simple behavior changes within their homes, can help them lower their impact on the environment."

Along with the Future Friendly announcement, Procter & Gambel also today released the results of a survey conducted with Ipsos Public Affairs documenting the state of the green marketplace. Among the findings of the study:

• Nearly three in four (74 percent) report they would switch to another brand if it helped them conserve resources without having to pay more and a similar amount (69 percent) report they would recommend the product to others.
• More than a third (37 percent) cite the lack of enough information about what to do as the top reason preventing people from leading a more environmentally-friendly lifestyle.
• A majority (58 percent) would be at least very likely to change the way they do daily chores if it helped them reduce waste, save energy and save water in their homes.
• Saving money is the most frequently mentioned reason for why consumers would take measures to reduce waste, save energy and save water in their home (64 percent) followed closely by preserving resources for future generations (56 percent).

Procter & Gamble has long been focused on greening its operations and its products. In 2009 alone, the company expanded the number of concentrated laundry detergents it offers, won a green chemistry award for green chemicals, joined the Carbon Efficient Index of firms that are reducing their carbon footprints, and doubled its environmental goals for 2012.