Phoenix rising: Hand-in-hand, a city and a startup remap recycling

Usually, city dwellers want to get as far away from the local landfill as possible. But the city of Phoenix, Arizona is actively trying to get residents closely acquainted with their trash. The township argues that it's not just a bold move to divert waste — it will attract business to sixth-largest city in the U.S.

Repurposing waste as a resource is a pillar of Mayor Greg Stanton’s "Reimagine Phoenix" initiative, which aims to increase the city’s waste diversion rate to 40 percent by 2020 and to reach zero waste by 2050. To achieve this aggressive goal, Phoenix has entered into a three-year contract with Recyclebank, a startup with a successful track record of altering community behavior around waste. 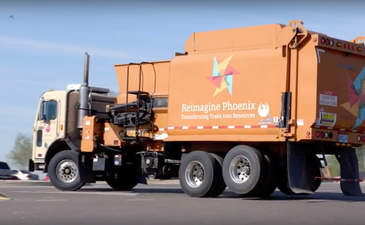 The B Corporation has the heaping task of making waste management entertaining, encouraging residents to make sustainable disposal habits through gamification and education. Recyclebank operates in 350 communities across 50 states and has been tapped by high-profile companies such as Disney to reduce their environmental impact. Its scorecard is high — It helped recycle nearly 1.5 billion pounds of waste in 2013 alone — but can it effectively motivate more than 1.5 million Phoenix residents to recycle smarter by the decade’s end?

"You have to incentivize, reward and reinforce the action," said Paul Winn Jr., executive vice president and general manager at Recyclebank. "Education plays a big role. Cities the size of Phoenix have lots of demographics and communicate in different ways. Some people want to engage on social media; others don’t have a smartphone or computer and need to talk to someone on the phone. We offer all of those options. And we have the content and education about how and why it’s important to recycle."

The more effectively residents recycle, the bigger the return for the city as a whole. In the short term, recycling reduces garbage truck trips to the landfill and saves municipal money. In the long view, it makes the city more attractive.

"From an economics development standpoint, you want to be associated with a city like Phoenix," said Winn. "Places like Seattle and San Francisco have demonstrated that when you align with sustainability initiatives, people, jobs and employers move there." Millennials want to move to cities with a high level of public engagement — and Apple and Google data centers follow.

The city’s management had the economy in mind when Reimagine Phoenix was launched in 2014, two years after Stanton’s term began. Although the city had one of the country’s longest-running, single-stream curbside recycling programs, Phoenix’s waste diversion rate at that point was 16 percent, compared to the national average of 34.1 percent.

"We had been recycling for about 25 years," said Brandie Barrett, Phoenix’s deputy director of public works. And yet, "We serviced about 1 million tons of trash every year and had 125 trucks traveling every day to landfill."

A "dumpster dive" into Phoenix’s waste stream found that 15 percent of what was going to landfill could be recycled, a potential value of $4.5 million. The recycling stream itself had a 21 percent contamination rate, which cost the city $1 million to sort.

In the short term, recycling reduces garbage truck trips to the landfill and saves municipal money. In the long view, it makes the city more attractive.

Phoenix began to tackle the problem by enticing residents with a "Save as You Reduce and Recycle Program," which offers $3 savings off monthly waste bills for downsizing curbside trash bins from 60 gallons to 50 gallons. It also offered a green organics service to collect organic materials such as grass, shrubs and tree clippings to be mulched and sold as compost — a boon for households with landscaping maintenance on large properties. These efforts, along with an education campaign demystifying what can and can't go in the bin, moved the recycling needle to 20 percent by 2015.

Community outreach was needed to move the needle further towards zero waste, but the city’s education team was limited to a staff of six servicing 400,000 households over 520 square miles. Barrett said the public works office needed to be "strategic and smart" about their next steps.

In June, the Phoenix City Council approved up to $10 million to encourage and engage residents in recycling, but not everyone was happy to foot the bill. In response, City Manager Ed Zuercher said, "It avoids landfilling fees... and creates revenue to the city by being sold on the recycling market. So I just want to clarify it’s not about feeling good, it’s actually a solid business decision."

While Recyclebank’s public-facing platform is all about engagement, it’s built on serious data. The Marketing-as-a-Service platform leverages city demographic data, recycling education platforms and incentives, something Winn said "the city can’t do on its own." For starters, it helps save more than $400,000 on ineffective mailers that wind up in the recycling or trash bin.

Recyclebank turns recycling efforts into badges and points that can be used for gift cards and discounts at local and national stores, donations and community-centered giveaways. Turning recycling into tangible rewards creates a positive feedback loop around the circular economy, helping Americans reach a tipping point around wasteful habits. The platform borrows from popular online games created by Zynga, most often played by women age 25-44 who are also heads of families in charge of household recycling.

"Today, we collect and employ three types of data in support of our client initiatives," said Winn. "As RFID matured and technology like GPS became mainstream in the waste industry, we are able to collect and analyze data from our [municipal] client’s programs such as waste and recycling tonnage, participation and in some cases contamination to assist in optimizing our education and engagement platform." It also studies the city’s residential demographics to customize its service platform, and analyzes participation in recycling incentives.

The public-private partnership is tied to Phoenix’s participation in the Circular Economy 100 (CE100), an Ellen MacArthur Foundation-led group of corporates, governments and cities helping each other accelerate the transition to a circular economy.

As the world population careens towards 8 billion people by 2025, the CE100 calls for cities to transition to transition to cost- and energy-efficient circular models of reuse, repair, remanufacture and recycling.

The Phoenix City Council also approved the development of the 50-acre Resource Innovation Campus (RIC), an incubator space for developing emerging products and technologies from the city’s waste resources (like palm fronds, a fibrous, half-million dollar problem). The RIC has inspired similar international hubs in Guatemala, Lagos and Nigeria.

"Local government is having an impact where we live," said Barrett. "We need to continue to show the economic benefits in addition to the environmental benefits; the persuasive argument is an economic one."

Why businesses should think small on sustainable cities

Phoenix launches a hub for the circular economy

IF11: Recyclebank is Not Just Trash to Cash