The following is an excerpt from "Pig Tales: An Omnivore’s Quest for Sustainable Meat."

Whether we like it or not, all of us are part of a huge, international experiment on the effects of subtherapeutic antibiotics on resistance.

In one broad study, Lance Price of George Washington University coordinated the efforts of 33 scientists to trace the evolution of a harmless human variation of staph into a drug-resistant one. The project spanned 19 countries on four continents.

Price is in his 40s but looks a decade younger, with his buff physique and stylishly casual attire. He is an internationally respected leader in one of the most arcane sectors of microbiology, analyzing the genomes of bacteria and applying that knowledge to epidemiology.

Fortunately, Price also possesses the rare ability to translate convoluted scientific jargon and complex formulae into terms anyone can understand, which has made him a sought-after spokesman for scientists who are working to preserve antibiotics.

"The staph we traced started out in humans and at that point it was treatable with antibiotics," he told me when I visited him in his sparsely furnished office in downtown Washington, D.C. "About 40 years ago, it jumped into pigs, and it was in pigs that it became MRSA. From there it was passed on to farmers who tended the pigs. Now we are starting to see cases in people who have no exposure to pigs or other livestock carrying around the resistant pig bacteria." 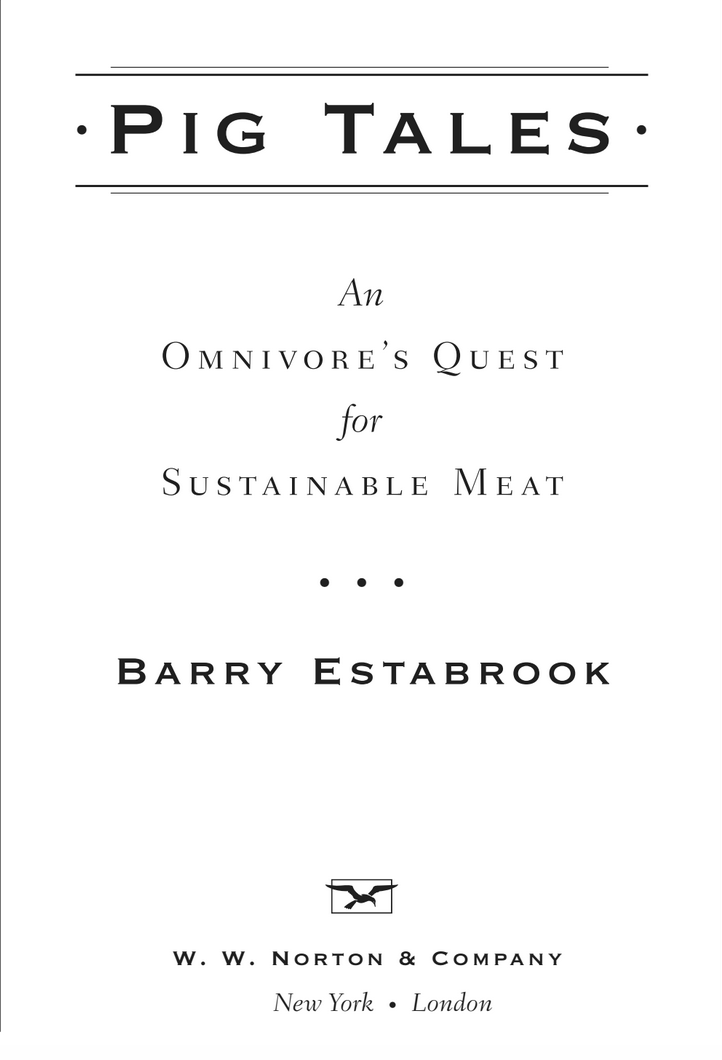 Recent research involving antibiotic-fed livestock other than pigs and pathogenic bacteria other than MRSA also provides a cautionary tale about how resistant bugs can travel from barns and coops to our bodies.

In studies between 2005 and 2012, Amee Manges, then a researcher at Montreal’s McGill University, found that supermarket chicken in Ontario and Quebec carried E. coli bacteria that bore a close genetic relation to strains that caused stubborn, drug-resistant urinary tract infections in 350 women she examined in Montreal. In 2011, antibiotic-resistant Salmonella in ground turkey sold by Cargill sickened 136 consumers in 35 states, killing one.

An examination of pork chops and ground pork published by Consumer Reports in 2012 showed that two-thirds of samples tested positive for Yersinia enterocolitica, a bacterium that causes food poisoning. Some meat was also contaminated with drug-resistant Salmonella, Staphylococcus and Listeria — all potentially fatal.

A team led by Lucie Dutil, another Canadian researcher, released a study in 2010 that showed a direct correlation between antibiotic use in chickens, antibiotic contamination of chicken in supermarkets and infections in humans.

Responding to a concern that the use of a family of antibiotics called cephalosporins, which treat a wide variety of human infections, in food-animal production was leading to resistance, the Quebec broiler chicken industry voluntarily stopped injecting cephalosporins into eggs in 2005 and 2006. Almost immediately, Dutil observed that levels of resistant Salmonella, a potentially fatal bacteria when consumed by humans, dropped dramatically in samples of chicken meat in grocery stores. A similar drop in resistant Salmonella infections in humans followed nearly in lockstep.

In a move that was perfect for Dutil’s research but not so good for the health of Canadians, the Quebec producers lifted their ban on antibiotic injection in 2007, and sure enough, the rates of resistant bacteria in chicken meat and the number of human infections rose immediately.

"The use of that drug had a powerful effect on the chicken meat and on human health, and the data could not have been better," said Price. "But we’ve known this since Stuart Levy did his chicken research nearly 40 years ago. Everybody in public health and medicine that studies this issue recognizes that antibiotic resistance is one of the greatest threats to public health that we face today."

He slammed his hand on his desk and raised his voice.

"So why am I still trying to convince people?"

The research of Scott Hurd is one of those reasons that hog farmers in the United States still believe their livelihoods would be threatened if they gave up administering low-level antibiotics.

Prior to his death in 2014, Hurd worked from a converted stable on the edge of the Iowa State University campus, where he taught and did research on food safety. He began his career three decades ago as a rural vet, mostly taking care of large farm animals in Pennsylvania. After a few years, he became frustrated with that life, mainly because farmers often failed to follow his recommendations, and returned to do graduate work in epidemiology at Michigan State.

From there he embarked on a career path followed by many in agribusiness, winding through a series of revolving doors between the USDA and academia, culminating when he spent a year as the department’s deputy undersecretary for food safety.

During his first week on the job in Washington in early 2008 he was instrumental in overseeing the largest meat recall in U.S. history after the infamous "downer cow incident" came to light. In that incident, cattle that were too sick to stand were repeatedly beaten, shocked with electrical prods and jabbed by lift-truck forks to get them on their feet long enough to be slaughtered for human consumption at California’s Westland/Hallmark slaughterhouse.

"Now, I never pick up the telephone when Caller ID shows a 202 area code," he told me, referring to the prefix of Washington, D.C., telephone numbers.

If Price is the unofficial spokesman for the faction trying to control the use of low-level antibiotics on farms, Hurd was his counterpoint, a vigorous defender of the practice. Hurd’s work became the basis of a key argument put forward by industry and veterinary groups who say that such minuscule odds mean that the benefits of subtherapeutic antibiotic use in livestock far outweigh the potential risks to human health.

It’s like saying, ‘Show me the leaf on the tobacco plant that caused this smoker’s cancer.’ You can’t do it, just like you can’t show anyone a case where you have an animal that produces a piece of meat that infects a person with untreatable bacteria.

Hurd was tall and thin, with a weathered face. He sweetened his strident advocacy of agriculture’s ways of using antibiotics with a dry, self-deprecating sense of humor. Telling me that research shows that sick pigs arriving at slaughterhouses are more likely to carry Salmonella than healthy animals and that administering drugs keeps pigs from getting sick in the first place, Hurd said that reducing antibiotic use will lead to increased rates of foodborne illness.

He accepted the notion that farmers should avoid using antibiotics strictly to promote growth, and he would be happier if all antibiotics given to livestock were administered under the auspices of a veterinarian, but he remained adamant that farmers be allowed to use low-dose antibiotic regimens.

"When you have a barn full of animals, you can’t really tell who is healthy and who is not," Hurd said. "We use antibiotics in a prophylactic or preventative way when we have reasonable evidence that there is illness or there will be illness."

His year in Washington convinced Hurd that the forces trying to ban subtherapeutic use of antibiotics on farms have an "extreme political agenda." He said that legislators like Congresswoman Louise Slaughter, a Democrat from upstate New York and a microbiologist by training, who has repeatedly tried to legislate limits on the use of the drugs in animals through her Preservation of Antibiotics for Medical Treatment Act, are motivated by a desire to keep agriculture in the Dark Ages and dependent on federal handouts.

"The people supporting that act are all from blue states," he said. "The liberal left thinks government can solve all the problems. They like to have people dependent on government, and the wealthy, well-educated farmer is not going to be that way."

Companies that sell animal drugs deny a connection between resistant bacteria found in livestock and humans.

"There isn’t sufficient data to draw the conclusions that attribute resistant bacteria in pork to the animals receiving antibiotics," said Ron Phillips, vice president of legislative and public affairs at the Animal Health Institute, a trade group representing Bayer, Pfizer, and other pharmaceutical companies.

"A lot of people want to talk about antibiotic resistance as if it is a big amorphous issue. It is, in fact, a series of discrete issues, where you have to look at specific bug/drug combinations and figure out what are the potential pathways for antibiotic-resistant material to transfer from animals to humans. Resistant bacteria are out there and can come from a lot of different sources."

That, Price told me, sounded to him a lot like the arguments the tobacco companies used to drag out when confronted by accusations that their product caused cancer.

"Claims like that are ridiculous," he said, laughing aloud. "It’s like saying, ‘Show me the leaf on the tobacco plant that caused this smoker’s cancer.’ You can’t do it, just like you can’t show anyone a case where you have an animal that produces a piece of meat that infects a person with untreatable bacteria. Guess what? We don’t have that piece of meat after it’s been eaten. They set up these impossible scenarios."

Tara Smith, who transferred from the University of Iowa to Kent State University in Ohio in 2013, accepts Hurd’s assertion that low-level regimens of antibiotics do prevent infections in confined swine, but she sees the need for their subtherapeutic use as the result of a flaw in the industrial methods of raising pork in this country.

"The way our system is set up now, you probably need to use those drugs to make a profit," she said. "You maximize the number of pigs that are in there and you need drugs to control the infections that result from concentrations of animals in small areas. But why can’t you change some of the other variables so that you can have a healthier pig facility overall and not need drugs?"

McDonald’s to cut antibiotics for chicken sold in U.S.

Can sharks, algae help win the war against superbugs?

Why Green Alternatives for the Food Industry are a Win-Win